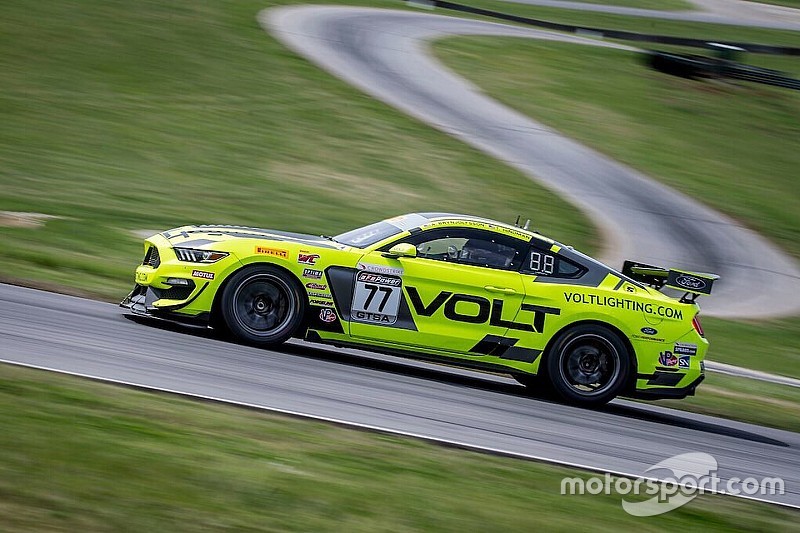 As in the GT category, the GTS saw an all-Mercedes AMG GT front row, with Shane Lewis in the Ranch Motorsport car he shares with Gar Robinson heading the Matt Fassnacht/Christian Szymczak Murillo Racing machine.

But at the start Scott Maxwell in the PF Racing Ford Mustang sprinted through from fourth to split the Benzes, and along the backstraight he outdragged the leader to take the lead with a beautifully late and controlled outbraking maneuver.

Harry Gottsacker threw his SIN R1 off the track and into a tire wall, and the front-end damage meant he couldn’t get back on track, thereby bringing out the full-course caution.

For the restart the Maxwell/Jade Buford Mustang would lead the two AMGs with Moritz Kranz fourth in the Muehlner Motorsports Porsche Cayman he co-drives for Gabriele Piana. Toby Grahovec lay fifth in the Classic BMW M4 ahead of Alan Brynjolfsson, co-driver to Trent Hindman, in the VOLT Mustang, while PWC veteran and former champion Andy Pilgrim, who is partnered with Lawson Aschenbach in the Blackdog SpeedShop Chevrolet Camaro, restarted seventh.

The restart on Lap 6 was clean, but Grahovec outpaced Franz’s Porsche down the back straight, and quickly moved onto the tail of Fassnacht. A lap later, Franz fell onto the grass, promoting Brynjolfsson’s Mustang into fifth, while Randy Mueller moved his Epic Motorsport BMW M4 onto the tail of Pilgrim’s Camaro and passed him on Lap 9.

Fassnacht’s attempts to pass Lewis for second went wrong when he outbraked himself and allowed Grahovec and Brynjolfson through, while Maxwell dived for pitroad at the first opportunity to hand over to Buford, and fellow-Mustang driver Brynjolfsson gave up his seat for Hindman. Soon after they rejoined the track, Hindman slipped ahead of Buford.

Meanwhile Grahovec and Mueller in the two M4s, having got around Lewis’ Mercedes, were now setting their fastest laps to try and pull a big enough gap to jump the Mustangs. Mueller and Lewis stopped on Lap 13, with Grahovec stopping a lap later. Co-driver Chris Ohmacht emerged in the lead but the charging Hindman on up-to-temp tires swept around the outside into Turn 1 to put the day-glo yellow VOLT Mustang into the lead.

By the time Ohmacht was up to speed, he was three seconds behind the leading Mustang and had his mirrors full of the GMG Racing Audi R8 of James Sofronas (started by Alex Welch) and #1 Camaro now with Aschenbach at the wheel. On Lap 17, Ohmacht could prevent the inevitable no longer and moved aside for the Audi and Chevy. A lap later, he also conceded fourth to the Murillo Mercedes of Symczak.

Hindman had a 5.8sec lead with 13mins still to go but the Sofronas vs Aschenbach for second place was as tight as ever although Sofronas laid down the fastest lap of the race on Lap 20 to edge his Audi a little bit farther away from Aschenbach.

Then out came the yellow for Keith Jensen stuffing his Cayman hard into a tire barrier, and the length of time to drag the car and repair the tire barrier brought out the checkered flag early.

Thus Hindman and Brynjolfsson delivered victory for VOLT Racing, ahead of Sofronas/Welch, Aschenbach/Pilgrim, Szymczak/Fassnacht. Ohmacht and Grahovec headed the all-Amateur category in fifth overall, with Ian James sixth in the Panoz Avezzano after a late pass on Buford’s PF Racing Mustang.

Sordo set to remain with Hyundai in 2020

Doug Didero to return to Oswego.