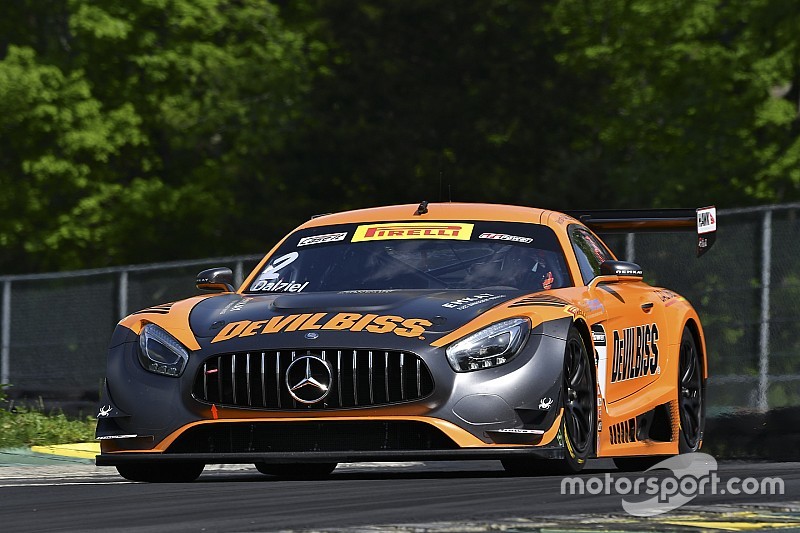 Race two of the Pirelli World Challenge SprintX weekend at Virginia was won by the CRP Racing Mercedes of Daniel Morad and Ryan Dalziel, but the race ended prematurely after a worrying crash that befell ex-F1 star Stefan Johansson.

From the rolling start the two Mercedes of Jeroen Bleekemolen and Morad led the packed field, with Morad going around the outside of Bleekemolen at Turn 1.

Jordan Taylor claimed third in the first of the Cadillacs, ahead of Spencer Pumpelly’s Audi and Ben Barnicoat’s McLaren and the leading Porsche of Laurens Vanthoor.

The race restarted with under 30 minutes go, with all mandatory pitstops still to be made. Morad made his escape again out front, with Bleekemolen doing likewise in second over Taylor, Pumpelly and Barnicoat – with that trio pitting at the first opportunity.

Pierre Kaffer (in for Pumpelly) won the race off pitroad, ahead of Alvaro Parente (in for Barnicoat) and Michael Cooper (in for Taylor).

Leader Morad pitted to hand over to Ryan Dalziel on lap 18, with Bleekemolen taking over in the lead until he pitted a few laps later to hand over to his amateur teammate Tim Pappas.

Parente and Cooper both worked their way past Kaffer in heavy traffic, and this elevated them to second- and third-place finishes respectively.

Saturday’s race winners Andrea Montermini and Daniel Mancinelli claimed fourth in their TR3 Ferrari, ahead of Kaffer and the R. Ferri-run 488 of Alex Riberas and Kyle Marcelli.

Bleekemolen/Pappas claimed the Pro-Am class, but slumped back to 10th overall.

The race ended under prematurely, and under yellow, when the Ferrari of former F1 star and Le Mans winner Stefan Johansson crashed heavily with the Porsche of Philip Bloom. Medical crews were called out on to the circuit. Eventually, both Johansson and Bloom were evaluated and released from the trackside medical center.

Exepected frontrunner Pat Long/Jorg Bergmeister was taken out of the race under yellow by the second Magnus Audi when Marco Seefried slammed into the back of the Wright Motorsports Porsche 911.