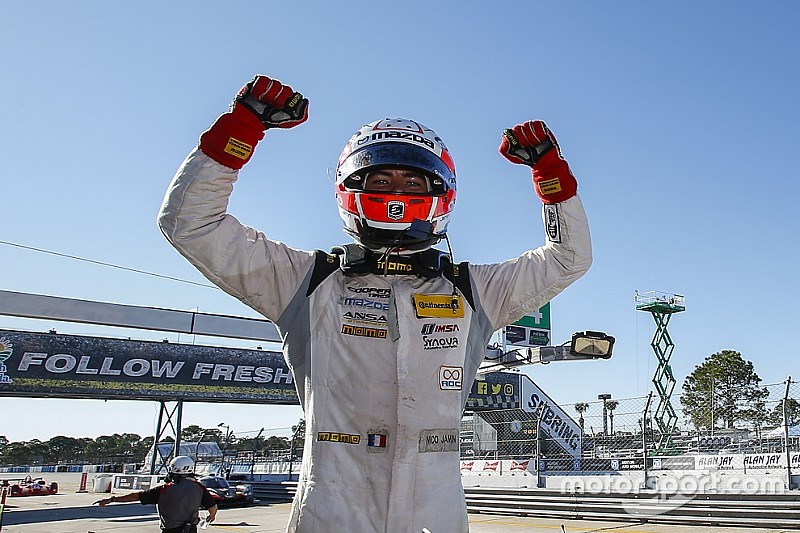 From the standing start, poleman Jamin was initially outdragged by fellow front row sitter Jeff Courtney’s Maserati, but Jamin clung to the inside line at Turn 1 to keep his lead in his KTM Xbow.

The Chevrolet Camaro of Lawson Aschenbach made a great start, and immediately exerted pressure on Courtney for second.

Ian James claimed fourth in the sole Panoz Avezzano following a strong getaway, ahead of Rodrigo Baptista’s Porsche Cayman. Title contender Baptista passed James with a neat move to wrest away fourth – but then Baptista ground to a halt just as he was closing in on Aschenbach.

That caused a full-course yellow, giving Courtney another shot at beating Jamin – whom he’d out-qualified yesterday – but Jamin got the hammer down at the restart.

Courtney kept Jamin honest in the closing stages, getting within 1s of the Frenchman but unable to get close enough to make a move. Aschenbach clung to third, weaving down the straight under strong pressure from James.

James made a bump-and-run move to grab the final spot on the podium on the last lap, and while Aschenbach repaid the contact, James clung on to third.

Jason Bell won the Am class with sixth position overall in his SIN R1 after a good early battle with Mark Klenin’s McLaren, which ended when Klenin took a wild grassy ride through the Esses and was forced to pit.