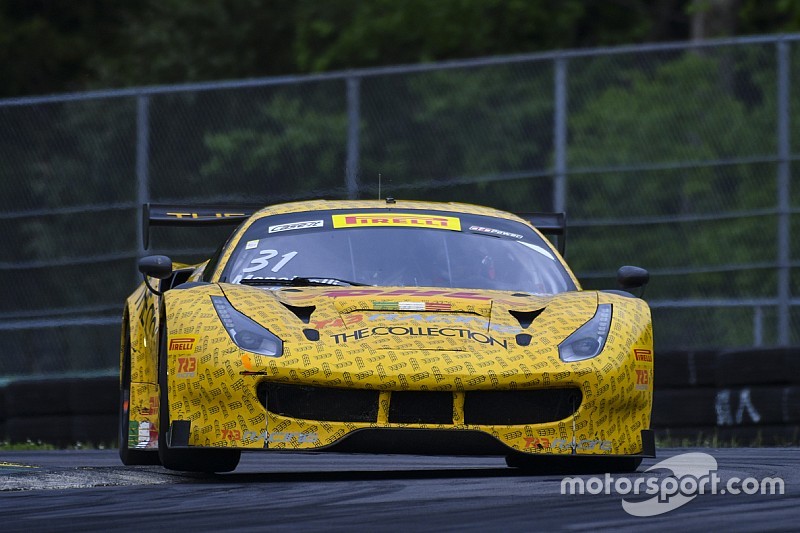 Daniel Mancinelli and Andrea Montermini won a chaotic opening SprintX round of the Pirelli World Challenge at Virginia International Racing in their TR3 Racing Ferrari 488, as new driver-change timing rules tripped up the top three teams.

Pole-sitter Mike Skeen (Audi) led the 32-car field at the rolling start, ahead of fellow front row starter Ryan Dalziel (Mercedes). The Ferrari 488 of Mancinelli held third, just ahead of the fast-starting Porsche 911 of Patrick Long who grabbed fourth from sixth on the grid.

But Long outbraked himself on the second tour, dropping him back to seventh, promoting Alex Riberas (Ferrari), Pierre Kaffer (Audi) and Johnny O’Connell (Cadillac).

Dalziel lost touch with Skeen when he was balked in the Esses by a GTS-class car, but there was even more drama when leader Skeen went off on lap 14, catching a curb and spinning across the track.

That promoted Dalziel to the lead, ahead of Mancinelli, Kaffer and O’Connell.

After his spin, which occurred just before half distance of the one-hour race, Skeen pitted to hand over to teammate Andrew Davis, which started the pitstop cycle.

Frontrunners Kaffer and Mancinelli then collided at high speed in the Esses, sending Kaffer spinning off wildly through the grass with broken right-rear suspension.

All that drama meant Daniel Morad, who took over the Mercedes from Dalziel, inherited a huge 8.7s lead over the Riberas/Kyle Marcelli Ferrari.

Jorg Bergmeister took over from Long and quickly sliced past Marcelli for second.

Ricky Taylor steered O’Connell’s Cadillac to fourth, ahead of the recovering Davis and Andrea Montermini (in for Mancinelli).

A full-course caution was called with 20 minutes remaining to recover the car of Martin Fuentes/Stefan Johansson Ferrari, which got stranded in a boggy puddle.

Leader Morad’s huge lead evaporated as a result of the yellow, with just one lapped car between himself and Bergmeister, but he made a rapid restart.

However, Bergmeister quickly latched on to Morad's tail just as news filtered through that seven cars – including the top three overall – were to be penalized with drive-through penalties for not spending long enough in pitlane during the driver changes.

Second-placed Bergmeister took his penalty straight away, with leader Morad taking another lap to observe his. Marcelli then led, but he too had to take a penalty.

Dalziel shrugged: “Apparently half the field was too short on their pitstops, but we don’t know. We think we were OK, but we had to take the penalty.”

All this promoted the Mancinelli/Montermini Ferrari, which had escaped the wild clash with Kaffer’s Audi, to the top spot, ahead of the Skeen/Davis Audi.

Davis – who was a late call-up to the drive – chased Montermini hard, and finished right on his tail after a frantic final lap.

The James Davison/Jonathan Summerton Lamborghini rocketed up to third, but got edged off the track in the closing laps by Laurens Vanthoor, in the Porsche he shared with James Sofronas.

Summerton also lost places to the Bentley of Yufeng Luo and Alexandre Imperatori and Porsche of Michael Schein and Jan Heylen.

Jordan Taylor/Michael Cooper finished an amazing seventh after their Cadillac ground to a halt on the warm-up lap and had to start from the back of the field, with Dalziel/Morad the first of the penalized cars home in eighth and Long/Bergmeister classified ninth.