Wilson walks away with Barber victory 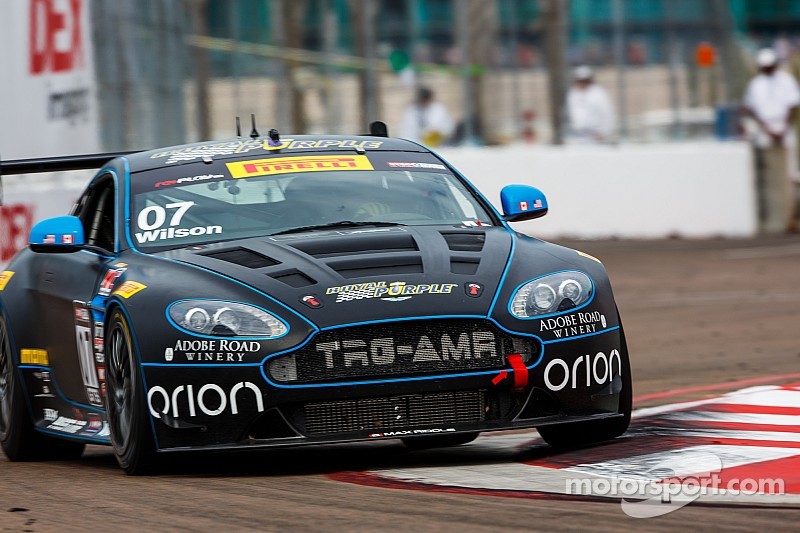 Kris Wilson was able to capitalize on small errors from those in front of him.

Normally, fourth on the grid isn’t the most ideal starting position in the Pirelli World Challenge, but having fifty minutes was enough for Kris Wilson in his Aston Martin Vantage GT4 as he was able to win the first of two GTS races at Barber Motorsports Park.

For the first half of the race it was great, but then the last half not so great because I was just driving around

Kris Wilson after taking the lead halfway through race

Wilson was behind a battle for the lead between polesitter Jack Baldwin’s Porsche Cayman and the other front row starter Ben Clucas and his Kia Optima. Clucas got the lead early and was having a fantastic dicing battle with Baldwin, but Wilson was able to get around Baldwin and then Clucas as their tires were a little worn from battling each other early.

“It was fun watching Ben and Jack battling it out and I could see Mark [Wilkins] lurking back behind us, just kind of chuckling, going ‘Okay, I’m taking it easy on my tires, I’m going to watch what goes on,’ and I was kind of sitting back doing the same thing behind Jack and Ben, and it just worked out where […] Ben kind of burned off his tires a little bit, got a little wide down in the hairpin and I ducked in underneath him and basically just kind of drove away at that point because Jack and Ben were battling behind me,” Wilson said.

After some hard battling at the end between Baldwin, Wilkins and Clucas, Clucas got the worst of it, hitting a barrier with only minutes to go and finishing eighth.

Wilson completely checked out on the field after gaining the lead, winning by over 15 seconds. After Wilson came Wilkins, Andrew Aquilante, who was the biggest benefactor of the contact Clucas had, Baldwin and Michael Cooper in a Chevrolet Camaro Z28.

There were a few mechanical failures in the race, Spencer Pumpelly’s Ford Mustang Boss 302 ended up in the grass early in the race while Dean Martin in another Boss 302 slowed dramatically on the front straight just past halfway.

Of note in the results was Nate Stacy. The 15-year-old from Owasso, OK finished his first GTS race in 13th place after starting 15th.

“I’m happy to finish the first race clean, just really happy that we got that finished and out of the way. Kind of got held up behind another car, kind of let the field get away from us, as soon as we cleared the car, we dropped time and we were gaining on the guys in front of us. It could have gone better, but I can’t complain for the first race,” Stacy said.

As for the victor, he had a rather philosophical look at how the race went for him.

“For the first half of the race it was great, but then the last half not so great because I was just driving around, it felt like a lapping session, but I mean, you’ve got to take those, right?”

“I was just truly trying to cruise, but I think these guys battling behind, that’s how the gap was grown. We did a long run purposely to see what the car was going to be like on the long run, and those are the lap times we were doing this morning on long runs,” Wilson said.

A Jordan F1 show car for sale in Québec