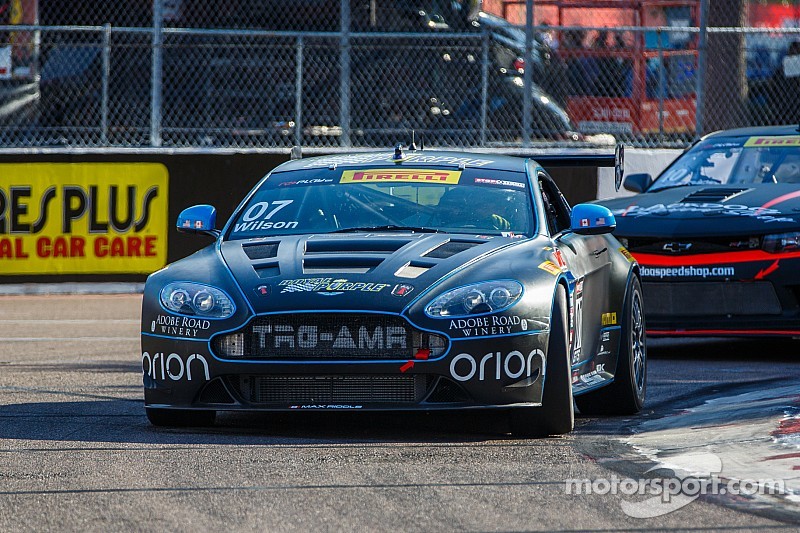 Mark Wilkins was second, while Andrew Aquilante was third.

Birmingham, Ala. - Kris Wilson, of Monument, Colo., won the Round 5 GTS race at the MOMO Grand Prix at Barber Motorsports Park presented by Porsche, part of the Honda Grand Prix of Alabama weekend. It's Wilson's second win of the season. Mark Wilkins, of Toronto, Ontario, was second, while Andrew Aquilante, of Chester Springs, Pa., was third.

From the rolling start, Ben Clucas, of Northampton, England, in the No. 36 DonorsChoose.Org Kinetic Motorsports/Kia Racing Kia Optima, who had started second on the grid, got a run on pole sitter Jack Baldwin, of Marietta, Ga., in the No. 73 RESET-MD GTSport Racing Porsche Cayman to take the lead into turn 1.

Tucking in behind Clucas and Baldwin were Wilson, in the 07 Orion/Royal Purple/LaSalle Solutions/PassTime USA TRG-AMR Aston Martin Vantage GT4 in third and Mark Wilkins, in the No. 38 PutOnTheBrakes.Org Kinetic Motorsports/Kia Racing Kia Optima in fourth. Through lap 1, Clucas maintained his lead over Baldwin, with Wilson, Wilkins and GTS Championship Points leader coming into Barber Dean Martin, of Westland, Mich., in the No. 50 Rehagen Racing/Picture Cars East Ford Mustang Boss 302 in fifth.

It was fun to watch Ben the young gun and Jack the wily veteran battle it out.

By lap 3, Baldwin started to close the gap on Clucas while Wilson pressured Baldwin from third position. By lap 5, Wilson had his best lap of 1:32.144 and began constant pressure on Baldwin, while the driver of the No. 73 closed up on the bumper of Clucas' No. 36 Optima.

Of note, Round 4 St. Petersburg winner Spencer Pumpelly, of Atlanta, Ga., in the No. 87 iTrackzone.com DWW Motorsports Ford Mustang Boss 302 dropped out of the race due to mechanical problems on lap 5. On lap 9, Wilson completed the pass over Baldwin on the outside of turn 1 only to have Baldwin strike back through turn 5 to take the position back. After 10 laps, Clucas maintained a slim lead over Baldwin and Wilson with Wilkins now catching the top three to make it a four-car battle. On lap 13, Wilson again passed Baldwin through turn 1, this time on the inside and the pass stuck as the driver of the 07 car took up the battle with Clucas. On Lap 16, both Clucas and Wilson drove off the track momentarily through turns 8 and 9 as both drivers battled for top spot.

Then as Clucas ran wide through turn 5 on lap 18, Wilson passed on the inside and set sail in the lead building up an almost immediate five-car gap over Clucas who now was being pressured by Baldwin. The pass by Wilson earned him the Cadillac ATS-V Best Move of the Race Award.

Through lap 19, Wilson had gapped Clucas by 1.5 seconds. The top five after lap 20 were Wilson, Clucas, Baldwin, Wilkins and back-to-back defending GTS class drivers' champion Lawson Aschenbach, of Palm Beach Gardens, Fla. , in the No. 1 Blackdog Speed Shop Chevrolet Z28, who had moved around Martin who ultimately retired due to contact between the two drivers.

While Clucas and Baldwin continued to battle, Wilson continued to pull away from the pack. By lap 23, Wilson was six seconds ahead of the field and this separation continued. At the same time as Wilson pulled away, Wilkins slowly closed on the Clucas, Baldwin duo in second and third. By lap 24 Wilkins began to apply pressure to Baldwin. The trio stayed in the same order until lap 27 when Wilkins found an opening and passed Baldwin in turn 8. The position change only lasted for one lap as Baldwin re-passed Wilkins in turn five to regain third position. Baldwin's move to repass Wilkins earned him the Invisible Glass Clean Pass of the Race Award.

By lap 29 the train from second had grown to include the trio of Aschenbach, Michael Cooper of Syosset, N.Y. in the No. 10 Blackdog Speed Shop Chevrolet Camaro Z28, and Andrew Aquilante of Chester Springs, Pa. in the No. 32 Phoenix Performance/Calvert Dynamics Ford Mustang Boss 302. Aquilante was able to ease past both Cooper in sixth and Aschenbach in fifth. These passes would matter for Aquilante as the race neared its end.

On lap 32 in turn 11 Baldwin got next to Clucas and as they made their way side-by-side through the turn, they made contact. The contact resulted in Clucas spinning off (but continuing on to eventually finish eighth) and Baldwin falling back to fourth. Wilkins assumed second with Aquilante gaining an opportunistic third. At the checkered flag the top five were Wilson, Wilkins, Aquilante, Baldwin, and Cooper in what was a wildly entertaining finish.

"We feel very lucky today to make it on the podium," said Aquilante. "It was a pretty good race from our stand point for our Mustang. After we qualified 10th we just didn't have the outright speed to be at the front. Once we made it through the interesting rolling start, we watched some guys getting three wide early. So we dropped back and watched the fireworks up front and at the end found ourselves in third at the finish. We were able to benefit for sure from the great battles taking place up front."

"It has a little bit of a slower start to the season than I would have liked," said Wilkins. "But the Kia Optima today was spectacular. Ben was up in front of me most of the day and drove the wheels off of the car. I took a little different approach with the idea of having some tires at the end of the race. And I think we did a good job of that. Obviously we capitalized on the contact between Ben and Jack. For us it is a great points finish in the manufacturers' championship which is our number one priority. The Optima is built in Georgia and we had some employees from the plant with us today. We are pleased we were able to showcase the car and have such a positive day. It is a long season and you have to work hard to stay out of trouble so you can be there at the end. We will have a good place to start from tomorrow and we look to put on another fantastic race like we did today."

"It was a great race," said Wilson. "It was fun to watch Ben the young gun and Jack the wily veteran battle it out. And at the same time I could see Mark lurking behind me, and thought he must be chuckling while he was saving his tires. I was trying to do the same thing and you know, it just worked where the battling up front just burned off Ben's tires a little bit. After Ben went wide in the hairpin I ducked underneath him and basically just kind of drove away at that point."

Of note, the Optima Batteries Best Start Award went to Clint Guthrie of Birmingham, Ala., in the No. 4 Medical Properties Trust Racing for Children's Porsche 911 for gaining three positions on the start. Aquilante earned the VP Racing Fuels Hard Charger Award for gaining six positions during the race.

Fastest lap of the race was that of Baldwin with a 1:32.128. With the fastest lap, Baldwin will start on pole for the Round 6 GTS race on Saturday.

Results are provisional until posted final. With the win, Wilson takes the lead in GTS Drivers' Championship points with 517 over Martin with 459.

Wilson walks away with Barber victory