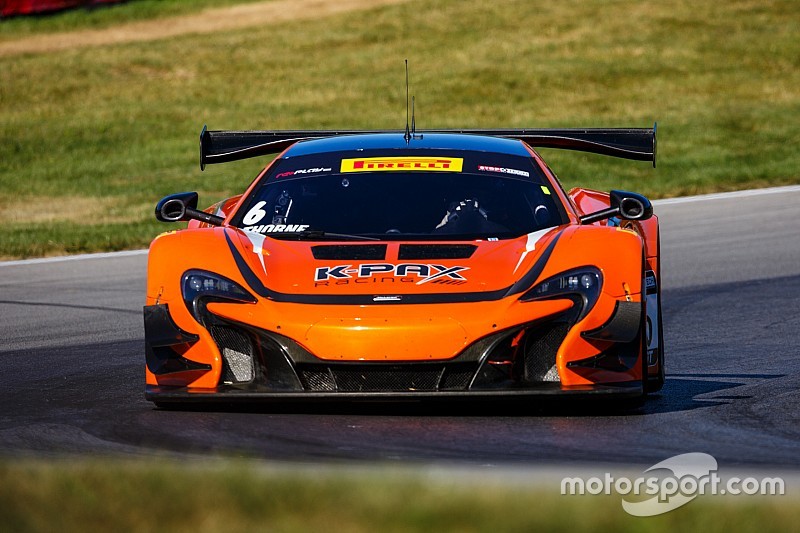 Jim Haughey: "We have won multiple championships in Pirelli World Challenge and it is a very unfortunate situation that we find ourselves in today."

It is with great disappointment that K-PAX Racing with Flying Lizard Motorsports has withdrawn the No. 6 and No. 9 McLaren 650S GT3s from competition in Rounds 16 and 17 of the Pirelli World Challenge GT Championship at Miller Motorsport Park.

"I am a big fan of this series and have been racing here since 2007," said K-PAX Racing Team Owner Jim Haughey. "We have won multiple championships in Pirelli World Challenge and it is a very unfortunate situation that we find ourselves in today."

K-PAX Racing won the final Round of the 2014 season at Miller Motorsport Park and the team had high hopes of returning to defend that hard-earned win with their new cars and new united team efforts with Flying Lizard Motorsports.

We take great pride in always putting technically compliant race cars on track and we are sorry to say we are forced to withdraw.

Located well above sea level in Tooele, Utah, Miller Motorsports Park sits at an elevation of over 4,400 feet. The higher elevation levels required the series officials to adjust the Balance of Performance (BOP) specifically for turbocharged cars competing this weekend, lowering each car's allowable boost to equalize the turbo cars against their naturally aspirated competitors. The BOP regulations put in place for this event demand that K-PAX Racing with Flying Lizard Motorsports run a maximum turbo boost level that is unachievable, regardless of engine tuning, with the homologated turbo and engine package the McLaren 650S GT3 was designed and built with.

"McLaren GT have been concerned about the boost correction methods used in Pirelli World Challenge," said Andrew Kirkaldy, Managing Director of McLaren GT. "This has been communicated to the series and we have asked for changes prior to Miller. When the Miller BOP was released, it was clear that we could not achieve the boost levels and we have been in almost daily contact with our technical staff and Pirelli World Challenge personnel to try and find a solution for K-PAX Racing with Flying Lizard Motorsports to race. Unfortunately despite our best efforts we could not find a solution that was acceptable to Pirelli World Challenge."

"These are FIA-homologated McLaren 650S GT3 race cars that can be used in competition all over the world including Europe, Asia and Australia, it is an amazing platform for a racing series" said Jim Haughey. "We take great pride in always putting technically compliant race cars on track and we are sorry to say we are forced to withdraw."

World Challenge will return to Lime Rock Park in 2016