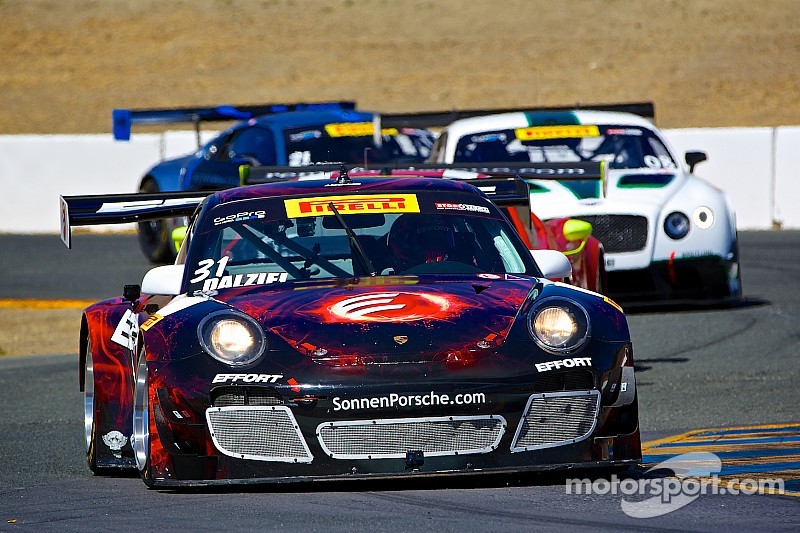 The series' 26th season kicks off this weekend, over 100 cars are entered for the Nissan Grand Prix of Texas.

Austin, TX – The Circuit of the Americas is the site of the 2015 season opener for the Pirelli World Challenge Championships. The series' 26th season kicks off at the 20-turn, 3.4 mile permanent road course, with action across all seven series divisions. Over 100 cars are entered for the Nissan Grand Prix of Texas.

A host of familiar names are joined by a wealth of talented newcomers, either in the form of new drivers, teams, manufacturers or cars. The continued integration of FIA GT3-spec cars in GT has provided continued manufacturer and team growth for the 2015 Pirelli World Challenge season.

Additionally, the GT Cup division makes its first appearance. New for 2015, the division is a spec class featuring the Porsche 911 GT3 Cup platform that will run as part of the overall GT Class races, with a separate victory circle presentation alongside that of the GT/GTA class winners.

The series last visited COTA in 2013 running the modified 2.3-mile National Circuit course and the track proved to be the perfect site for some exciting races and this year's rounds should be no different with the move to the full track. The GT, and TCA class champions of 2014 are in the field, and they begin their title defense this weekend, while drivers in GTA, GTS, GT Cup, TC, and TCB look to get off to a good start in their pursuit of their respective class championships.

Johnny O'Connell repeated as the Pirelli World Challenge 2014 GT champion after a dramatic victory weekend in last year's season finale at Miller Motorsports Park. He'll begin the quest for his fourth title in a row at a track where he won the Round 1 race to open up the 2013 season. A wrinkle for O'Connell, of Flowery Branch, GA., is that he returns to defend his championship in the new No. 3 Cadillac Racing Cadillac ATS-V.R.

Mike Skeen, of Charlotte, NC, will lead CRP Racing's effort in the No. 2 Hawk Performance Audi R8 ultra. Skeen pushed O'Connell hard in the battle for the GT Championship last year ultimately finishing second overall with three wins on the season (Rounds 7 and 8 at Road America, and Round 13 at Sonoma).

EFFORT Racing returns to challenge for the GT title with standout racer Ryan Dalziel of Windermere, FL., piloting the No. 31 Porsche 911 GT3R. Dalziel won back-to-back Round 11 and 12 races at Mid-Ohio last year after joining the team at the mid-point of the 2014 season.

K-PAX Racing returns with two McLaren 650S GT3s with Kevin Estre, of Locmau, Austria in the No. 9 machine and Robert Thorne, of Littleton, CO, in the No. 6 car. The team debuted the McLaren 12C GT3 in the series in 2014 and after a hard luck season Thorne won the final race at Miller. Now partnered with Flying Lizard Motorsports the team looks to continue that momentum into 2015.

The most successful driver in series history, seven-time Drivers' Champion Peter Cunningham, returns in the Acura TLX-GT prepared by his RealTime Racing operation. The Milwaukee native, who will drive the No. 42 RealTime/Acura Motorsports/HPD Acura TLX-GT, started three races in 2014 to develop the all new and only all-wheel drive platform in the series. Cunningham owns almost every statistical record in the series and looks to add to it in 2015. Ryan Eversley, of Atlanta, GA, joins the team to run the second Acura TLX-GT and will pilot the No. 43 RealTime/Acura Motorsports/HPD car.

One of the biggest pieces of off-season news came from Nissan Motorsports and the announcement of its partnership with Always Evolving (AE) to campaign two GT Academy-NISMO Nissan GT-R GT3 racing cars in Pirelli World Challenge. Australian open wheel and GT star James Davison will pilot the No. 33 AE/ReplayXD/NISSAN NISMO GT-R GT3.

Stacked deck of 23 entries to start the class' sophomore season

The GTA classification is designed for talented gentlemen drivers who do not make their primary living from racing cars, but as sportsmen, love the sport and have a passion for driving.

Dan Knox, of Pilot Point, TX, had a successful GTA rookie season in the series last year finishing second in the Drivers' Championship. He will pilot the No. 80 ACS Manufacturing/Lone Star Racing Dodge Viper GT3R. Last season Knox recorded a win in Round 5 at Detroit and he followed that up with a third in Round 6 at Detroit, and a second in Round 10 at Toronto.

Also adding his name to the 'vying for the championship in class list' will be Tim Pappas, of Boston, MA, in the No. 54 Black River Caviar Black Swan Racing Mercedes-Benz AMG SLS GT3. Pappas won GTA races last year at Road America and Miller Motorsports Park.

Sofronas' GMG team has one car entered in GTA, with Alex Welch of Englewood, CO piloting the No. 76 Audi R8 LMS ultra.

Turner Motorsport will field two BMW E89 Z4 GT3 in GTA at COTA. Bret Curtis, of Austin, TX, will be in the No. 32 Spectra Resources/United Steel Supply Turner Motorsport BMW E89 Z4 GT3. Curtis made seven starts in 2014. Bill Ziegler of Ponte Verda, FL will drive the No. 95 Swisher Racing machine. Ziegler's best finish in 2014 was a second at Road America.

Series veteran Jeff Courtney will bring another Audi to the GTA mix. Courtney, of Milwaukee, WI., returns to drive the No. 99 JCR Motorsports Kenda/RecStuff.com Audi R8 Ultra. Courtney started 12 GTA races and recorded a third in Round 8 at Road America.

New for the 2015 season is the GT Cup class presented by MOMO that will feature drivers piloting the Porsche 911 GT3 Cup. Ten drivers are entered in class and all are looking to put their names in the history book as the first winners in the newly formed class.

One driver to watch is up-and-coming hot shoe Alec Udell of The Woodlands, TX. Udell will pilot the No. 17 GMG Porsche 911 GT3 Cup. Udell moves up from the GTS class where he finished 9th overall last year and has shown steady growth over the last five years with 48 starts in the series.

Competition in the GTS class the last couple of seasons has been fierce with any of six or seven different drivers and manufacturers having a shot to win a GTS race. With a list of highly talented drivers in the class expect that number to stay that high, if not grow, in 2015. With defending and three-time Drivers' Champion Lawson Aschenbach not returning to the series, the two drivers Aschenbach narrowly beat out in 2013 and 2014, Jack Baldwin and Mark Wilkins, are back and eager to vie for top spot.

Wilkins, of Toronto, ON, will again race the No. 38 Kinetic Motorsports Kia Optima. Wilkins won at Barber, and Toronto and finished third overall in the GTS Drivers' Championship. Wilkins' new teammate for 2015 is Ben Clucas, of Northhampton London. He will pilot the No. 36 Kinetic Motorsports / Kia Racing Kia Optima. Wilkins and Clucas will look to put Kia back on top as the GTS Manufacturers' Champion after claiming the award in 2014 – the first series manufacturers' championship for the brand.

With no less that 134 starts in the Pirelli World Challenge Tony Gaples in his Blackdog Speedshop Chevrolet Camaro returns to the GTS category for 2015. Teaming up with Gaples is 2012 Touring Car Drivers' Champion Michael Cooper in the No. 10 Blackdog Speed Shop Chevrolet Z28. Last year, Cooper started both Miller Rounds 15 and 16 finishing fourth in Round 16.

TRG-AMR brings two Aston Martin Vantage GT4's to the GTS battle with Derek DeBoer and Kris Wilson behind the wheels. Deboer, of Ashland, OR, will pilot the No. 09 BlackRiderRacing/Lex Tempus/BRM Chronographes car, while Wilson, of Monument, CO will pilot the 07 car.

Rounding out the GTS field are Vesko Kozarov and Lou Gigliotti. Kozarov, of Salt Lake City, UT will pilot the No. 23 Skullcandy Team Nissan Nissan 370Z and Gigliotti, doing the double competing in both GT and GTS. In GTS he'll be behind the wheel of the No. 28 LG Motorsports Aston Martin Vantage GT4.

Young upstarts set to battle with a former class champion

Fifteen-year-old Nathan Stacy from Owesso, OK moves up to TC from TCB where he finished second overall in class in 2014. Stacy will be piloting a proven platform in the series – the Volvo C30. The No. 14 3R Racing/Stacy Racing Volvo C30 is a series winner from a couple of seasons ago, and will be supported by 3R Racing – a team with a number of series championships. Sure to challenge Stacy is Andrew Aquilante, of Chester Springs, PA, (doing double duty in GTS and TC) in the No. 32 Calvert Dynamics Phoenix American Motorsports Ford Mustang V6 and Adam Poland, of Mount Vernon, Texas, in the No. 33 Edge Addicts/Texas Track Works Eastex Motorsports Mazda MX-5. Aquilante returns to the series after a number of years of sports car racing in another North American series. Poland won races at Road America and Miller in 2014 and finished third overall in the TC class championship.

Another driver sure to make some noise this coming weekend is Ernie Francis Jr. of Davie, FL. Francis Jr. who moves up to TC in the No. 98 Breathless Performance/Time4Learning Breathless Racing Mazda MX5 after competing in TCA in 2014. Francis Jr. has had huge success at COTA winning the 2013 TCB Rounds 1, 2 and 3 in dramatic fashion going three-for-three in his first career starts in the series.

Up-and-coming driver Jason Cherry, from Gambrills, MD moves to TC after competing in TCA in 2014. He'll be driving the No. 13 Skullcandy Team Nissan Nissan Altima.

Defending Class champion Jason Wolfe of Mount Vernon, OH, returns in the No. 36 Wolfe Trucking Kinetic Motorsports Kia Forte Koup. Wolfe had an impressive 2014 recording five wins enroute to the championship. His efforts secured Kia the 2014 TCA Manufacturers' Championship. Teaming with Wolfe is Canadian Samantha Tan, of Gormley, ON in the No. 38 Kinetic Motorsports Kia Forte Koup. Tan makes her series debut in 2015.

Also competing in TCA at COTA are Felipe Merjech, of Bejota, Columbia and Juan Carlos Casadiego of Bogata, Columbia, in the No. 5 NDP Motorsports Honda Civic; Robby Foley, of Randolph, NJ, in the No. 23 Techsportracing.com Tech Sport Racing Mazda RX8; Kris Wright, of Pittsburgh, PA, in the No. 34 Kinetic Motorsports Kia Forte Koup; Patrick Seguin, of Ottawa, ON, in the No. 49 Let's Hug It Out Branden Peterson Racing Honda Civic Si; former GT driver Tony Rivera, of Vista, CA, in the No. 86 Brass Monkey Racing Scion FR-S; and Mike Dillard, of Austin, TX, in the No. 08 MX3 Homes/Bubba Burger/Philantropic Properties GRID 1 Motorsports Mazda RX8.

16 Drivers vie for wins at COTA

Touring Car B-Spec, for up-and-coming drivers, is the most cost-effective class category of the series. A dynamic championship battle came down to the final race of 2014 and 2015 should be no different.

Pirelli World Challenge: Is it ready for prime time?