The RealTime Racing Acura NSX GT3 machines had been showing steady progress in their maiden season of Pirelli World Challenge competition, and signs of improvement got brighter and louder this weekend at Lime Rock Park.

The Acura squad had its best weekend of 2017 at the tricky little track nestled in the Berkshires, putting both cars in the top six in Friday’s opener and then finishing with a fifth- and a seventh-place run in Saturday’s finale. The results were the season’s strongest demonstration of the improvements made by RealTime Racing and Honda Performance Development through their first year with the new American-built supercar.

“A great weekend overall at Lime Rock. The hard work of RTR and HPD is clearly paying off, with both cars finishing well in both races,” said NSX GT3 Project Leader Lee Niffenegger of HPD. “Race 2 was especially promising, as the #43 car ran in the top three for a good part of the race and the #93 was the fastest car on the track towards the end, and ran down the race for fourth. Unfortunately, at Lime Rock it is so tough to pass, and they just couldn't move both cars into the top five. Regardless, this weekend was a clear step forward.”

Ryan Eversley and Tom Dyer had their best qualifying session of the year in Friday’s opener, negotiating a wet track to claim the fourth spot on the starting grid. A deft move to avoid a crash at the start dropped their #43 back in the early part of the race, but Dyer found a way around the always-tough Ryan Dalziel late in the race to finish fifth.

“Passing on the outside is always a tricky proposition, but with the way Turns One and Two are laid out at Lime Rock Park, the grip is there,” Dyer explained. “I was able to pull up alongside [Dalziel] under braking and hold that position through Turns One and Two, and then had the preferred line going into Turn Three, where I took the spot.”

The team of Peter Kox and Mark Wilkins made up five positions in a tightly-packed field to place seventh on Friday, and as he did in Canada last week, Wilkins gained three spots in the #93 Acura on Saturday’s start, putting himself and teammate Peter Kox in position to move up and eventually challenge for a top-five result.

“In both races, we made significant moves forward and executed very well on our pit stops that helped us through the field,” reported Wilkins. “Our Race Two pit stop in the #93 was perfect, and Peter put in some stellar laps to get us into the battle for fourth near the end. Ryan and Tom executed all weekend long with a pair of top fives [finishes], and the RealTime Racing crew was spot on all weekend. Everything just seemed to click!”

The series’ new SprintX format that required mid-race driver changes had not been much of a problem for the Acura team so far this year, but last weekend, the pit-road changes provided the only hiccups for the #43 car.

Eversley got caught in a belt trying to hand off to Dyer on Friday, costing the team three spots. Saturday, when he took the third-place car from Dyer, the belt mechanism would not lock right away, dropping them from third to fifth.

Undeterred, Eversley took up the chase and climbed to the rear bumper of Vincent Abril’s Bentley, but the tight track allowed for very few passing opportunities, and the #43 settled for fifth, with Kox in the #93 following right behind.

“I'm very excited and happy to end the weekend with two top-five finishes in our #43 RealTime Racing Acura NSX,” Eversley said. “The team has come a long way with our brand new car, and I'm very thankful for the effort from everyone involved to help us get here. Hopefully, we can continue with our strong pace towards our home race at Road America, which is next up on the schedule.”

The team has good reason to look forward to Road America as it dominated the PWC GT weekend there last year, with Eversley storming to a pair of wins in the Acura TLX. The Road America race, which takes place June 24-25, is a return to the single-driver format and will serve as Rounds 4 and 5 of the PWC GT championship. 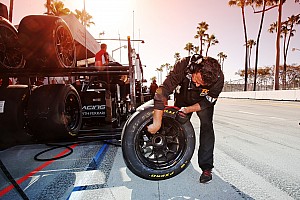