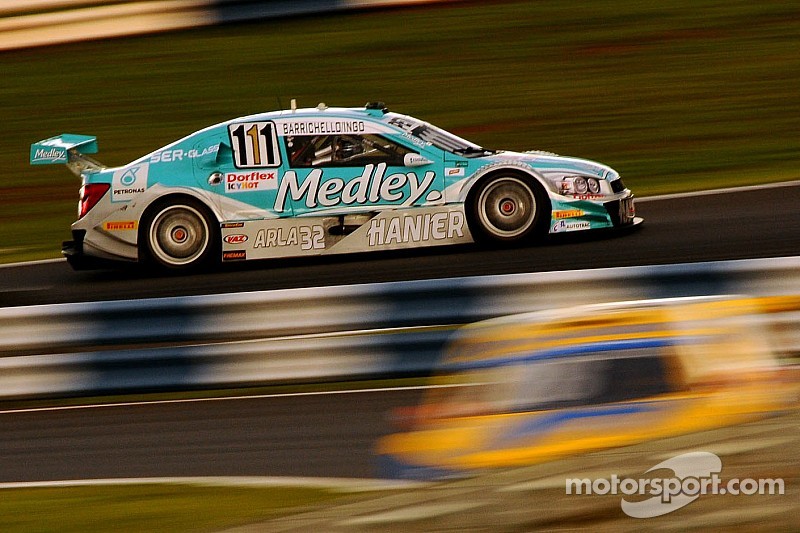 Thiago Camilo and Lucas Di Grassi fastest in the wet.

The circuit of Goiânia is cutting no slack for the drivers in the Race of the Duos in Brazilian Stock Car. Once more, the dry/wet track made it difficult for the whole field, since half drove in good conditions and the other half met a wet track with the rain. And in the final session before qualifying, the times could be split in two groups.

In both conditions the croud in Goiânia could see high-skilled drivers fly past the main straight. The competition is wide open, and qualifying can be a bit of a lottery in the afternoon. In the dry 14 drivers were in the same second, with Rubens Barrichello/Ingo Hoffmann leading the pace; in the wet, again one second splitting other 14 cars, with duo Thiago Camilo/Lucas di Grassi being the fastest during the rain period.

It’s bad for everyone, even the regular drivers that never drove in the wet here.

The crazy weather, though, isn’t pleasing the drivers. "I drove half and half. This morning was the first time I run really in the wet, because yesterday the track was damp, but drying. It’s not the easiest way to learn the car and the circuit, but it’s the same for most people. Others have more experience with this car, and I think it is going to be quite hard, because I had about ten laps in the dry, and I’ll try my best", says Nicolas Prost, partner of Julio Campos at Prati-donaduzzi.

His teammate Bruno Senna has the same opinion. "It’s bad for everyone, even the regular drivers that never drove in the wet here. It’s not easy and it cut us some learning time, because I did few laps in the dry, but it is the same for everybody".

Owner of the record with 12 Stock Car titles, Ingo Hoffmann is back in the wheel of a Stock Car for the first time in six years, courtesy of his longtime friend and reigning champion Rubens Barrichello. "It’s bad, because I hadn’t run in the extremes: totally wet or totally dry - I only got a damp track or drying", he told.

Lucas di Grassi drove for most of the session, where the choice of who was going to be in the car was free. "I’m comfortable and everything looks fine. Now we need a little luck to see if the track is going to dry or if it is going to be totally wet. For qualifying this mixed condition isn’t fair, because one can get a good lap in a dry surface, and if it starts to rain, your qualifying will be ruined", the Audi driver explains.

Italian ace Tonio Liuzzi isn’t caring enough for the weather conditions. Felipe Lapenna’s partner makes his debut in Stock Car racing in Brazil and says he’s really enjoying the experience. "I really like the series. I enjoy driving this car. They are big beasts, they are not easy, but it is fun. The track is good, but finding a good balance is a tough job, but the team are working in the right direction. The championship is really high-leveled because there’s a big field with big names, so it’s not easy to be competitive. You have to work really hard, and that’s why I’m happy to be here.

Co-drivers getting along with Stock Cars in Brazil