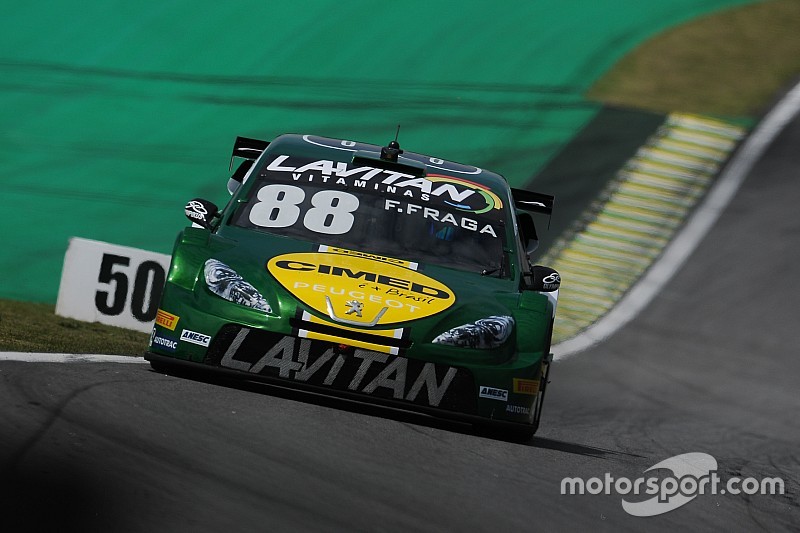 The 21-year old only needs a 12th place to clinch the championship; Barrichello starts second aware of the difficult mission he faces this Sunday

The last qualifying session of the Brazilian V8 Stock Car season was full of suspense. At Interlagos, known as Brazil’s motorsport temple, series leader Felipe Fraga registered his fourth season pole position - his first in São Paulo. Even with a 12th place being enough in the race to clinch the title, the Cimed Racing driver hopes to have put a psychological pressure on his rival Rubens Barrichello, who starts second tomorrow.

"I think I put some of this pressure on him, but I recognize it is almost impossible to mess with his mind due to his huge experience - he had been through much more tense moments than this one. Anyway, I am calm with myself and I won’t get in his way to the victory. My focus is on the title", says Fraga, who lapped the 4.309-km Grand Prix circuit in 1min38s939, only 11 thousandths of a second faster than Rubens.

The Medley-Full Time racer is aware of the difficulty of his mission, since the F1 start record-holder is 36 points behind and has to finish the race 11 positions ahead of his opponent. "Felipe has been driving in an incredible high-level standard, with an excellent car, so it is not a surprise, given that he is one of the best Brazilian drivers of this new generation. I am happy with this final moments of the season, because I was only 11 thousandths of a second behind his lap - which is nothing. We will need some luck; anyway, I really want to win this final race, I will push as hard as I can to do so, and then we just wait for what faith brings afterwards", he concluded.

Valdeno Brito doest not have any mathematical chance to fight for the title, but the third-placed driver promises to fight for victory on his farewell of TMG Racing. "I want to close the season on a high. The team deserves it", says Brito, who will drive for Carlos Alves’ Eisenbahn Racing Team in 2017.

Diego Nunes, Daniel Serra, Allam Khodair, Max Wilson, Thiago Camilo, Ricardo Maurício and Marcos Gomes close the grid top-10. The final race of the season is 40 minutes plus one lap long, with no mandatory pit stops and eight ‘push-to-pass’ each driver. The race starts at 10:10 am local time, broadcast live by Globo TV in Brazil.