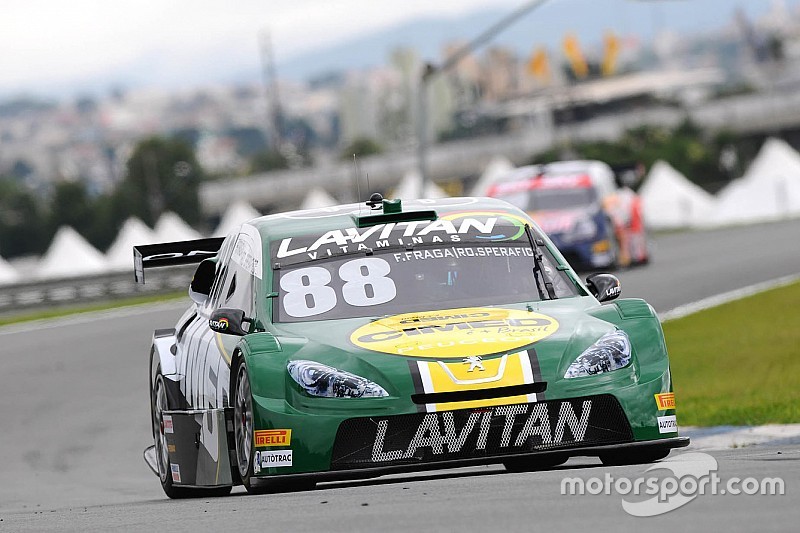 Reigning Champion relied on the experience of his co-driver to take the lead after the pit stop and cruised to the victory. Khodair/da Costa, Mauricio/Salas completed the podium.

Last year in Goiânia the All Star Race podium had Ricardo Maurício, Marcos Gomes and Allam Khodair with their guest drivers. This Sunday afternoon, the trio once again stepped on the podium - although in reverse order and with different guests (the only exception was Antonio Felix da Costa, again with Allam Khodair).

The All Star Race opened the 2016 season of Brazilian V8 Stock Cars with the reigning champion on the top of the podium. Marcos Gomes relied on the experience of Antonio Pizzonia and his bet worked. Even having started fifth, Gomes went up to second in his stint and after Pizzonia stepped in after the pit stop, he overtook Eurofarma-RC’s Guilherme Salas. Ricardo Maurício’s guest had some issues with rear visibility - he had no right-side mirror -, and Felix da Costa, in a brilliant move, took second place.

Other duos were among the protagonists, but they did not have a positive closure. Rubens Barrichello and Augusto Farfus, all the time in the top-4 spots, retired after Farfus had a drive-through penalty with three laps to go after hitting Lucas di Grassi’s rear. On the other hand, Átila Abreu started at the back of the grid, moved up and Nelson Piquet Jr finished the job by seeing the chequered flag in P6, one position behind Laurens Vanthoor, Ricardo Zonta’s guest.

"Pizzonia did an amazing job. He overtook the leader and managed tyre consumption. It is an excellent result for the team and important points for the championship", said Marcos Gomes. "I only have to thank Marcos’ invitation and the team’s trust on me. Everything worked well and I am glad I could help in great fashion", said Pizzonia.

The All Star Race was the official farewell of the Autódromo Internacional de Curitiba. The venue was sold and will be officially closed in three months, holding a Stock Car race for the 56th and last time in its history.

Second round of the championship takes place at the Velopark circuit on April 10th with the first double-header of the season.

Brazilian V8 Stock Cars: Mauricio and Salas on pole for the season-opener