Rain in Goiânia: The perfect stage to good races and the wins of Rubens Barrichello and Átila Abreu 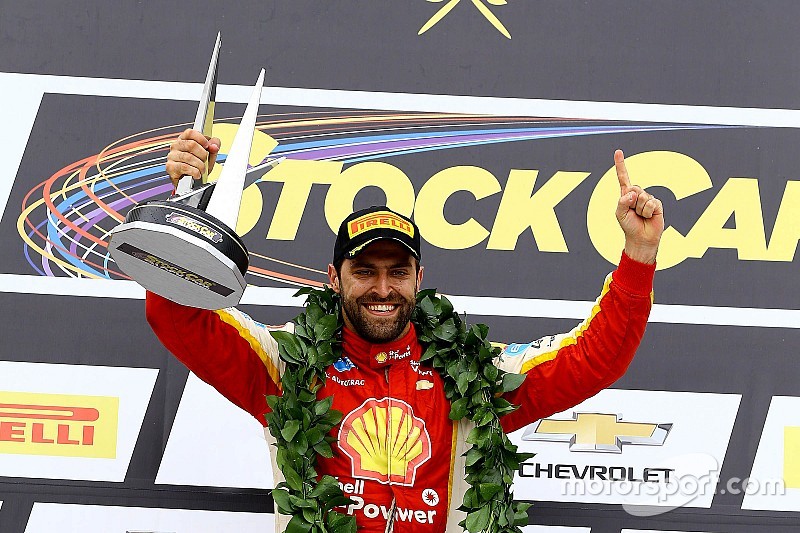 Felipe Fraga stays ahead in the championship, but his advantage dropped from 44 points to 29 over Barrichello

Goiânia (GO)  - The tenth round of Brazilian V8 Stock Cars has brought an ingredient the series have not seen since April 2015: racing on a wet track. The usually hot Goiânia spiced things up a little, putting the drivers to prove themselves on those conditions. The winners this Sunday afternoon were Rubens Barrichello, from the Medley Full Time team, and Átila Abreu, who scored his first win for the Shell Racing squad.

The championship leaders raced against each other on the first heat. Pole sitter Rubens Barrichello had to stay ahead of Felipe Fraga to shorten his points distance from the leader. Fraga tried to overtake the 44-year old driver, but Barrichello managed to keep his front to win for the third time this season - although his other two wins were on the second heats.

They continued racing each other on race two, and Rubens got a solid fifth place without refueling - Fraga, on the other hand, stopped on the final lap out of fuel when he was second.

"Now it is all about calculations", said Rubens. "To be P1 and P5 at the same weekend is a great result. My team told me to win the first one saving fuel - like it was easy", he laughed. This saving, though, was the key for him to score the record of 40 points, while Fraga only took 25 in Goiânia. In the standings, Rubens reduced the gap from 44 to 29 points chasing the lead.

The rain continued when the green flag waved. Foresti, starting from pole, got off the track in turn one, opening the path to Átila Abreu. The Shell Racing driver opened a three-second gap over Nestor Girolami, who had Red Bull’s Daniel Serra breathing down his neck for almost all the race distance.

A good battle was set up from P3 to P10 involving Serra, Fraga, Nunes, Brito, Campos, Barrichello, Gomes and Camilo - the only one who pitted for fuel on race one among the top-10. With no need to pit again, his goal was to push while the others had to save.

The final two laps were pure agony for the frontrunners. Girolami, in second, stopped out of fuel; Fraga, the new second placed driver, got out of the race as well on the final lap - the same happened to Valdeno Brito and others.

"It was highly dramatic, because after race one we knew we need four or five more liters of gasoline to finish race two. A safety car could make things easier, but it did not come. I managed a good saving pace, but when I saw Girolami pulling out of the track with no fuel, my heart stopped", he said.

"My dashboard pointed there was no fuel whatsoever and I drove praying to God to avoid that to happen to me. It worked. I am really happy, because it has been a tough season for us. I am thankful to the whole team, who did a fantastic job and never stopped believing in us", Abreu finished. Galid Osman, Marcos Gomes, Vitor Genz, Guga Lima and newcomer Guilherme Salas were the top-10 finishers.

Brazilian V8 Stock Cars heads to its penultimate round at the Minas Gerais state brand-new race track, the ‘Circuito dos Cristais’, in the city of Curvelo, on November 20th.