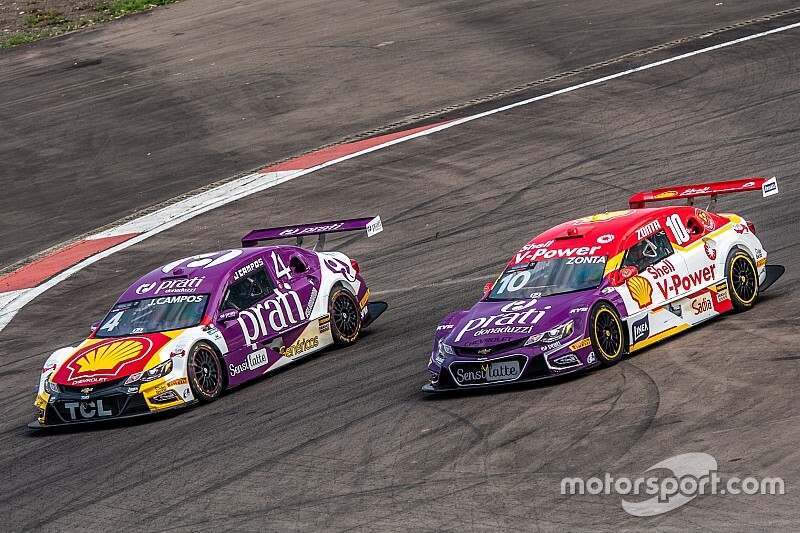 Two sponsors in the Brazilian Stock Car Series allowed their cars to switch liveries at Velopark, in Nova Santa Rita over the weekend to promote a national organ donation campaign.

The unusual sight of cars from different teams having their hoods swapped occurred between Julio Campos, from the Prati-Donaduzzi team, and Ricardo Zonta, from Shell V-Power. The move happened just before the start of the first race of the day.

Former Formula 1 driver Zonta ran in the colors of the Prati-Donaduzzi, and Campos wore the Shell hood, both entirely out of line with their standard livery. The surprise was part of an action planned for more than six months by both brands, intended to increase awareness on the importance of organ donation. On 27 September, Brazil celebrates a day of ‘National Organ Donation’.

“There are thousands of Brazilians waiting for a donation,” said Campos. “Lives that can be saved by a simple act of love for others, declaring to their families the intention of being an organ donor. When the Prati-Donaduzzi approached me to talk about this action, I immediately engaged in raising awareness of the cause.”

Zonta added: “It is incredible to use the visibility provided by motor racing to call attention to a subject as relevant as organ transplantation. I am proud to be part of this project and to help give relevance to such an important agenda, capable of saving lives.”

During the switch – that was labelled ‘Transplanted Cars’ – both Campos and Zonta declared themselves to be organ donors. In Brazil, for someone to become a donor, it is enough to inform the family. A single person willing to contribute to reducing the transplant line can save more than twenty lives.

“Prati-Donaduzzi's investments in sports are aligned with our mission of providing health and well-being, and when we talk about a far-reaching platform like Stock [Car], it gives us the opportunity to draw attention to important causes that can save lives, such as organ donation,” said Lucas Angnes, marketing manager at Prati-Donaduzzi.

Vicente Sfeir, Manager of Motorsport & Sponsorships at Brazil’s Shell joint venture Raízen, added: “Shell is the largest sponsor of motorsport in Brazil and one of the biggest on the planet. We have always been associated with performance, technology, and safety. It is very important to impact the public with messages that transcend the sports universe, and this is exactly what we sought in this joint activation with the Prati-Donaduzzi.”