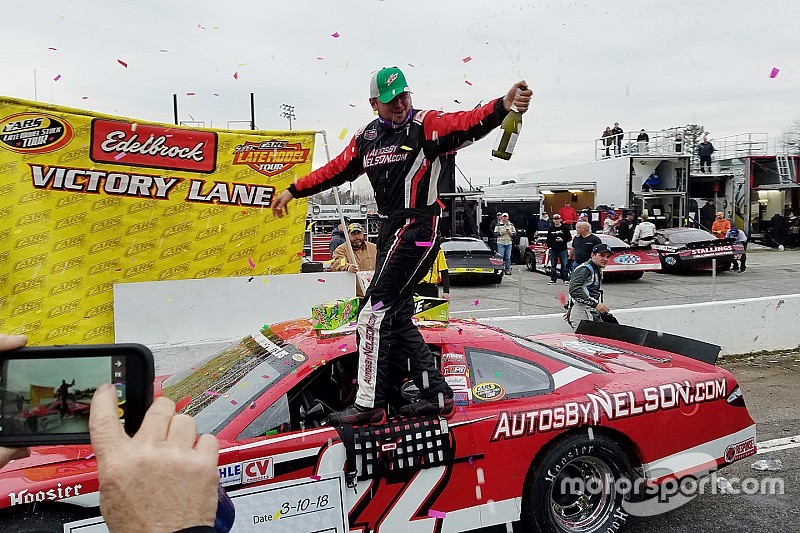 McCarty is no stranger to winning big Late Model races after taking the prestigious Hampton Heat 200 at Langley Speedway last year. Now, he can add another big win to his resume.

McCarty, who joined teammate Timothy Peters for the  Mountain Dew Do the Dew 150 $10,000-to-win race, started sixth and remained in the top-five throughout the race.

The race was divided into four segments and McCarty led the final three on his way to his first tour win.

“In the second stage the car really came to life,” said McCarty who was able to drive away on the final restart of the race from defending NASCAR Whelen All-American Series champion Lee Pulliam. Pulliam experienced battery issues late in the race.

“The way I look at it, I’m just racing another car (when asked about starting beside Pulliam),” said McCarty. “I can’t thank my guys who gave me a great car today and we were able to pull away on every restart and the car was really good today.”

Berry started from the pole and led the first 10 laps of the race before Peters was able to make the pass and take the point and win Segment 1. During the caution Peters was forced to make a pit stop as he had problems with the left rear axle on his car.

“The axle didn’t break, but the caps came loose and I’ll take the blame for that for lack of preparation on my part,” said Peters who rebounded to finish seventh.

Berry finished fifth in the first segment and was running second in the second segment when he experienced mechanical issues and slowed on the track to bring out the caution flag and lose a lap.

The series will move on to Myrtle Beach Speedway for the second of 12 races on the 2018 schedule.