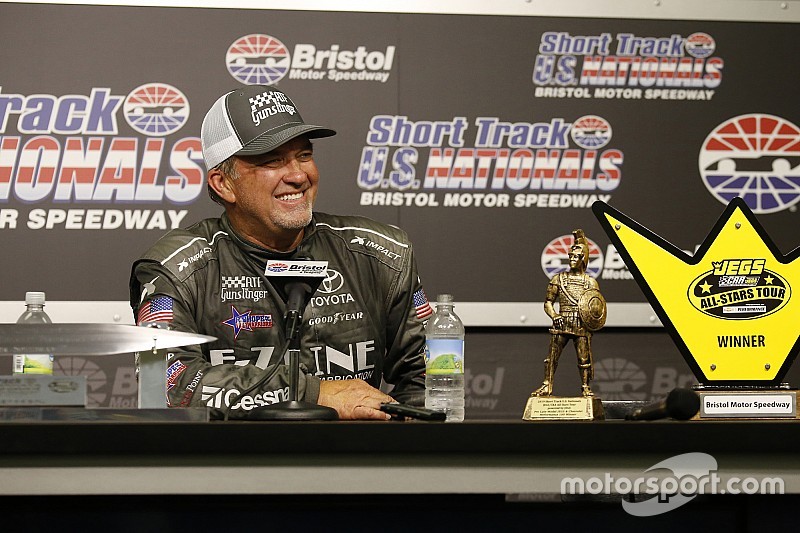 Mike Skinner returned to Victory Lane at one of NASCAR’s most iconic tracks.

Skinner had won the pole for last year’s event and jumped out to a big lead only to see his race cut short after getting involved in a wreck with a lapped car.

This weekend, Skinner again won the pole but nearly got collected in an early race crash after the field was inverted and ended up with minor damage to his brakes, which his team repaired.

He took the lead on Lap 42 of the 100-lap event after passing reigning JEGS Pro Late Model Series champion Jack Dossey III and held on for the victory, his first at the track since his NASCAR Truck Series win there in 2005.

“I ran through the debris after that crash a few laps in and it tore the brake master cylinder off it,” Skinner, 61, said. “I just told the boys don’t panic and we’ll get it fixed.

“We were blessed with a couple of cautions right after that and they were able to get the thing back on there and I didn’t even want to look at it. I knew we had a fast hot rod and we’d be OK if we could get it back on the track.

“If Bristol Motor Speedway gave me a bottle of soda for winning a race I’d put it in my trophy case. That’s how much it means to me to win a race here.”

Winners in the other of Saturday’s finals were Stephen Nasse in Super Late Models, Chuck Barnes Jr. in Street Stock and Tom Gosser in Compacts.