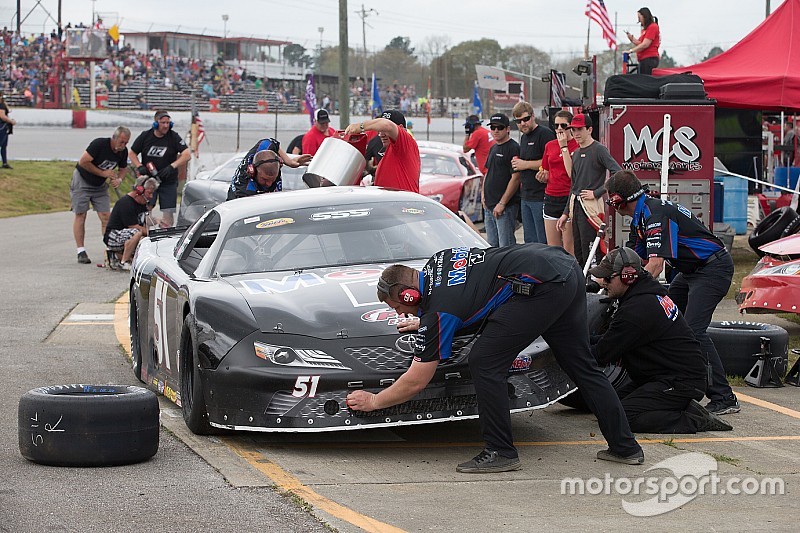 Driving the No. 51 Toyota Camry FRL Express/Mobil 1/Toyota prepared by Kyle Busch Motorsports, Lessard started the race in fifth place and set the pace during the 150-lap race held on the fast 3/8 mile asphalt oval in Orange County, North Carolina.

Several accidents and cautions flags marred the race. Lessard remained calm and managed to stay in front of the pack until he made his sole pit stop with 60 laps to go for a tire change and a quick refuel.

After a mandatory caution flag called the “competition flag” came out with 20 laps remaining, Lessard continued to gain ground on the leader and was in third place.

After the last caution flag of the night (caused by a driver going off track), Lessard fell victim of over aggressive drivers and finished fourth in this action-packed race won by Bubba Pollard.

“It is disappointing that we did not win the race, mainly because we were so close to the first place,” Lessard explained after the race. “We still proved that we had an excellent car and that the pace was there. I am very happy with my performance, and that of the team and the car. We are on a good path for a great season.”

Alex Fontana, Adrian Zaugg, Canada’s Mikaël Grenier planted the Jaguar in second place on the starting grid with a time of 1:48.319. After holding second place overall during the first stint the No. 54 Jaguar was eventually shuffled back to fifth, but made up ground and finished well clear of its nearest Silver Cup rival. In fact, it took the chequered flag just 3.3 seconds shy of a spot on the overall podium.

“We had a strategy issue during the full-course yellow, which lost us some positions,„ said Grenier. “This was unfortunate as the team did a great job throughout the whole weekend. I had a good stint even if we did struggle in the traffic. The Jaguar can’t brake as late as the others and I didn’t want to take any risks.”

Canadian kart racer Thomas Nepveu endured a tough time at the CIK-FIA European Junior Championship held in Sarno, Italy. The driver of the BirelArt/TM Racing/Vega machine set the 23rd time out of the 24 participants in his qualifying practice session.

After the numerous qualifying heats, Nepveu ranked 57th out of the 82 drivers entered in the competition, and only the 34 best made it to the finale, ending the day of the young Canadian.