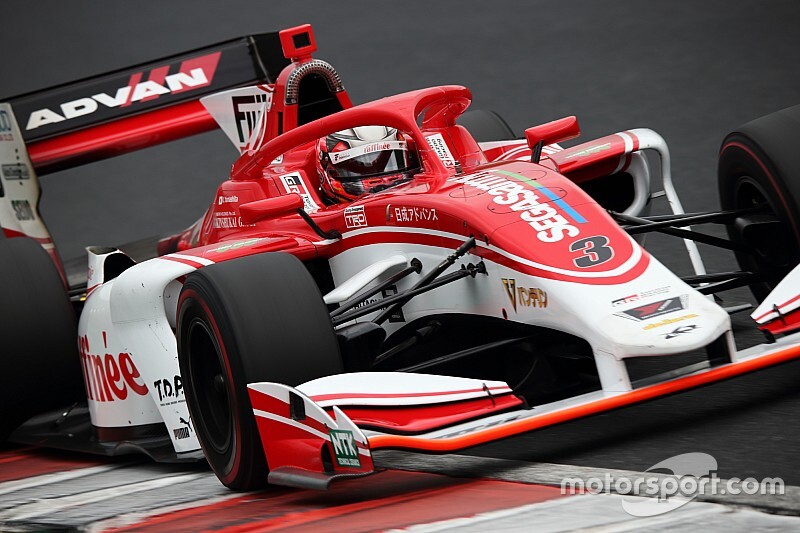 However, Fukuzumi spun on the entry to Attwood on lap 8 of what turned out to be a 66-lap race, bringing out the safety car and splitting the field strategy-wise.

Race leader Hirakawa stayed out on track along with a small batch of drivers, while the remainder of the field led by Yamashita pitted when the pit window opened on lap 11.

At the restart, Hirakawa again retained his lead, but was unable to pull a gap of more than two seconds at any point.

That brought TOM'S man Cassidy, also yet to pit, into contention later in the race, the Kiwi bringing down the deficit to less than a second by lap 45.

Hirakawa initially managed to contain the threat from his SUPER GT teammate, but Cassidy caught the back of the Japanese driver again on lap 56.

Two laps later, Cassidy dived down the inside of Hirakawa at the hairpin, making the move stick to take the lead on track.

However, at this point Cassidy’s gap to Yamashita was roughly 25 seconds, which proved to be insufficient when he finally stopped on lap 60.

After all leading cars had pitted, Yamashita, who has also been competing in the FIA World Endurance Championship's LMP2 class with Toyota backing, assumed the lead and went on to score Kondo’s first victory since Cassidy drove for the team in 2018.

TOM’S driver Kazuki Nakajima finished second to secure his best result of the season, while Harrison Newey finished third to clinch his first Super Formula podium since joining the series at the start of the year.

Alex Palou was the best of the Nakajima Racing runners in fourth, while Newey’s B-Max by Motopark teammate Lucas Auer was fifth.

Yamamoto unusually made two stops under the safety car to minimise the time spent on the slower medium tyre en route to seventh.

The defending champion benefitted from a clash between Cassidy and Kamui Kobayashi that pitched the former into a half-spin and left him outside of the points.

Cassidy had emerged ahead of Kobayashi after his pitstop and was chased down by the Japanese driver, who was on the faster soft tyre at this stage.

After several attempts, Kobayashi tried to use his superior grip to go around the outside of Cassidy, but the two made contact and Cassidy was left facing the wrong direction.

The incident dropped Cassidy to 10th, while Kobayashi - who initially carried on unscathed - reportedly spun on the final lap and didn’t take the chequered flag.

The result means Yamamoto heads to the Suzuka title decider one point clear of Cassidy, while Palou heads into the finale only four points adrift.

Hirakawa, who had led the majority of the race, had a relatively slow pitstop and ran off track on his outlap, finishing a disappointing 12th.

Yamamoto: 'I can't win the title with my current driving'