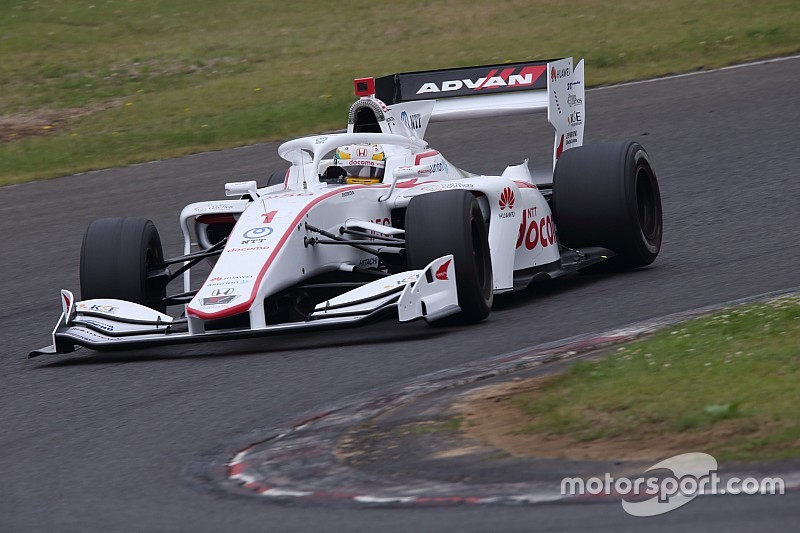 Naoki Yamamoto extended his championship lead in Super Formula with a lights-to-flag win at Sugo, as Red Bull junior Lucas Auer secured his first podium with a third-place finish.

Dandelion driver Yamamoto was locked in an indirect battle with Mugen’s Tomoki Nojiri for the lead, as the field split into diverging strategies for the 68-lap race.

A pack of drivers led by Yamamoto started on the soft tyres, with the aim of going longer in the first stint before switching to mediums. The other group - led by Nojiri - cleared their mandatory stops on the opening lap, putting them in clean air and on the faster soft tyre.

Initially, the race appeared to tilt towards Nojiri as he was lapping comfortably quicker than Yamamoto, who was also held up by backmarkers on the short 3.7 km circuit.

But Yamamoto slowly but steadily upped the pace, extending what was a 37-gap to a nearly 50-second advantage by the time he pitted on lap 52.

That allowed the reigning champion to return to the track still in the lead race of the race, 10 seconds clear of his rival Nojiri.

The late-stopping Auer also managed to jump Nojiri, but came under pressure from the Mugen driver soon after his pitstop.

Nojiri attempted a lunge heading into Turn 1, but clipped the inside kerb, pitching himself into a spin and getting beached into the gravel.

With Nojiri unable to escape from the run-off area on his own power, the safety car had to be deployed. Moments after the caution ended, reigning Japanese F3 champion Sho Tsuboi spun on his own at the SP corner, necessitating another safety car.

That left a three-lap dash to the flag, with Yamamoto easing to his second victory at Sugo in as many years.

Auer, however, got stuck behind the lapped cars of Dan Ticktum and Kazuya Oshima, allowing Kamui Kobayashi to sneak through and take second.

Third place, however, was still enough for the Red Bull junior to score his first podium in Super Formula - and the first for the new B-Max by Motopark partnership.

Behind, TOM’S driver Nick Cassidy held on to fourth by just 0.099s from Nakajima Racing’s Alex Palou, who took advantage of the first safety car intervention to make his pitstop.

Nirei Fukuzumi finished sixth in the second of the Dandelion Racing cars, ahead of Kondo’s Kenta Yamashita and Inging driver Hiroaki Ishiura, who claimed the final point in eighth.

Red Bull junior Ticktum and Formula 2 convert Artem Markelov finished a lap down in 14th and 15th respectively, just ahead of Oshima, the last of the classified finishers.

Update: Palou was handed a post race penalty, dropping him to 13th in the final classifications.

Auer has made "huge step" since Super Formula stint