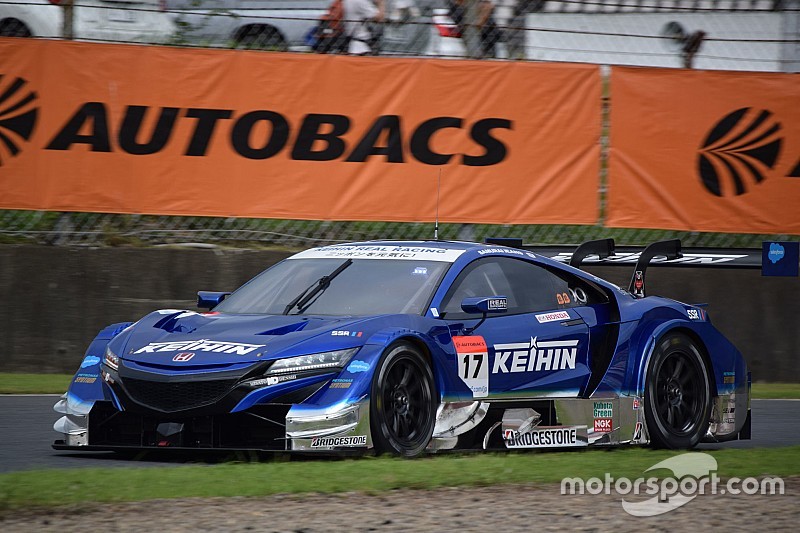 Koudai Tsukakoshi underlined the chart-topping pace shown by Real Racing in both practice and Q1, clocking a time of 1m33.262s in the #17 NSX-GT he shares with Bertrand Baguette.

That was enough to secure the outfit’s first pole position since last year’s Okayama season opener, and the first for Honda in 2019.

ARTA made it a one-two finish for Honda, although Tomoki Nojiri and Takuya Izawa ended up over seven tenths off the pace with a time of 1m33.967s.

The #36 TOM’S Lexus duo of Yuhi Sekiguchi and Kazuki Nakajima were fourth-fastest, ahead of the SARD Lexus of Heikki Kovalainen and Yuichi Nakayama.

The B-Max Nissan pairing of Kohei Hirate and Frederic Makowiecki were next up in sixth, while Nick Cassidy and Ryo Hirakawa, who sit second in the drivers’ standings, qualified seventh in the #37 TOM’S Lexus.

The Q2 field was propped up by Fuji 500km winners Hiroaki Ishiura and Yuji Tachkiawa, the Cerumo Lexus squad runners set to line up eighth on the grid.

The championship-leading LeMans Lexus of Kenta Yamashita and Kazuya Oshima qualified a distant 14th, saddled with ballast equivalent to 100kg - including a Stage 3 fuel flow restrictor.

Reigning champions Jenson Button and Naoki Yamamoto also missed out on a Q2 berth for the second consecutive race, the Kunimitsu Honda duo qualifying 1.4s off the pace in 12th.

Matsui lapped the Autopolis circuit in 1m44.423s in the #25 Toyota 86 MC, edging out the #52 Saitama Toyopet Toyota Mark X MC of Hiroki Yoshida and Shigekazu Wakisaka by less than a tenth of a second.

Racing Point still has the "lowest budget" in F1