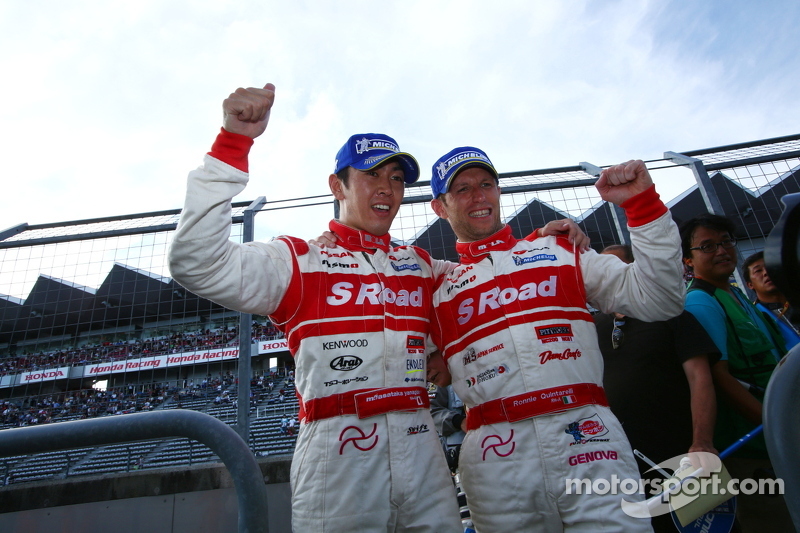 The SUPER GT IN KYUSHU 300km, Round 7 of the 2012 AUTOBACS SUPER GT, was held at the AUTOPOLIS Circuit (lap = 4.674 km x 65 laps) in Oita Pref. on Sept. 30. Amid difficult conditions with changes in the amount of rainfall, the reigning GT500 champions, the S Road REITO MOLA GT-R (Masataka Yanagida/Ronnie Quintarelli) won the GT500 race. This win clinches for them a second straight championship title with one round still remaining in the season.

The morning of race day was plagued with fog, but with the typhoon no longer a factor, the race started in a light drizzle exactly at 14:00. Soon after the start of the race the 2nd-position grid sitter, the MOTUL AUTECH GT-R (Satoshi Motoyama) managed to pass the pole-sitting WedsSport ADVAN SC430 (Andre Couto) and lead the race. The D'station ADVAN GT-R (Bjorn Wirdheim) soon joined the two lead machines to make it a three-way battle in the early going.

During the middle stages of the race, however, the EPSON HSV-010 (Ryo Michigami) that had started the race from virtually the tail end of the pack made a fearsome charge toward the front. Throughout the race the strength of the rain varied, causing the amount of water on the track to change constantly, but the Dunlop tires the EPSON HSV-010 was running on proved to be a perfect match for the conditions and enabled it to take the lead before the routine pit stop at mid-race. The EPSON team also gained time in the pit by choosing to forego a tire change. After this pit stop, the EPSON HSV-010 with Yuhki Nakayama now at the wheel entered the second half of the race with its lead intact.

But, the S Road REITO MOLA GT-R (Ronnie Quintarelli to Masataka Yanagida) that had opted for an early tire change was now turning out faster lap times and gradually catching the leading EPSON HSV-010. On the second to the last lap the S Road (Yanagida) was right on the tail of the EPSON (Nakayama). From this point the two machines staged a fierce battle, and on the final lap the S Road with its faster pace succeeded in passing the EPSON. Racing on to the finish, the S Road REITO MOLA GT-R claimed its second win of the season, following the victory in round five at Suzuka.

With this victory the GT500 defending champions Yanagida and Quintarelli of the S Road REITO MOLA GT-R team racked up enough points to put them 24 points ahead of 2nd-ranked Yuji Tachikawa and Kohei Hirate (ZENT CERUMO SC430). Since only 20 points can be earned in the final round, this clinched the season’s GT500 class drivers’ title for the S Road pair without waiting for the final round. It also clinched the team championship for the S Road REITO MOLA GT-R’s MOLA team.

The GT300 class race developed into a fierce contest between the 2nd-position grid starting triple a vantage GT3 (Hiroki Yoshimoto/Kazuki Hoshino) and the pole-starting S Road NDDP GT-R (Yuhi Sekiguchi/Katsumasa Chiyo), but while running in the lead late in the race the S Road NDDP GT-R had its left rear tire come off and gave up the victory to the triple a vantage GT3, its second win of the season.

This win brought Yoshimoto and Chiyo up to 2nd position in the drivers’ ranking. In the final round, they will be competing against the HANKOOK PORSCHE pair of Kageyama and Fujii, who kept their lead in the season ranking by finishing 3rd in this race, and the ENDLESS TAISAN 911 pair of Mineo and Yokomizo, who moved into 3rd place in the ranking by finishing 2nd in this race. (Spectators: 21,100)

Masataka Yanagida: “The team prepared a good car and Michelin prepared magnificent tires for us. So, all we drivers had to do was drive. I feel that today’s victory was won by the whole team. The qualifying didn’t go well and we had to start from back in the pack, but Ronnie [Quintarelli] worked hard to pass cars even when the chances looked slim. I could feel how he was trying to give me the best position possible for my stint. It turned out that I had a long stint (in terms of distance run) and to tell the truth I thought it would be rough, but I was able to keep pushing and get the win.”

Ronnie Quintarelli: “We didn’t know how the track conditions were going to change, so right up to the start we were thinking about the tire choice and whether to take a risk or go with the safest choice. We ended up choosing the later for the start, but it turned out to be very hard to pass the cars in front of me. But we had done a simulation and decided I would return to the pit after the minimum required distance for my stint. So, things went just according to plan. In the second half Yanagida-san did a great job for us.”

Hiroki Yoshimoto: “Up through round six we had been on the podium three times, but in the remaining we hadn’t scored any points. So, from the standpoint of winning the season title, we really needed to win today. In the first half of the race, Kazuki-san ran with a good flow, and although there was the accident of a fire breaking out during the pit stop, the team crew took care of it quickly and kept the time loss to a minimum. In my stint there were fewer wet spots on the track during the latter half, which mean more wear on the tires, but I managed to make it to the finish OK.”

Kazuki Hoshino: “This time we came to the circuit with a stronger feeling than ever that we had to win this race. An engineer came from Aston Martin’s home headquarters and we were able to win round five at Suzuka, which made me feel that things were going our way. I was surprised at how fast car No. 3 was in the rain, but with today’s conditions we felt the real race would come be decided in the second half. So, I thought we would be OK if I could just keep with the pace through the first half.”