Bertrand Baguette admits he and Real Racing Honda teammate Koudai Tsukakoshi got “lucky” twice on their way to victory in SUPER GT’s Fuji 500km round having spent much of the race struggling for pace.

The Belgian-Japanese duo got knocked out in Q1 for the second time in as many attempts this season, qualifying 11th among the 15 GT500 cars with a lap time of 1m27.717s.

Tsukakoshi took the wheel of the #17 Honda NSX-GT at the start but could make little progress in the first stint, slipping over 28 seconds behind the leaders by lap 30 of 110.

However, a full-course yellow was deployed shortly after Tsukakoshi dived into the pits at the end of lap 31, allowing teammate Baguette to jump into the lead once all the other teams had completed their own stops.

Later on in the third stint, Tsukakoshi slipped back to third after losing places to the #37 TOM’S Toyota of Sho Tsuboi as well as the #8 ARTA Honda of Tomoki Nojiri, only for both his rivals to hit trouble after yet another FCY.

While the 34-year-old faced intense pressure from Kenta Yamashita in the last dozen laps of the race, he managed to fend off the Rookie Racing Toyota driver to clinch Real Racing’s third win in the space of 12 months.

Speaking after the race, Baguette admitted that he considers Real Racing fortunate to have emerged victorious in SUPER GT’s blue riband event, especially after Tsukakoshi lost nearly half a minute in traffic in the first third of the race.

“It’s a totally unexpected one, so I’m really happy,” the 35-year-old told Motorsport.com. “It’s been a tough beginning of the season, we are not as fast as we wanted to be, and even today, the first two stints we were struggling.

“We were completely stuck behind the Dunlop Honda [Mugen car]. We pitted early and we got really lucky. I saw on the dash exiting the pits ‘FCY’ and it was the perfect timing for us.

"I thought we would gain positions, but I didn’t expect to be P1, but after six laps in my stint [team boss Katsutomo] Kaneishi-san said, ‘we are P1’. Then [towards the end of the race] we got lucky again because the #8 and #36 disappeared in front of us.

"We’ve still work to do to really fight at the front, but winning is a big boost for us. “

Baguette bolstered Real Racing’s chances of victory in the middle stint when he stretched out an advantage of nearly 17 seconds over the similar NSX-GT of the ARTA team.

However, his pace began to fade as his stint wore on and he was the first of the GT500 runners to pit on lap 68 to hand the car back to Tsukakoshi for the final part of the race.

Baguette feels his sudden drop in pace was likely down to the team’s choice of Bridgestone tyre, as a change of compound allowed Tsukakoshi to remain quick towards the end of his stint later in the race.

“It was the same tyre as we used in warm-up, and I had a really good feeling," he said. "I could do 1m29s-low with a full tank of fuel with no traffic, but I could never do that in the race, so I’ve no idea why we lost that pace.

“At the beginning of the stint I was consistently in 1m30s-low, and I was quite aggressive in traffic and I could pull a gap, but towards the end of the stint I had no pace in the tyre, I was doing 30-high, 31-low, which was too slow. That’s why we switched tyres for Koudai’s stint, and that was key." 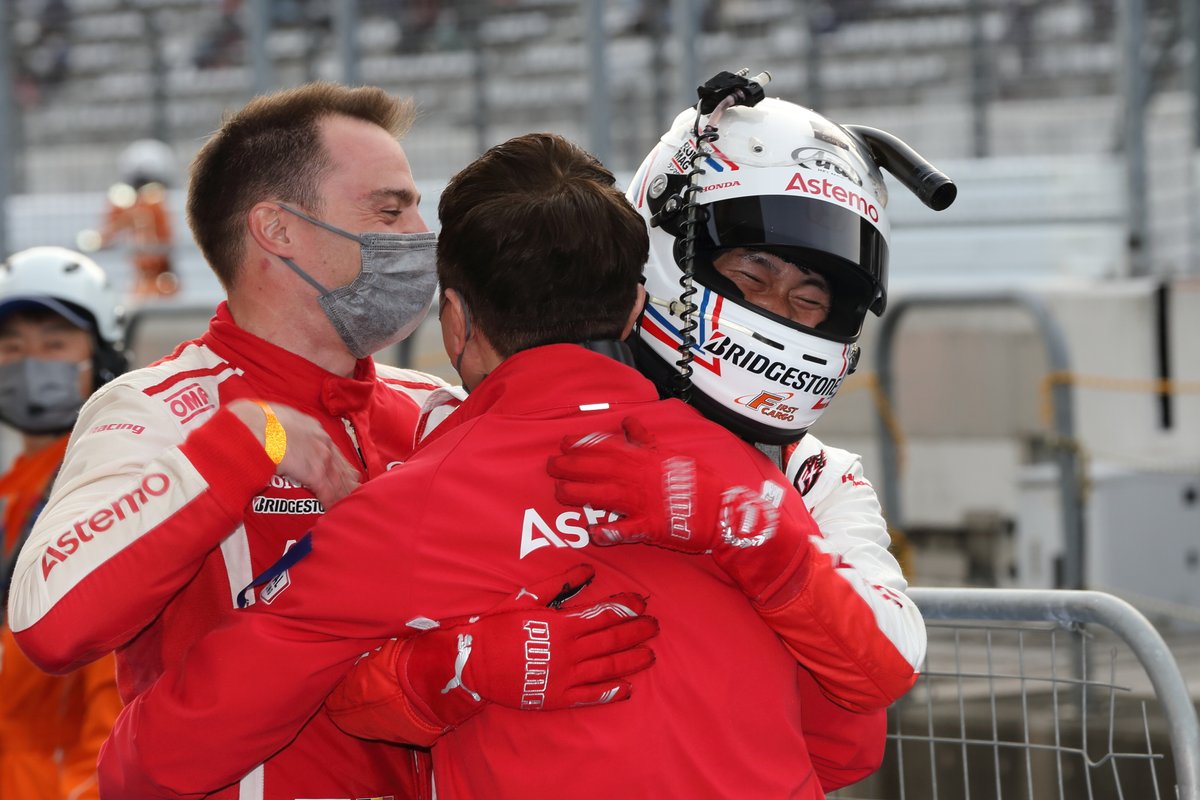 Baguette admitted it was “stressful” to watch Tsukakoshi defend from the Rookie Racing Toyota GR Supra that won the season opener at Okayama last month and feared at one point that he and the team would completely drop outside the podium positions.

But Tsukakoshi managed to withstand the pressure crossed the line just under a second clear of Yamashita, with the #37 TOM’S Toyota and the #1 Kunimitsu Honda finishing another second adrift in third and fourth respectively.