Big in Japan: Cyndie Allemann to race with Hitotsuyama Racing in the Super GT Series in 2012

Shizuoka, Japan, February 10, 2012 – The 2012 season was already getting busy for Cyndie Allemann, and it will be even more with a proposition that was as fast than unexpected of a racing program in the Super GT series. In a mere two weeks, the motor racing star from Switzerland has seen her life changed in a major way: after the decision of the i1 Super Series to rescheduled its launch to 2013, she received an offer from the Hitotsuyama Racing team to participate in the prestigious Super GT championship in Japan. She will partner with Akihiro Tsuzuki on the first Audi R8 LMS of the team, in the GT300 class. 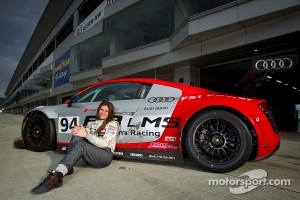 “A Japan-based racing program is totally unexpected for me. It will be an awesome experience, and at a personal level, an incredible occasion to become a better person, to discover a new country and a new culture. In addition, I met the whole team and they are an amazing group of people, with very cool personalities. They really want to work with me to win races together.”

First invited to take part of a test on February 8 on the technical Fuji Speedway, Cyndie really made an impression on the team with her personality, her professional approach and her technical knowledge. But above all, she surprised the team owners and engineers with her immediate on-track speed: in cold weather conditions and with a brand new car for her, Cyndie took only 10 laps to be in the fast reference times. Thanks to her performance, she received a contract on the spot by the team owners.

I met the whole team and they are an amazing group of people, with very cool personalities. They really want to work with me to win races together.

“The test went pretty well: it was a first experience for me with the Audi R8 LMS and on a totally new track for me, and I must admit I didn’t have much track time to adapt to all those new changes. I think I did the job right for a first time, but I would have liked to be a bit faster. Nevertheless, it was a very positive first time. The important thing was to realize that we can work together with the Hitotsuyama Racing team members and the communication went super smoothly. Also, my teammate Akihiro Tsuzuki seems like a super nice person and I really think we can work well together. I’m already looking forward to the first test session in one month, on once again a new track for me. After those first pre-season tests, I have the feeling that everything will go very quickly.”

Right from the start, the Hitotsuyama Racing team has offered all its support and experience to Cyndie, with its impressive professional approach. Team owner Mr. Mikio Hitotsuyama was the first to announce the good news to Cyndie, immediately as she got out of the car after the afternoon test session: 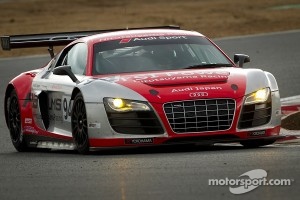 “Cyndie drove our Audi R8 LMS very well and we could watch her become more and more at ease with the car. She has already made enough lap times for us to make a final decision. I am totally certain that she can succeed in Japan. Not only she is fast, but also she is fan friendly. We want to race with Cyndie!”

Always eager to experience new and rich cultures, Cyndie is already looking forward to the time she will spend in Japan in the coming year:

“In my dreams about Japan, I must admit that I was expecting something different, especially regarding the landspace. I was surprised to realize that it feels like Europe, in many ways. Obviously, downtown Tokyo is very impressive with its lights and many tall buildings. Now, I would like to see more of the Japanese countryside and all its authentic and traditional lifestyle, which does contribute for Japan’s beauty. Otherwise, Japanese are very friendly and want to laugh all the time, with a great sense of humor. I’ve slowly started to pickup some Japanese words. I think 2012 will be a very gratifying year, for my personal development.”

Cyndie Allemann: a World class driver, top athlete and brand ambassador. Always a fan favorite, whether in Europe, in the USA and soon in Japan, 25 years old Cyndie Allemann was literally born for speed.

Her 18-year racing career has seen her compete at the highest levels in many different series and tracks around the World: karting (winning the European junior title when she was only thirteen), open-wheel (EuroF3, Indy Lights, etc.), GT (FIA-GT1 World Championship) and endurance racing (GT1 podium at Spa in the Le Mans Series, 24 Hours of Le Mans, etc.)

For more info on Cyndie or to follow her, visit her web site and her facebook fan page at:
www.cyndieallemann.ch
www.facebook.com/CyndieAllemannOfficialPage

Founded in 1990 by Mikio Hitotsuyama, Hitotsuyama Racing team has an experience of more than twenty years in auto racing. The team has competed in many top level championships such as the Super GT (formerly known as the JGTC), the Le Mans Series, the Japan Le Mans Challenge (in LMP1, GT1 and GT2 classes), the Porsche Carrera Cup Japan and the Japan Touring Championship. The team has raced many top drivers and set itself apart by its bold vision regarding its racing programs, as well as its ultra-professional approach. Its 2012 racing program includes a full participation in the Super GT championship with two Audi R8 LMS in the GT300 class.

For more info on Hitotsuyama Racing, visit the team web site at:
www.hitotsuyamaracing.net

WEC getting rid of grid girls for all events, including Le Mans

Cyndie Allemann to race at the 24 Hours of Dubai