Team Studie's BMW M4 GT3 was "in the zone" on the way to a landmark first win for the squad in last weekend's Suzuka SUPER GT race, Seiji Ara says.

In just its third outing in Japan's top sportscar series, Studie's Michelin-shod M4 was victorious in the hands of Ara and Tsubasa Kondo, who was standing in for the team's absent regular driver Augusto Farfus.

It marked BMW's first win in SUPER GT's GT300 class since 2018, while for Studie it was also a maiden victory as an independent outfit since its split from Goodsmile Racing at the end of 2013.

The Suzuka weekend second started well as Ara and Kondo initially qualified the M4 in a strong second, later being promoted to pole when the #10 Gainer Nissan was thrown out of qualifying for a ride height infringement.

Ara took the start and maintained the lead until handing over to Kondo, who withstood an attack from the Team Mach Toyota 86 Mother Chassis car that had jumped up the order by virtue of not changing tyres at its pitstop.

But the Mach challenge soon faded, leaving Kondo alone to secure his second GT300 win and a first for veteran racer Ara.

"Since 2014 I’ve been with Studie, and this is the team’s first win," said Ara. "Up to now, we’ve only been second, and ‘Bob’ [team owner Yasuaki Suzuki] told me before the race ‘second is the same as last’.

"I think he would have been in a bad mood if we had finished second, but finally we could give him this present. It’s also my first win in GT300. I’ve won a few times in GT500, but… GT300 is really hard, right! 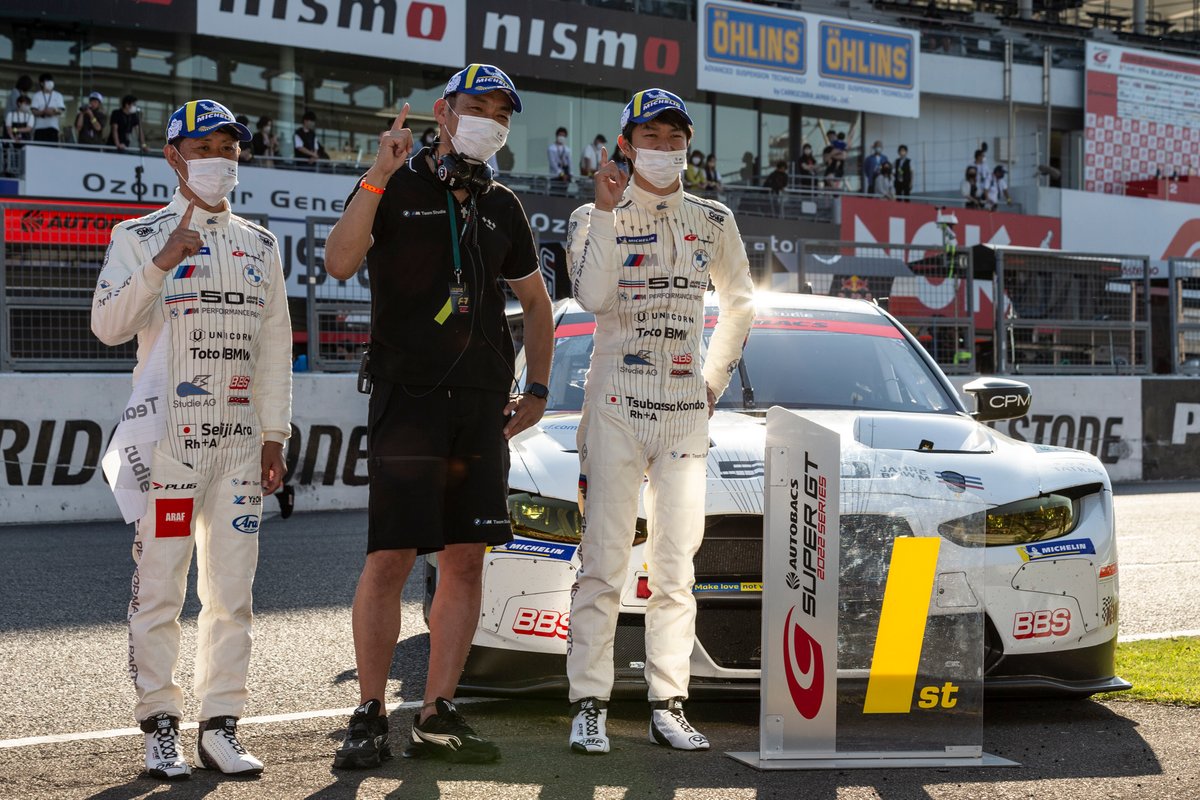 "Kondo-san did a great job with his attack lap in qualifying. We had some luck as well [being promoted to pole], but we were able to start from a good position, and I was able to run well in my stint.

"It’s only the third race for the M4 GT3, but the car was quick at Suzuka and it felt like, with the combination of the car with the Michelin tyres, we had finally entered the ‘zone’."

Studie's victory at Suzuka comes off the back of a promising but disappointing start to the year for Ara and BMW works driver Farfus, who had to prioritise his Nurburgring 24 Hours duties last weekend.

The pair were on course for a top-six finish in the Okayama season opener, only for a late collision with the ARTA Honda of Iori Kimura to put paid to that, and in the following race at Fuji they retired early with power steering issues.

However, Studie's win has propelled Ara to second in the GT300 drivers' standings behind Kondo Racing pair Joao Paulo de Oliveira and Kiyoto Fujinami, who finished third at Suzuka.

"We weren't able to score points in the first or second races, so this marks our first points finish," noted Ara. "In the second half of the season we don't want to drop any more points, we want to score consistently and be ready to compete for a top result when the chance comes again."

Farfus is set to return to the Studie line-up for the next race at Fuji in early August.

The Kondo Racing Nissan SUPER GT team admits that it threw away a strong chance of a victory at Autopolis because it couldn't "trust" its Yokohama tyres to last long enough in the second stint.

Nobuharu Matsushita says he went into last weekend's Autopolis SUPER GT race "super-relaxed" despite his crash in practice, as he and Real Racing Honda teammate Koudai Tsukakoshi scored a crucial first win of the season.

Honda's hopes of taking the SUPER GT title were given a timely boost with a 1-2 finish in the penultimate round of the season at Autopolis, as Real Racing duo Koudai Tsukakoshi and Nobuharu Matsushita took a first win of 2022.

The Kondo Racing Nissan team scored a surprise first SUPER GT pole position in five years for this weekend's penultimate round of the season at Autopolis.