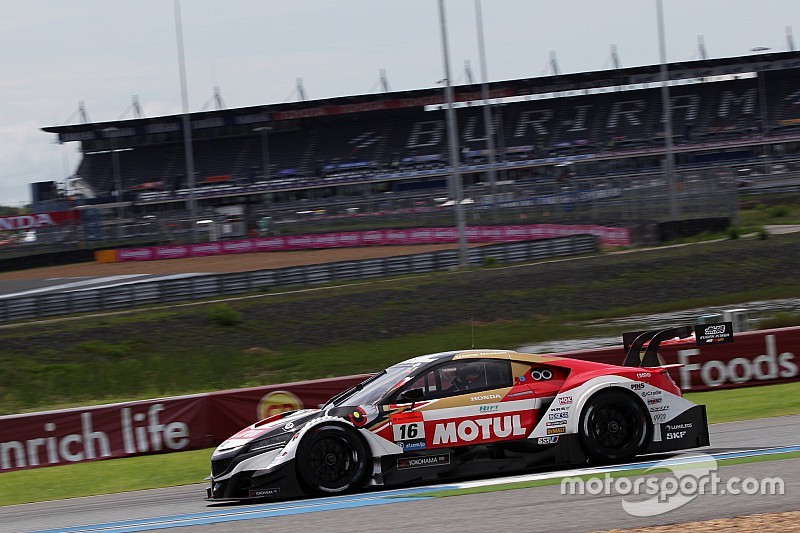 Honda locked out the Super GT front row for the third time in 2018 as the Mugen NSX-GT of Hideki Mutoh and Daisuke Nakajima claimed pole position in Thailand.

Rain hit the Buriram International Circuit some 45 minutes before the start of qualifying and caused a 15 minute delay, but the track dried sufficiently for slicks when Q2 began.

Former Formula 1 driver Heikki Kovalainen was the first driver to set a competitive time, but his lap of 1m23.882s was beaten by nearly four tenths of a second by Real Racing Honda’s Koudai Tsukakoshi.

The Okayama winner, who is teammate to Takashi Kogure, stayed on top of the timesheets until the final minute of the session when Nakajima clocked a time of 1m23.341s to seal pole position.

With that time, Nakajima not only set a new track record, but also scored Mugen’s first GT500 pole since 2001.

Tsukakoshi and Kogure managed to hold on to their front row slow after Kovalainen, who shares the Sard Lexus with Kamui Kobayashi, ran wide at the final corner and failed to improve on his previous flyer, settling for third.

Yamamoto managed to advance into the final leg of qualifying session in tricky wet/dry Q1 conditions, with Button taking over and qualifying the car in fifth despite heavy ballast and fuel flow restrictions on his NSX-GT.

Yuji Kunimoto and Yuhi Sekiguchi were sixth fastest in the Bandoh LC500, one of the two Lexus cars to progress to Q2, with practice toppers  Jann Mardenborough and Daiki Sasaki qualifiying seventh in the Impul Nissan.

Suzuka winners Tomoki Nojiri and Takuya Izawa were next up in eighth in the ARTA Honda, over a second down on the pole car.

Practice pacesetters Satoshi Motoyama and Katsumasa Chiyo will start ninth in the B-Max Nissan, just ahead of the #36 TOM’S Lexus of Kazuki Nakajima and Yuhi Sekiguchi.

The sister TOM’S car of Nick Cassidy and Ryo Hirakawa also failed to progress into Q2, the defending champions consigned to 12th on the grid.

NISMO duo Ronnie Quintarelli and Tsugio Matsuda, who sit second in the standings, were also knocked out in Q1 and will have to start from the back of the pack for the second race in a row.

Caldarelli, who raced for Lexus in the premier GT500 class until last year, lapped the Buriram circuit in 1m35.544s, identical to what Naoya Gamou managed a few minutes later in the #65 Leon Mercedes.

Gamou and teammate Haruki Kurosawa will start ahead of the #10 Gainer Nissan of Kazuki Hoshino and Hiroki Yoshida, which in turn qualified two positions ahead of the points-leading #55 ARTA BMW of Sean Walkinshaw and Shinichi Takagi.