Shortly after sprinting past the Impul Nissan of Daiki Sasaki and Jann Mardenborough to seize the lead, Button ran wide at the final corner while lapping GT300 traffic, running over a combination of grass and asphalt run-off area.

This partially blocked the radiator of his Team Kunimitsu Honda NSX-GT, but the Englishman was able to cruise to the finishing line without running into overheating issues.

Asked if he damaged the car by going off-track, Button replied: “Ah, no. The #12 car [Impul Nissan] did the same thing and it’s my first experience of racing here.

“Naoki [Yamamoto] warned me in the last corner there are marbles. But I didn’t really go that far off the line because there were two very slow [GT]300s in front and I tried to overtake.

”I don’t know what, they might have had a problem. So I tried to go out a little bit and suddenly the front was gone. It was like driving in the wet.

“Drove off the circuit and then I found grip to get back on the circuit, so I probably lost three seconds. Was able to clean the tyres very quick, which is lucky. The only problem was there was grass in the radiator but everything’s OK.”

Button went through another hairy moment on the final lap of the race, when he passed the medical car in the middle of the chicane while defending against the ARTA Honda of Takuya Izawa and Tomoki Nojiri.

While Super GT’s FRO (First Rescue Operation) vehicles are allowed to enter the track under yellows and are known not to create trouble, the medical car Button encountered was one sent out by the track itself.

Button not only scored his first Super GT win with teammate Yamamoto on Sunday, but also his first victory in any category since the 2012 F1 Brazilian Grand Prix.

It came at Sportsland Sugo, a lesser known but highly-rated track in the northern half of mainland Japan where Button had tested but never raced before.

“What an amazing experience though. Very emotional victory for the whole team, our first win together.

“Obviously [for] Naoki it hasn’t been so long since he won his last race, but for me it’s been six years so it’s a long time coming.”

Following the victory, Button and Yamamoto not only returned to the top of the drivers’ standings, but also opened up a 12-point lead as several Lexus teams, which previously dominated the top of the leaderboard, endured a difficult race. 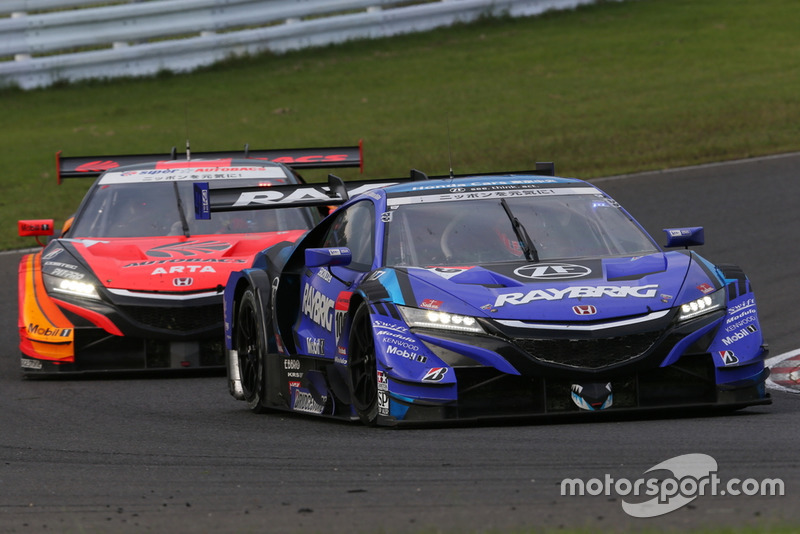