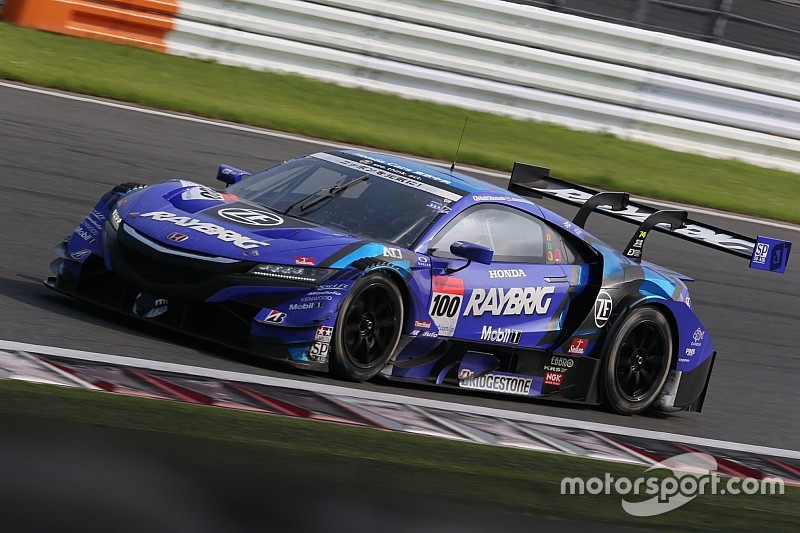 Button was handed a 10-second stop/go penalty for lapping a GT300 car under yellow flags during his first stint on Sunday, dropping him right down the order.

The 38-year-old and Team Kunimitsu stablemate Naoki Yamamoto managed to make up for the lost time by extending each of their next stints, taking advantage of the superior Bridgestone rubber on their Honda NSX.

They eventually finished as the third-best Honda team in fifth, 34 seconds down on the race-winning #36 TOM’S Lexus of Kazuki Nakajima and Yuhi Sekiguchi.

With the penalty costing him the best part of a minute, far more than it did for a similar offence last year where he was handed a more lenient drive-through, Button criticised the lack of consistency by the stewards.

It is worth noting that the overtake Button was penalised for in 2017 happened under safety car conditions rather than a standalone yellow flag.

“For me the frustrating thing was the penalty, it’s so big,” the former Williams and McLaren driver said.

“A drive through penalty, OK. But a 10 seconds stop/go... the strange thing is I did the same thing at Suzuka last year. I overtook under a yellow flag accidentally and I gave the position back, they gave me a penalty which is drive-through.

“And now we got stop/go. Why does it change? Why is it not consistent? It’s not correct. It needs to be consistent. If you overtake under a yellow flag, you get penalised. It doesn’t change how you get penalised, it should be the same always.”

Pressed further if he could have finished on the podium or even won the race without the penalty, Button replied: “Possible. Definitely possible. Yeah, who knows. It didn’t happen.”

With two podiums and only a single non-points result, Button and Yamamoto sit joint second in the drivers’ standings with Sekiguchi and only seven points behind championship leaders Nick Cassidy and Ryo Hirakawa.

And with the next two races at Sugo and Autopolis expected to favour the Hondas, Button feels he has a “good chance” of winning the title in his debut season.

“Yeah, I think we’ve got a good chance. It’s always difficult because I feel there are many times we could have scored more points,” he said.

“But with the way the championship is with weight restrictions, points, everyone is very similar with points because one car is fast because it’s light.

“So Super GT is very difficult I think you just have to focus on every weekend, doing maximum attack.

“For me I still have to learn a lot but now I feel very confident with the car and myself. So Sugo hopefully will be a good race for us and then Autopolis is another good circuit for honda, when we have half weight.

“And Motegi maybe a little bit more difficult because Nissan is very fast. So we need good points at Sugo and Autopolis and yes we can fight for the championship.”