Blow-out pushes Weider Honda of its road to the rostrum 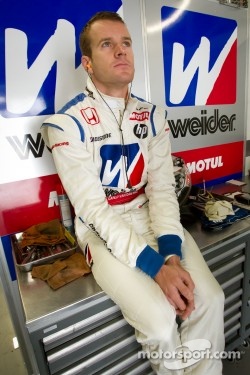 Suzuka - Dutchman Carlo van Dam and his Japanese team mate Takashi Koguree today finished in eighth place in the Suzuka 1000 KM. The duo looked set to take their Weider Honda HSV-010 to a top three finish in what was the fifth round of Japan’s Super GT series, but a tyre blow-out and its consequences demoted the car to eighth place.

“A real shame”, Carlo said, “because up until that moment we had a strong and problem-free race, and we were on a very promising pit stop strategy as well, and the result of all that was that we were heading for a top three finish.

“We were in fact already in third place when the tyre went, and as that happened at the start of the lap, the whole driving back to the pits took quite a lot of time, and of course it did a lot of damage to the car as well, which had to be repaired first.

“Ultimately, we finished in eighth place and scored enough points to consolidate our fifth place in the standings, but that was not what we’d came here for, naturally, and without the blow-out we would have scored many more points that would have moved us higher up the rankings.”