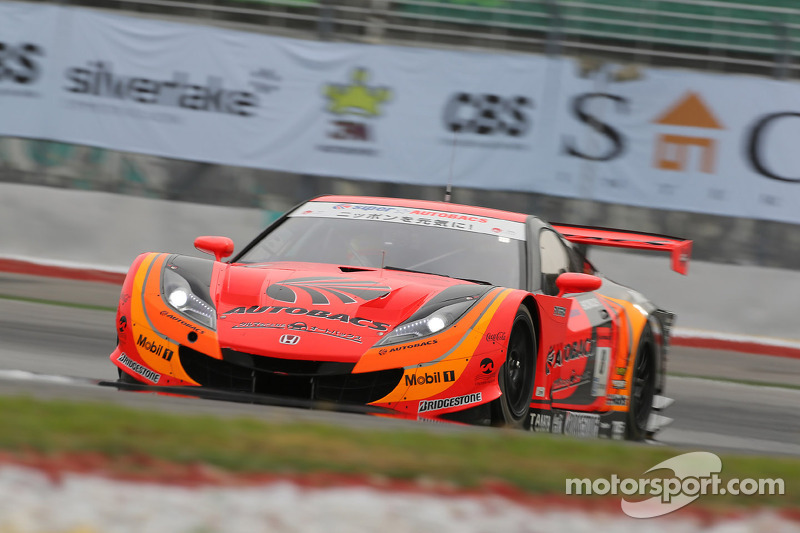 The Sugo GT 300km race, Round 4 of the 2013 Autobacs Super GT series, was run at Sportsland Sugo (one lap: 3.704 km x 81 laps) in Miyagi Prefecture on July 28. In the GT500 class race the ARTA HSV-010 driven by Ralph Firman and Kosuke Matsuura won the team’s first victory in three years. In the GT300 race, the ARTA CR-Z GT driven by Shinichi Takagi and Takashi Kobayashi took its second straight series win to make ARTA victorious in both classes.

Saturday’s qualifying had been run in intermittent rain, but race day brought blue skies and summer sun to the Sugo circuit. A crowd of over 25,000 spectators was on hand to watch the racing begin in Round 4 of the series.

The early stages of the race were led by the pole-starting Reito Mola GT-R after a well-executed start by its GT500 rookie driver, Yuhi Sekiguchi. It was only after the teams had been through their routine pit stops halfway through the race that the first big developments began to take place. Rain started to fall suddenly and made the track very slippery, but it wasn’t enough to send the cars back to the pit to change to rain tires. This forced the drivers to fight on in treacherous conditions. At the same time, the battles for the lead were now more intense than in the first half of the race, and while fighting for 2nd position with Yuji Tachikawa in the ZENT Cerumo SC430, a slip sent Satoshi Motoyama and his Reito Mola GT-R off the track and out of contention at the front. This accident turned the contest for the lead into a duel between the Juichi Wakisaka in the Denso Kobelco SC430 and the pursuing Tachikawa in the ZENT. In the heat of this battle, the two machines collided while trying to get around a GT300 back marker. In the aftermath of this collision, the two cars battling for third, the Weider Modulo HSV-010 (Frederic Makowiecki) and the Raybrig HSV-010 (Takashi Kogure) also collided. In a matter of seconds the four lead cars were suddenly out of the race for the lead.

Emerging from this upset as the new leader was the KeePer TOM’S SC430 driven by Daisuke Ito and the ARTA HSV-010 with Kosuke Matsuura at the wheel. With the rain falling harder at times and less at others, the slipperiness of the track was constantly changing. Matsuura in the ARTA proved capable of handling these tricky conditions, and in the later stages of the race he was able to pass Ito in the KeePer and take the lead. From that point, Matsuura raced home to victory and gave the team its first win in three years.

For the Honda HSV-010 GT it was the second win of the season, following a victory in the opening round. For Firman it was his 11th career GT500 win and for Matsuura his momentous first win.

In the GT300 class, the pole-starting Subaru BRZ R&D Sport (Tetsuya Yamano) led in the early going with the Mugen CR-Z GT (Hideki Mutuh) and the ARTA CR-Z GT (Shinichi Takagi) in hot pursuit. The timing and speed of their routine pit stop put the ARTA CR-Z GT in the lead in the second half with Takashi Kobayashi at the wheel. Kobayashi kept control through the severe conditions as rain fell with varying intensity and he was able to run on to victory. For the ARTA CR-Z GT it was a second consecutive win following the victory at Sepang in the last round. It was also the second win of the season for the Honda CR-Z and the third win in four rounds for the two hybrid rivals combined.

Ralph Firman: “It is our first victory in some time and I am really thrilled. Because, it is not only my first win but also my first podium finish in quite some time. I want to thank Honda and Autobacs for the support they have continued to give me, and thank the team for preparing the car so well. And, most of all, thanks to Matsuura for driving so well in the rain. Recently, we have had some bad luck and haven’t been able to produce the results we should. But finally, thanks in part to some lucky developments, we were able to win. From now on I want us to make our own luck and go for the title.”

Kosuke Matsuura: “It is the first [GT500] win in a long time for the team, but it is also my first win in ten years, going back to 2003 in my Formula Renault V6 days. And, since I didn’t have any wins in GT300, this is my first Super GT win ever. Although we were helped by some good luck today, I want to forget all the bad luck we have had until now and start with a new determination that the race for the championship starts here. I can’t let this first win go to my head, because I am actually a rookie when it comes to GT500 and there is still so much work I have to do and things to learn here, and from Firman in many ways as well.”

Shinichi Takagi: “I am happy for our win, but I’m even more happy that Autobacs (ARTA) got its first double win [in GT500 and GT300]. For us it is the second straight victory in the series, but in the last race we were slower than our rivals in the routine pit work. So, the team practiced our pit stops over and over, and in this race we were actually able to complete the pit work and return to the race in the lead after entering the pit in 2nd place. The fact that [Takashi] Kobayashi was then able to hold on to that lead to the finish was also a great achievement. So, this was truly a victory won by the entire team.”

Takashi Kobayashi: “For being able to win like this for the second round in a row, I want to thank all the people involved at Honda and M-TEC, at Bridgestone and at Autobacs. [Shinichi] Takagi pushed hard and brought us to the routine pit stop in a nose-to-tail battle for the lead, and then we were able to get back into the race with the lead in our hands. At the end, the rain made it so difficult to even keep the car on the track that I was seriously debating whether we should return to the pit and change to rain tires, but the word came from the pit to keep on driving, so I did. This race was the first double win for the [ARTA] team and I am really thrilled that I was able to take the checkered first.”