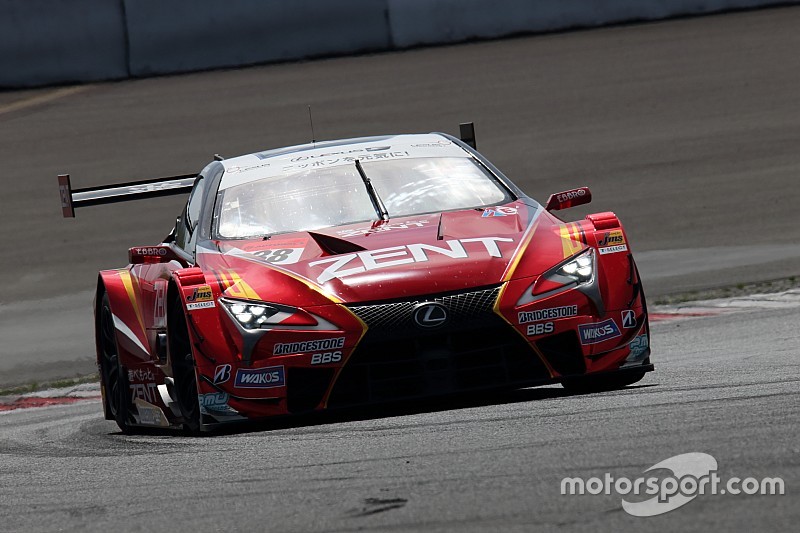 The Cerumo Lexus team claimed victory in Super GT’s Fuji 500km round after coming out in top in a race-long battle with Nissan’s factory-entered NISMO squad.

The race ebbed and flowed between the two teams as the track dried out after early showers, with Yuji Tachikawa and Hiroaki Ishiura sealing victory with a move just 11 laps before the finish.

Ronnie Quintarelli started the race on pole in the NISMO GT-R, one place ahead of the #36 TOM’S Lexus driven in the first stint by Nick Cassidy.

Quintarelli struggled to get heat into his car’s Michelin tyres at the start, allowing Cassidy to come through and take an early lead.

At the same time, Fuji maestro Tachikawa was navigating his way up the field from seventh on the grid, and was running in third place by lap 7.

When Cassidy ran wide at the Dunlop corner on lap 8, Tachikawa took advantage of the TOM’S driver’s lost momentum to sprint pass him on the following lap - and then set about chasing Quintarelli.

Five laps later Tachikawa found a way past Quintarelli on the run down to Turn 1, sealing the move a few corners before the race was brought under safety car as the conditions began to worsen.

A 30-minute red-flagged followed, before racing resumed on a wet but drying track.

Quintarelli again took time to find the rhythm, losing places to both Cassidy and Tachikawa before re-passing both of them to retake the lead on lap 31.

The order at the front remained the same after the first pitstop, before an incident put the #37 TOM’S car Cassidy shares with Ryo Hirakawa out of contention.

Just after the stops had been completed, Hirakawa and James Rossiter made contact as the Impul driver tried to pass the 2017 champion around the outside of turn 1. Rossiter’s Nissan spun in the process, while Hirakawa had to make an unscheduled stop and put on a fresh set of tyres.

Ishiura managed to pass Matsuda for the lead on lap 59 at the Coca Cola corner, but the second pitstop cycle put the NISMO team back at front, opening the way for a straight fight to the finish.

After losing several seconds in the pits, Tachikawa slowly but steadily started cutting into the advantage of Quintarelli and finally made a lunge at Turn 1 on lap 99.

While he ran deep into the corner, the 43-year-old held on to score his ninth personal victory at Fuji.

Quintarelli and Matsuda dropped several seconds off in the final parts of the race, extending Nissan’s victory drought to five races.

The 30-year-old slipped to 14th, only ahead of the similar Honda of Nakajima Racing, in the early laps of the race, before the red-flag gave him a new lease of life.

Within a few laps Yamamoto had found his way up to eighth place, with errors for some of the rivals after the first round of pitstops allowing Button to emerge on track in fourth place.

Yamamoto returned on track for the final stint and passed both the Sard Lexus - to which Button had lost a place - and the B-Max Nissan to score a first podium since last year’s season finale.

Yuichi Nakayama and Heikki Kovalainen finished fourth in the Sard Lexus, ahead of the Real Racing Honda of Bertrand Baguette and Koudai Tsukakoshi.

B-Max Nissan duo Frederic Makowiecki and Kohei Hirate ran as high as third place, but lost three places in quick succession after their second stop and ended up sixth at the flag.

The #11 Gainer Nissan GT-R of Katsuyuki Hiranaka and Hironobu Yasuda took the top spot in the GT300 category, after holding off Shinichi Takagi and Nirei Fukuzumi’s #55 ARTA Honda NSX GT3 on the run to the finish line.

Hiranaka and Yasuda had moved into the lead early in the race and at point enjoyed an advantage of over 10 seconds, but a decision by the ARTA squad to not change tyres in the second stint suddenly brought them in contention for the lead.

Takagi tried to overtake Yasuda at the final turn but was unable to find a way past, the two drivers crossing the line 0.239s apart from each other.