Tsukakoshi had been running third when the race was turned on its head just after a late full course yellow period, with the two leading cars dropping out of contention in rapid succession for unrelated reasons.

That put Tsukakoshi in the lead of the race and the 34-year-old was able to withstand intense pressure from Kenta Yamashita's Rookie Racing Toyota to win SUPER GT's sole endurance event of 2021.

The Real Racing squad had qualified down in 11th place in a grid of 15 GT500 cars, but became the favourite for victory mid-race after an inspired decision to pit on lap 31 of 110, immediately before the first full-course yellow period, granted it the lead.

A spectacular middle stint by Bertrand Baguette in which he stretched out an 11-second advantage only added to Real Racing's chances, but a slower second pitstop brought the ARTA Honda and the #36 TOM'S Toyota back into play.

ARTA driver Nirei Fukuzumi emerged in the lead of the race following the final round of pitstops but was unable to defend from Tsukakoshi's Real Honda on cold tyres, dropping initially to second.

However, once his tyres were up to the temperature, the two drivers engaged in a thrilling duel and traded places for several laps, before Fukuzumi made what appeared to be the decisive move coming into the final corner on lap 87 of 110 to reclaim the lead.

A third FCY of the race soon followed, deployed to recover the #31 apr Toyota Prius that had stopped on track with apparent technical issues.

When the race resumed Tsuboi couldn't return to full power again and was forced to park the #37 Supra near the Coca Cola corner, seemingly granting Fukuzumi an easy run to the chequered flag.

But shortly afterwards the ARTA Honda driver was handed a drive-through penalty for overtaking under a yellow flag, putting Tsukakoshi back in the lead of the race.

As the first of the GT500 runners to complete its second stop on lap 68, Real Racing was likely marginal on both fuel and tyres in the final stint, allowing Yamashita to close right on the tail of Tsukakoshi.

A wide moment at Turn 1 following a tyre lock-up added to Yamashita's chances, but Tsukakoshi never allowed the 2019 champion to get close enough to make a move.

On the final lap Yamashita fell into the clutches of a charging Ryo Hirakawa, allowing Tsukakoshi to escape up the road and score Real Racing's first victory since last year's Motegi event. 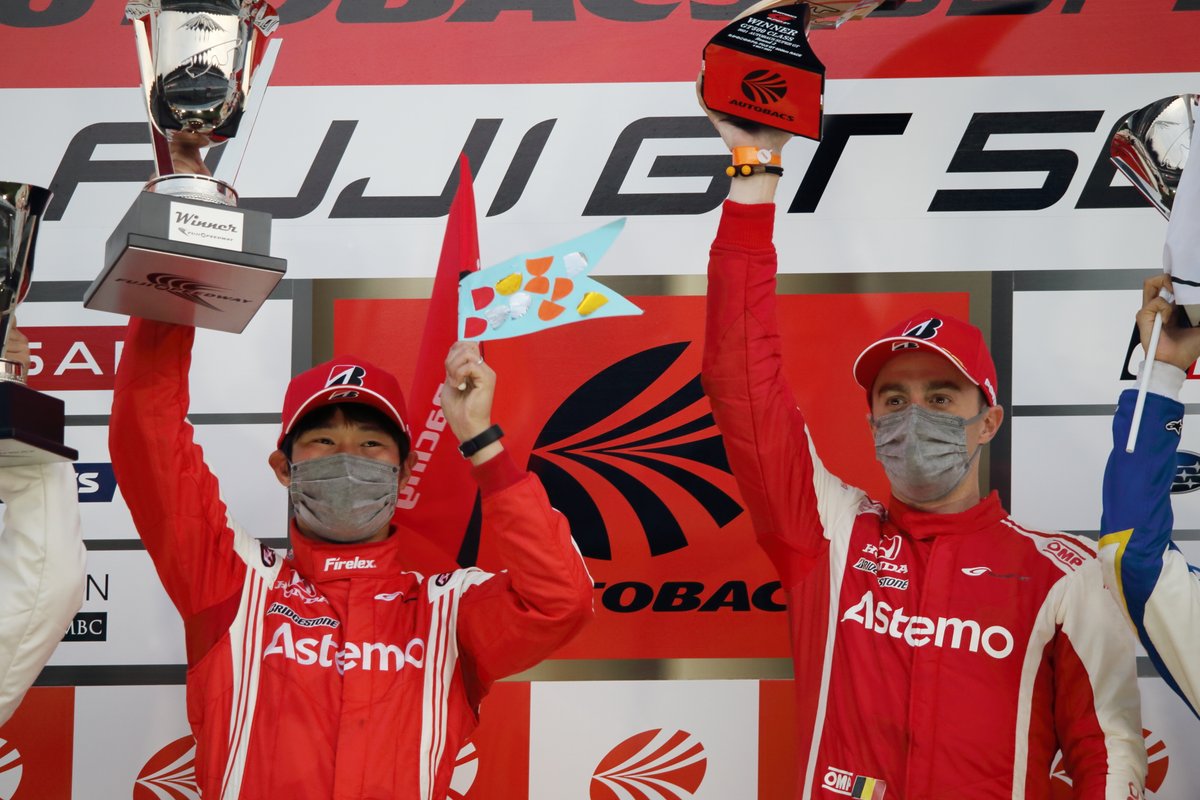 Yamashita held on to second in the Rookie Supra he shares with Kazuya Oshima, while Hirakawa completed the podium spots in the #37 TOM'S Supra he was driving with Sacha Fenestraz's stand-in Sena Sakaguchi.

Naoki Yamamoto and the returning Tadasuke Makino were able to recover from the rear of the pack to finish fourth in the Kunimitsu Honda, losing a place to Hirakawa right at the death of the race.

Yamamoto and Makino competed as a duo, with the team electing not to use Hideki Mutoh in the race.

The B-Max/NDDP team finished as the top Nissan GT-R squad in fifth, but with Kohei Hirate and Katsumasa Chiyo finishing over 30 seconds behind the leading quartet.

The SARD Toyota of Heikki Kovalainen and Yuichi Nakayama couldn’t match the pace of the other Bridgestone-shod Supras but benefitted from the late drama to finish sixth, ahead of the Yokohama-shod Bandoh Toyota of Yuji Kunimoto and Ritomo Miyata that dropped from first to sixth in the opening two laps and could never recover from its slow start.

While the full-course yellow made its debut in SUPER GT at Fuji, the race also witnessed a full-blown safety car when the NISMO-entered Nissan GT-R of Ronnie Quintarelli suffered a spectacular engine blow-up at the start of lap 3, leaving a cloud of smoke behind.

Likewise failing to finish was the Cerumo Toyota of Hiroaki Ishiura and Yuji Tachikawa, which unusually shed its left-rear wheel towards the end of its first stint. 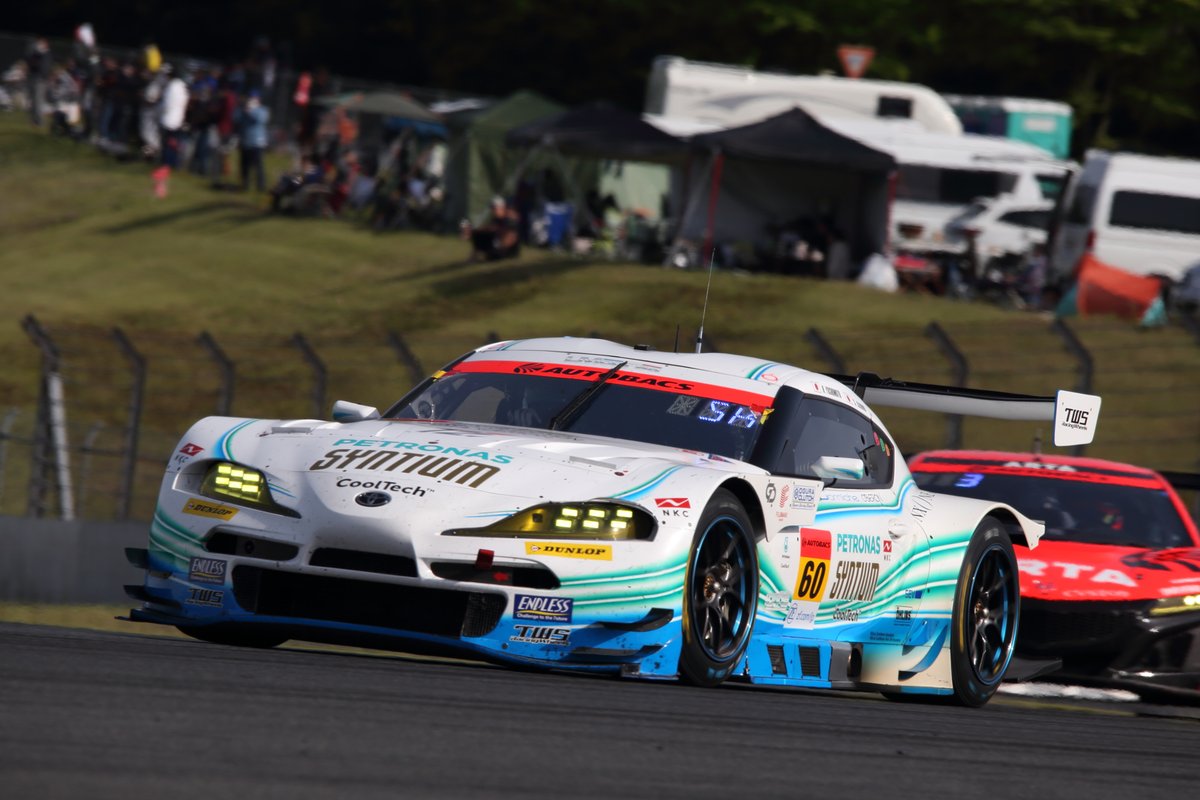 Saitama Toyopet drivers Hiroki Yoshida and Kohta Kawaii jumped into the lead at the first round of stops by not changing tyres, after the pole-sitting Subaru and LM Corsa cars ran in close formation at the head of the field in the opening stint.

LM Corsa pair Shunsuke Kohno and Hiroki Yoshimoto jumped ahead in the second round of stops, and were promoted into the lead when the Saitama Toyopet car ground to a halt out on track with only six laps to go.

ARTA Honda pair Shinichi Takagi and Ren Sato finished just 1.2s behind the leader in third, having started second, while completing the top five were the LEON Mercedes AMG-GT3 of Naoya Gamou and Togo Suganami and the best of the Gainer Nissan GT-R NISMO GT3s, the #10 car of Kazuki Hoshino and Keishi Ishikawa.

The Okayama-winning Kondo Racing squad recovered from 26th on the grid to finish seventh with Joao Paulo de Oliveira and Kiyoto Fujinami behind the wheel of its Nissan.