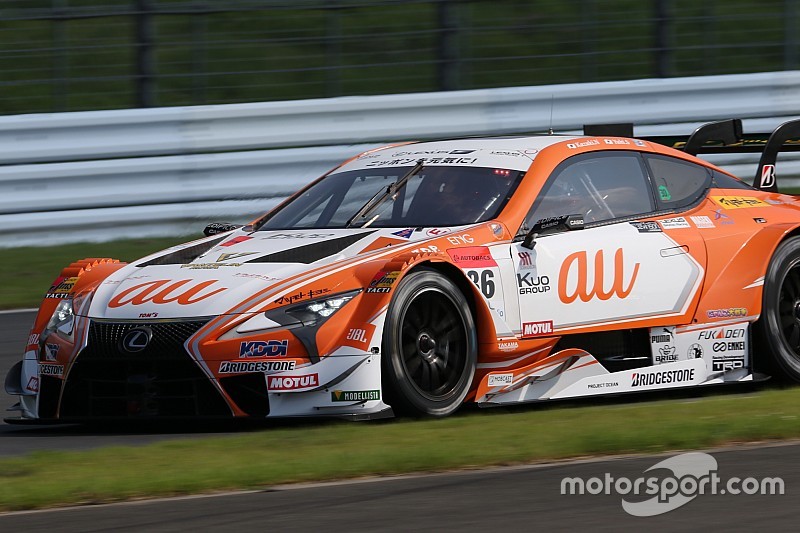 Lexus secured a surprise 1-2 finish in the Fuji 500 miles Super GT round after the race-leading Nissan ran into technical issues in the final hour.

Impul’s Daiki Sasaki struggled with tyre heating issues in the opening stages of the race and dropped as low as sixth, before staging a remarkable recovery drive and be up to third by the first round of pitstops.

The #36 TOM’S Lexus, second at the time, suffered a slow left-rear tyre change at this stage of the race, allowing Sasaki’s teammate Jann Mardenborough to move up a place and chase down the pole-sitter NISMO GT-R car.

Mardenborough and NISMO’s Tsugio Matsuda ran wheel-to-wheel for several laps, before the GT Academy graduate made a textbook pass at Turn 1 to assume the lead.

With the Bridgestones on the Impul offering high durability, both Mardenborough and Sasaki were able to build a mammoth 25-second lead to head to the final hour as favourites for the win.

However, on Lap 147, Sasaki began to slow down with an apparent lack of power and although Impul was able to fix the car relatively quick, the time lost dropped it outside the points.

The Michelin-shod NISMO GT-R also fell out of contention with tyre wear, forcing it to make an extra pitstop towards the latter stages of the race.

It was Lexus benefitting from Nissan's late troubles, with Kazuki Nakajima and Yuhi Sekiguchi inheriting the victory in the #36 TOM’S despite two slow pitstops.

Defending champions Nick Cassidy and Ryo Hirakawa finished 1.564s down the road, ensuring a 1-2 finish for not just Lexus but also for the TOM’S team.

The outfit’s two cars were embroiled in a short but close battle in the third hour, with Sekiguchi making an opportunistic move on Cassidy at T11 that would eventually decide the race.

Honda teams strategically crept their way up the pack during the middle part of the race, with the Okayama-winning Real Racing Honda of Koudai Tsukakoshi and Takashi Kogure claiming the final spot on the podium after starting 14th on the grid.

The ARTA Honda of Tomoki Nojiri and Takuya Izawa qualified much further up but slipped behind the Real NSX-GT around the 100-lap mark and ended up fourth.

Despite a Real Honda-induced spin for Naoki Yamamoto and a drive-through penalty for Jenson Button for lapping a GT300 car under yellows, the Team Kunimitsu pair managed to finish fifth and retain second position in the drivers’ standings.

Joao Paulo de Oliveira and Mitsunori Takaboshi were Nissan’s top finishers in sixth, the Yokohama tyres on their Kondo GT-R also not a match to the Bridgestones that the majority of Honda and Lexus runners used on a hot day at Fuji.

Felix Rosenqvist and Kazuya Oshima were next up in seventh in the Team LeMans Lexus and ahead of the similar Zent Cerumo LC500 of Yuji Tachikawa and Hiroaki Ishiura.

Matsuda and Ronnie Quintarelli eventually wound up ninth in the factory NISMO after their aforementioned tyre woes, while the final point was bagged by the Bandoh Lexus of Yuji Kunimoto and Kenta Yamashita.

The #55 ARTA BMW duo of Shinichi Takagi and Sean Walkinshaw gained the GT300 lead on Lap 9 and held onto the spot to claim their second win of the season, the first of which also came at Fuji.

Nobuteru Taniguchi and Tatsuya Kataoka finished a distant second in the #0 Team Ukyo Mercedes, while the podium was completed by the #26 apr Toyota of Koki Saga and 2016 GT500 champion Kohei Hirate.