The qualifying for the Fuji GT 500km Race, Round 2 of the 2013 Autobacs SUPER GT, took place at Fuji Speedway (one lap 4.563 km) in Shizuoka Pref. on April 28th. The GT500 class pole position winner was the Petronas Tom's SC430 driven by Kazuki Nakajima and James Rossiter. In the GT300 class, the Subaru BRZ R&D Sport driven by Tetsuya Yamano and Kota Sasaki won its second pole position in consecutive rounds. These results put the two machines on the front row of their respective class grids for the start of the race on the 29th. 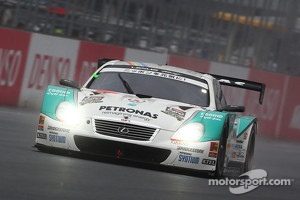 From this season, the qualifying is being run in a new two-session “knock-out” format (Q1 and Q2) with the cars recording slowest times in Q1 being knocked out of the final qualifying in Q2. In the GT500 qualifying, the top eight cars of the 15 entries proceed to Q2.  Qualifying day saw clear blue skies over Fuji Speedway with a scenic view of Mt. Fuji in the distance. In Q1, most of the teams didn’t make their timed-lap runs until the last five minutes of the session. The qualifying session had been stopped at one point because of a car coming to a stop on the straight due to machine trouble. This forced most of the teams to make a one-shot attempt for a qualifying lap time in the last five minutes. In this hectic series of time attacks, it was Juichi Wakisaka in the Denso Kobelco SC430 that recorded the fastest lap time. Coming in with the 2nd fastest time was former F1 driver James Rossiter, who makes his SUPER GT debut this season.  The top eight qualifiers from Q1 of the GT500 class won the right to move on to Q2 and compete for pole position. That Q2 contest turned out to be a duel between Lexus SC430 cars, known for their continuing success at Fuji Speedway. Among them, it was Kazuki Nakajima in the Petronas Tom’s SC430 who scored the top time of 1’31.040 to beat out the likes of last year’s round 2 Fuji winner, the Denso Kobelco SC430 driven by Hiroaki Ishiura, the Zent Cerumo SC430 driven by “Fuji Meister” Yuji Tachikawa and last season’s title-winner, the Motul Autech GT-R driven by Ronnie Quintarelli. With his time unbeaten in the closing minutes of the session, Nakajima won the GT500 class pole position.  In 2005, Nakajima won a single pole position in the GT300 class before going of to race in Europe and eventually in F1. Since returning to the Japan race scene in 2011 and beginning to compete in GT500, this is Nakajima’s first GT500 class pole position. For Lexus Petronas Team Tom’s, this is the team’s 10th pole position and its first since 2004. For the Lexus SC430 it is the 15th pole.  Kazuki Nakajima is the eldest son of Manager Nakajima of the Epson HSV-010 Nakajima Racing team, who himself was the first Japanese driver ever to win a regular seat in F1. Kazuki’s younger brother, Daisuke Nakajima is also a GT driver, currently driving for his father’s team. 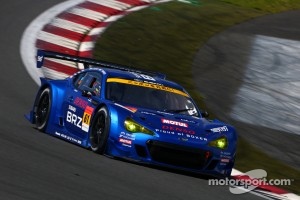 The rivalry that is certain to unfold between the Nakajima brothers and their teams is one of the things fans will be watching this season.

In the GT300 qualifying, Kota Sasaki starts the season with his second straight pole position driving the Subaru BRZ R&D Sport. The pole won in round one of the season was the first for the BRZ and this is their second overall. For Kota Sasaki, it is the seventh GT300 class pole position of his career.


No. 36 Petronas Tom's SC430 [GT500]
Kazuki Nakajima: “I won the pole position at the Fuji Sprint Cup here last year, but this is my first pole in a regular GT series event, and for the team it is the first since 2004. So, it has really been quite a while and I’m glad for the team that we got this pole. The condition they have the machine in now is so good that there is really nothing I can complain about. So good in fact that I felt I was able to get good times and win the PP just by driving normally. Since there were a number of drivers like Tachikawa-san (car No. 38) and Oshima-san (No. 6) who are especially strong at Fuji, I honestly felt nervous going into the qualifying today. So, to tell the truth, I am relieved to get this pole.”

No. 61 Subaru BRZ R&D Sport [GT300]
Kota Sasaki: “I never imagined that I would be here for a press conference after winning pole position in two consecutive rounds, and I especially did not think I could win the pole here at Fuji [where the foreign GT3 cars are strong]. So, to tell you the truth, I am quite surprised. In fact, I got sick and was in the hospital until Wednesday and worried that I might not be able to compete in this round at all, but the team took good care of me. When I started driving, the feeling got better with each lap, and although this was my first time running at Fuji on Michelin tires [that the team has begun using this season], the feeling was that they fit just perfectly.”