This was of course the first SUPER GT win for the new Lexus RC F.

The Okayama GT 300 Km RACE, Round 1 of the 2014 AUTOBACS SUPER GT series, took place at the Okayama International Circuit (one lap 3.703 km x 81 laps, shortened one lap due to two formation laps) in Okayama Pref. on April 6th. In difficult conditions involving occasional rain, the No. 37 KeePer TOM'S RC F (Daisuke Ito/Andrea Caldarelli) continued to run strongly throughout to score a come-from-behind victory. In doing so, the team became winners of the memorable first race reborn GT500 class competed by all new machines. 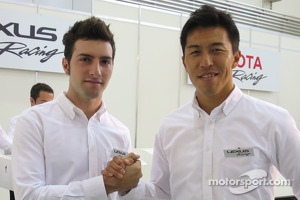 Rain fell during the morning practice session at Okayama International Circuit, but the weather improved from shortly before noon. At the time of the start at 2:00 pm, the air temperature was a chilly 9 degrees C. but the course condition was dry.

The SUPER GT races use a rolling start from a formation lap with the cars running in grid order. This time a second formation lap was required, so the race itself was shortened by one lap. At the start, Kazuya Oshima in the pole-sitting No. 6 ENEOS SUSTINA RC F had to hold off the 2nd-position grid starter, Joao Paulo de Oliveira in the No. 12 CALSONIC IMPUL GT-R who had nearly come alongside, but was able to enter the first turn still in the lead. After that, there were incidents like a collision between the GT-R machines running behind the lead ENEOS SUSTINA RC F that caused them to drop back.

Moving up in their place was5th-position grid-starting No. 37 KeePer TOM'S RC F driven by Andrea Caldarelli. It wasn’t just luck that got No. 37 it that position, however. It had been running at a pace within one second of the leading ENEOS SUSTINA RC F through the early stages of the race, waiting for the chance to pounce.

That chance came after the required pit stop. As the race entered its final stages around lap 55, machine trouble occurred in the ENEOS SUSTINA RC F now driven by its second driver, Yuji Kunimoto, and the car suddenly lost speed on the back straight. Not missing this chance, Daisuke Ito now driving the KeePer TOM'S RC F passed No. 6 to move into the lead. Afterwards, the pace of the ENEOS SUSTINA RC F returned to normal but not before giving up a 2 to 3 second lead. Now running in the lead, Ito in the KeePer TOM'S RC F ran like the former champion he is to stay clear of the young Kunimoto all the way to the checkered. This gave the KeePer TOM'S RC F the memorable first victory among the new machines of the newly revamped GT500 class.

Being its debut race, this was of course the first SUPER GT win for the new Lexus RC F. For Ito, it was his 11th career win in SUPER GT, and for Caldarelli it was a long-awaited first win in his third season in Caldarelli.

In the GT300 class, the 2nd-position grid starting No. 4 GOODSMILE HATSUNEMIKU Z4 driven by Nobuteru Taniguchi and Tatsuya Kataoka took the lead and held it against the challenge of another BMW Z4, the chasing No.7 Studie BMW Z4 (Jorg Muller/Seji Ara), to take the win. This was the first 1-2 finish ever for BMW machines. The GT300 class pole-starting No. 31 OGT Panasonic PRIUS (Morio Nitta/Koki Saga) suffered from machine trouble in the early stages of the race and was force to drop out. （Spectators: 18,000）


Daisuke Ito: “I am really happy that we won. I came to the LEXUS TEAM TOM’S team last season and we got the support of KeePer as sponsor in our campaign, and although I was able to work well with Andrea [Caldarelli], we just couldn’t win any races last year. So, I really wanted to our sponsor KeePer and the team a victory as soon as possible. I’m very relieved that we were able to win the opening round of this memorable debut season of this all-new car. My goal this season is certainly to get another win somewhere and get the series championship title.”

Andrea Caldarelli: “This is my third year since coming to Japan, and today I have finally gotten my first win. And, I am very happy that it came in the opening round of the new era of GT500 with all new machines. I’m am grateful to the team, to Lexus, and the TRD staff for this. Our car was late in being completed and we were only able to run it twice in the official test event (Okayama) and the maker tests (Fuji), but we had no trouble and the machine condition was good. In today’s race we chose the tires with the intention of going for the win in the second half of the race, and that is exactly how things worked out, so I pushed hard from midway through my stint. I’m happy that this led to a good result.”


Nobuteru Taniguchi: “Last year it was hard for us to get past Q1 in the qualifying, but this 2014 model is faster in the turns. Also, Yokohama prepared some good tires for us. The advances made with the tires have contributed greatly to improving our times. Our performance had been good since the maker test event at Fuji and, entering race week, the No. 7 car (Studie BMW Z4) was also performing well, so this made me feel that more than winning the race, I didn’t want to be beaten by car No. 7. That is why I am especially relieved to have won this race.”

Tatsuya Kataoka: “I’m glad we won. We started the race from 2nd position and I was able to get the lead going into the first turn. After that I wanted to build up a lead over the rest of the field, but I wasn’t able to get as fast a pace as I had hoped and they caught up with me. Especially when it began to rain a bit, car No. 7 (Studie BMW Z4) caught up with me, and so did the GAINER (No. 11 GAINER DIXCEL SLS) and the Prius (No. 31 OGT Panasonic PRIUS). In the end, the rain stopped after about two laps and I managed to hold on to the lead, but if the rain had continued for another two laps, the story might have been different. That is why I am relieved now with the way things turned out.”