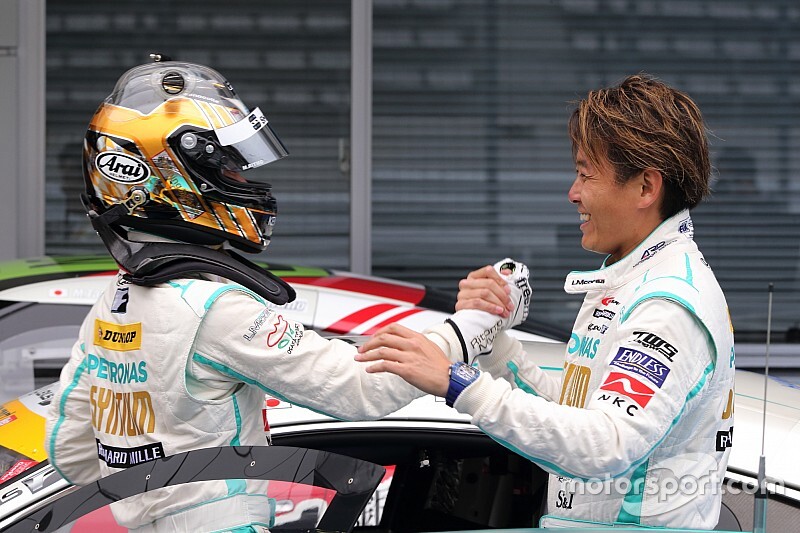 Toyota protege Miyata followed up his superb comeback drive in Saturday's opener with an altogether easier run to victory in the Lexus RC F GT3 he shared with Hiroki Yoshimoto.

As per the first race, Yoshimoto drove the opening stint, settling into second place as Ukyo Sasahara opened up a big advantage out front in the Bingo Racing Corvette C7 GT3-R.

Asian Formula 3 champion Sasahara was 13 seconds in the clear when he handed over to gentleman driver Shinji Takei at the end of lap 17 of 30, but Takei couldn't keep up the pace and was quickly reeled in by Miyata, who had already taken over from Yoshimoto.

Miyata made the inevitable pass for the lead at Advan corner on lap 19 and proceeded to open up a 15s second advantage at the head of the field in the remaining laps.

Five laps later, Takei surrendered second place at Turn 1 to the Saitama Toyopet Toyota Mark X MC of Shigekazu Wakisaka, who shared the car with Hiroki Yoshida, but Takei was able to hold on for the final place on the podium.

In its final appearance before being replaced by a new model for the 2020 season, Tsuchiya Engineering's Toyota 86 MC, shared by Kimiya Sato and Takamitsu Matsui, was eighth after picking up a penalty for failing to respect the minimum pitstop time.