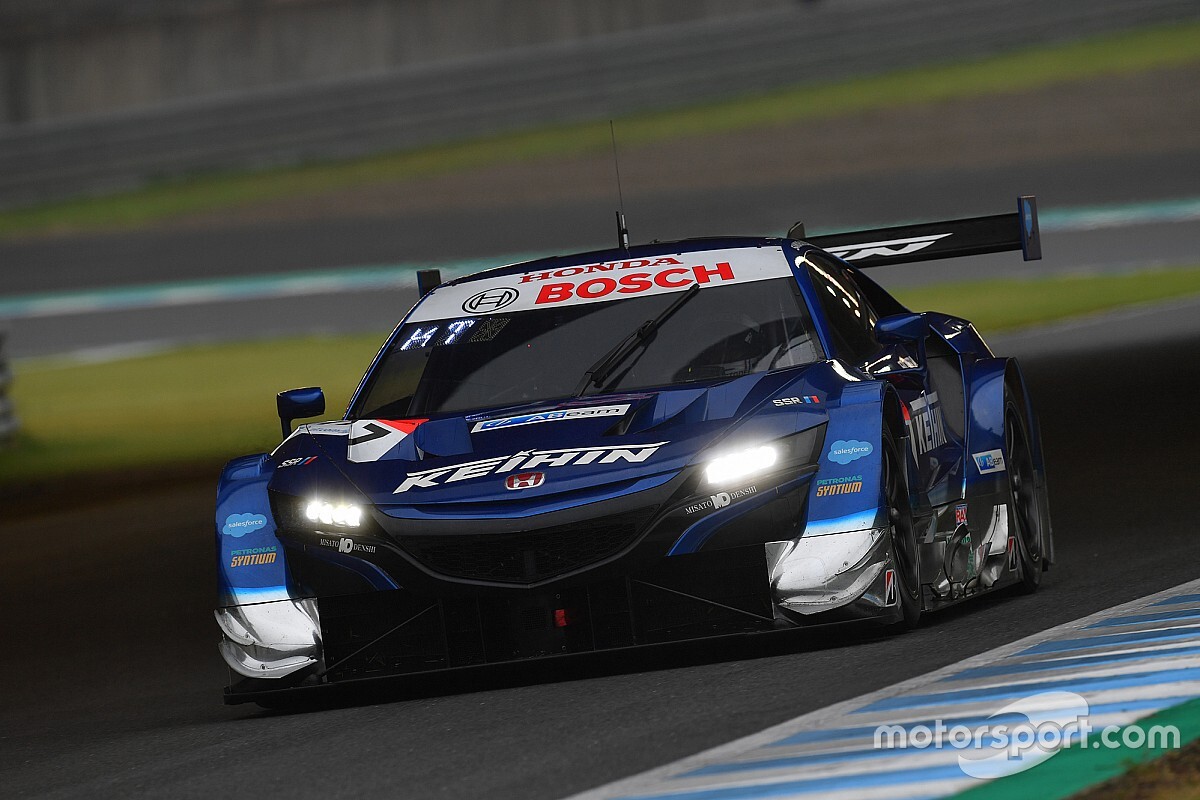 From second on the grid, Baguette laid the foundations for victory by passing the polesitting Cerumo Toyota of Yuji Tachikawa on lap eight of 63.

From there, he and Tsukakoshi survived two safety car restarts in the #17 Honda NSX-GT, overcoming their 46kg success handicap to take victory over the Cerumo car shared by Tachikawa and Ishiura by a comfortable 7.796 seconds.

It means Baguette and Tsukakoshi move into a two-point lead in the championship ahead of TOM'S Toyota drivers Yuhi Sekiguchi and Sacha Fenestraz.

Poleman Tachikawa led the opening laps in the #38 Toyota GR Supra but was unable to shake off Baguette and the #64 Nakajima Honda of Takuya Izawa, who formed a breakaway trio.

Baguette's opportunity to pass Tachikawa came when the pair encountered GT300 traffic at the hairpin, with the Belgian driver moving to the outside and then forcing his rival across the track on the exit to snatch the position.

Just two laps later the safety car was called for the first time as the #87 JLOC Lamborghini Huracan spun after apparent contact with the #8 ARTA Honda and crashed into the #19 Bandoh Toyota, which had been running a strong fifth, at Turn 9.

When action resumed on lap 15, Baguette built up an advantage over Tachikawa, as Izawa began to come under pressure from the chasing pack.

Baguette surrendered the lead on lap 25 when he pitted to hand over to Tsukakoshi, with Tachikawa coming in to give the Cerumo car to Hiroaki Ishiura two laps later.

Ishiura narrowly came out ahead but on cold tyres he was powerless to hold off Tsukakoshi, who quickly pulled out a gap and was almost 10s to the good when the safety car was called for a second time on lap 46 for debris.

That debris was the result of the two TOM'S Toyotas of Sekiguchi and Nick Cassidy making contact at Turn 5 as Cassidy attempted to pass up the inside.

The race resumed on lap 51, and Tsukakoshi was never seriously threatened on his way to the chequered flag, as Ishiura pocketed a first podium of 2020 for the #38 car in second. 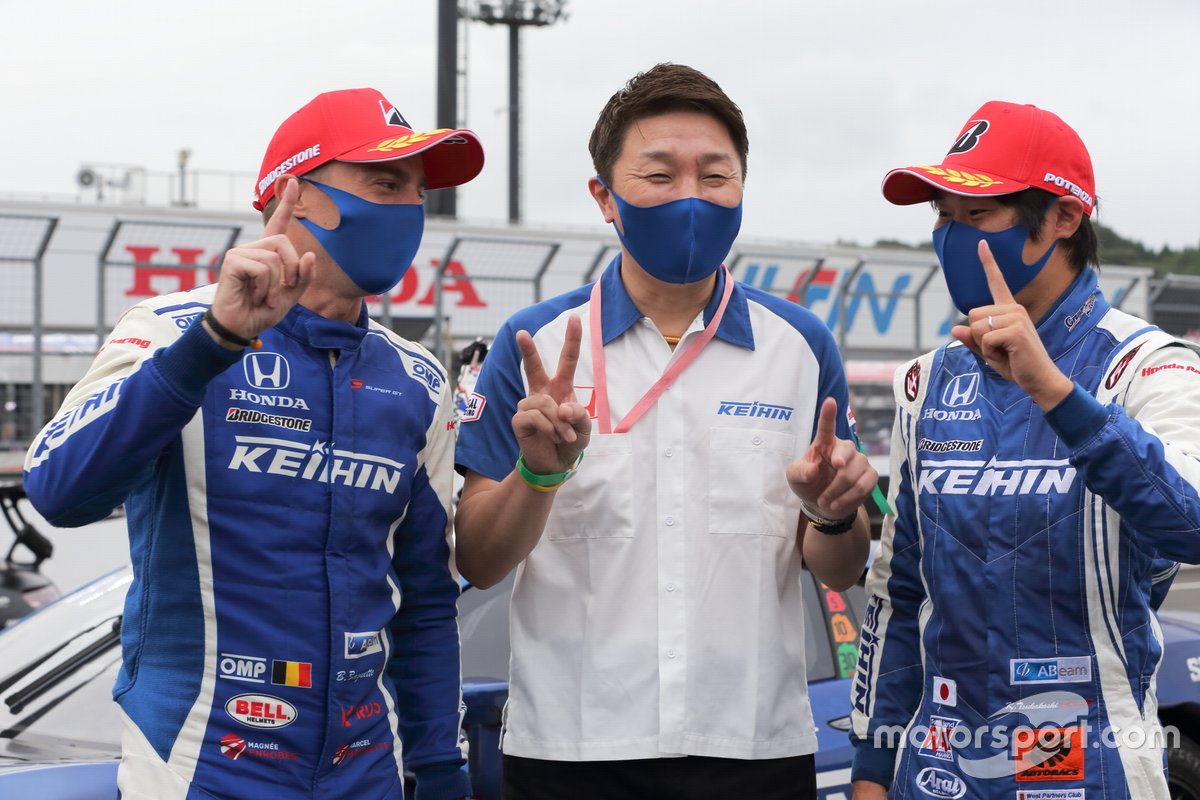 Third went to the #16 Mugen Honda of Hideki Mutoh and Ukyo Sasahara in by far the best showing of the season so far for a Yokohama-shod car.

Mutoh made a good start from seventh to run fourth by the time of the first safety car, and passed a struggling Izawa to grab the final podium spot thereafter - with GT500 rookie Sasahara maintaining the position through his stint.

As the Nakajima Honda dropped through the field, the #14 Cerumo Toyota of Kazuya Oshima and Sho Tsuboi rose to fourth despite its 48kg handicap.

Tsuboi had to resist late pressure from the #100 Kunimitsu Honda of Naoki Yamamoto in the closing stages, with Yamamoto and Tadasuke Makino taking fifth despite carrying an effective 52kg penalty, including a stage one fuel restrictor.

After a late charge, Cassidy came away with sixth in the #37 Toyota (carrying a 66kg handicap) he shares with Ryo Hirakawa, staying within five points of the championship lead - helped by Sekiguchi and Fenestraz's failure to score in 11th place.

Best of the Nissan GT-Rs was the NDDP/B-Max Racing car in seventh after a last-lap pass by Katsumasa Chiyo on the #23 NISMO machine of Tsugio Matsuda.

Completing the scorers were the SARD Toyota of Yuichi Nakayama and Heikki Kovalainen and the Nakajima Honda of Izawa and Hiroki Otsu, which made a second pitstop.

The #8 ARTA Honda of Nirei Fukuzumi and Tomoki Nojiri was again a non-finisher after being hit from behind by Jann Mardenborough in the #24 Kondo Racing Nissan at the hairpin.

In the GT300 class, Naoya Gamou and Togo Suganami came away with their first win since the 2018 Motegi season finale in the LEON Racing Mercedes-AMG GT3. 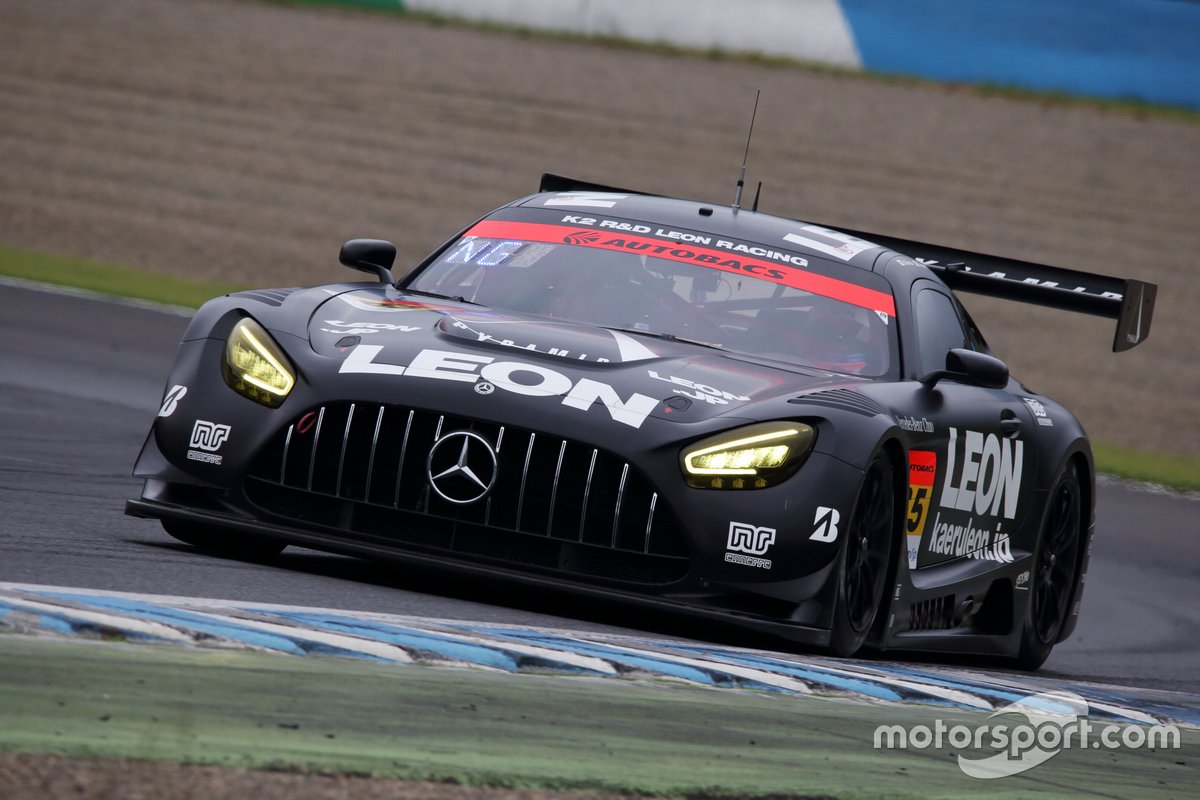 Saddled by 57kg of ballast, Suganami ran in the lower part of the top 10 early on before an early and quick fuel-only pitstop vaulted he and Gamou into an effective lead.

Most of the race was led by Takayuki Aoki in the Tomei Sports Nissan GT-R NISMO GT3, as Aoki left it late to hand over to teammate Yusaku Shibata for the second stint.

Shibata resumed in second and kept Gamou's Mercedes honest until hitting a problem with a handful of laps remaining and parking up at the side of the track.

That gave the runner-up spot to the surviving JLOC Lamborghini shared by ex-Honda GT500 man Takashi Kogure and Yuya Motojima, while the works Subaru BRZ of Takuto Iguchi and Hideki Yamauchi bagged the final podium spot.

The points-leading #11 Gainer Nissan, carrying the maximum 100kg handicap, came home seventh but was promoted one place by a 30-second post-race penalty for the Kondo Nissan that finished one place ahead of it in sixth.

Gamou and Suganami move up to second, one point behind the Gainer drivers, with Iguchi and Yamauchi six points adrift in third.