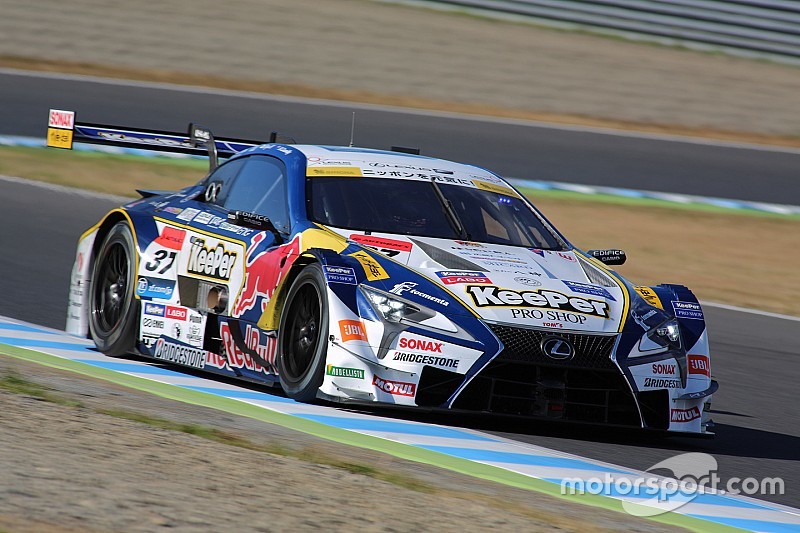 The #37 TOM’S Lexus duo of Nick Cassidy and Ryo Hirakawa clinched the 2017 Super GT championship after finishing second to the #23 Nissan in the final round of the season at Motegi.

Cassidy and Hirakawa only needed to finish in the top-two to claim the title, irrespective of how their rivals performed.

The Japanese-New Zealander duo qualified third on the grid and dispatched the sister #6 Lexus of Team LeMans on lap 4 to put themselves in a championship-winning position.

Although they were no match for the factory #23 Nissan of Ronnie Quintarelli and Tsugio Matsuda, a second place finish was enough to become the youngest Super GT champions.

Quintarelli and Matsuda finished second in the championship following their - and Nissan’s - first victory of the season, ending two points behind Cassidy and Hirakawa in the final standings.

The #23 GT-R led the race through its entirety from pole position, despite a scare on the formation lap when it made contact with the #6 LeMans Lexus.

The ‘red car’ shredded pieces of carbon fibre on the opening lap, but was able to continue the race without much troubles.

Honda was reduced to the third best manufacturer at its home turf, with the #17 Real Racing NSX of Koudai Tsukakoshi and Takashi Kogure the highest finishing Honda in fourth.

The Japanese duo were involved in a race-long scrap with the #100 Team Kunimitsu Honda of Naoki Yamamoto and Takuya Izawa, their battle settled only in the final part of the 53-lap contest.

The #46 Mola Nissan had a slow stop on lap 27, dropping Satoshi Motoyama and Katsumasa Chiyo from third to sixth.

James Rossiter, who had a remote chance of winning the title, made plenty of strides in the opening dozen laps, jumping from seventh to third.

However, suspension damage forced him to pit for lengthy repairs, leaving the #36 TOM’S he shares with Kazuki Nakajima out of contention for top honours.

Nobuteru Taniguchi and Tatsuya Kataoka claimed the GT300 class crown in the #4 Team Ukyo Mercedes, despite only finishing third in the race.

Kataoka led the first part of the race from pole position, but the outfit’s AMG GT3 slowed down briefly after the sole round of pitstops.

Taniguchi, who had taken over driving duties, managed to get going again and finished third, securing enough points to take the class title.

Up front, the battle for the lead went till the death end of the race, with the #65 Leon Mercedes overtaking the #55 ARTA BMW with just two laps remaining to take the win.

It was the second victory of the season for Haruki Kurosawa and Naoya Gamou, the Japanese pairing having previously won at the Suzuka 1000km.