Nissan had high hopes for SUPER GT's only visit of the season to Suzuka, but last weekend's podium lockout will have surpassed even the most ardent GT-R fan's wildest expectations. Jamie Klein looks at how it happened.

It wasn’t a great surprise to see the #23 NISMO Nissan win last weekend’s Suzuka SUPER GT race. After all, Ronnie Quintarelli and Tsugio Matsuda won on both of the series’ visits to the Japanese Grand Prix venue last year, and the pair were coming into the weekend with virtually no success ballast after a forgettable first three races of the season.

But what was more of a turn-up was the fact that Nissan crews ended up one, two and three on Sunday, as both the #3 NDDP/B-Max Racing and #24 Kondo Racing squads joined their more celebrated colleagues on the rostrum.

It was the first time since the 2014 Autopolis round that Nissan had achieved such a feat. But, back then, the GT-R was arguably the GT500 category’s dominant force, whereas now it’s largely been relegated to the role of bit-part player compared to the Honda NSX-GT and Toyota GR Supra.

The reason the GT-R performed so well at Suzuka last year but relatively poorly at the other two tracks that made up the COVID-affected 2020 schedule, Fuji Speedway at Motegi, can be summed up in a word: drag.

That, combined with an engine marginally less powerful than its Honda and Toyota counterparts, leaves the GT-R lacking the top speed needed to be a threat at Fuji and Motegi. But its downforce levels mean it’s reliably fast around Suzuka’s high-speed sweeps.

Indeed, Nissan COO Motohiro Matsumura offered a measured assessment of what this result means for the marque’s fortunes.

“Last year [the #23 car] won two races here, and we’ve produced a car that really suits Suzuka,” Matsumura told the official SUPER GT website. “Last year there were two races at Suzuka but four at Fuji, but we couldn’t win the title with this type of battle.

“Of course we don’t have four races at Suzuka, so we’ve learned the lesson that we have to make a car that’s strong at both types of track. So more than a ‘return to form’, I feel like each team prepared well and was able to do their race with a car that suits Suzuka.” 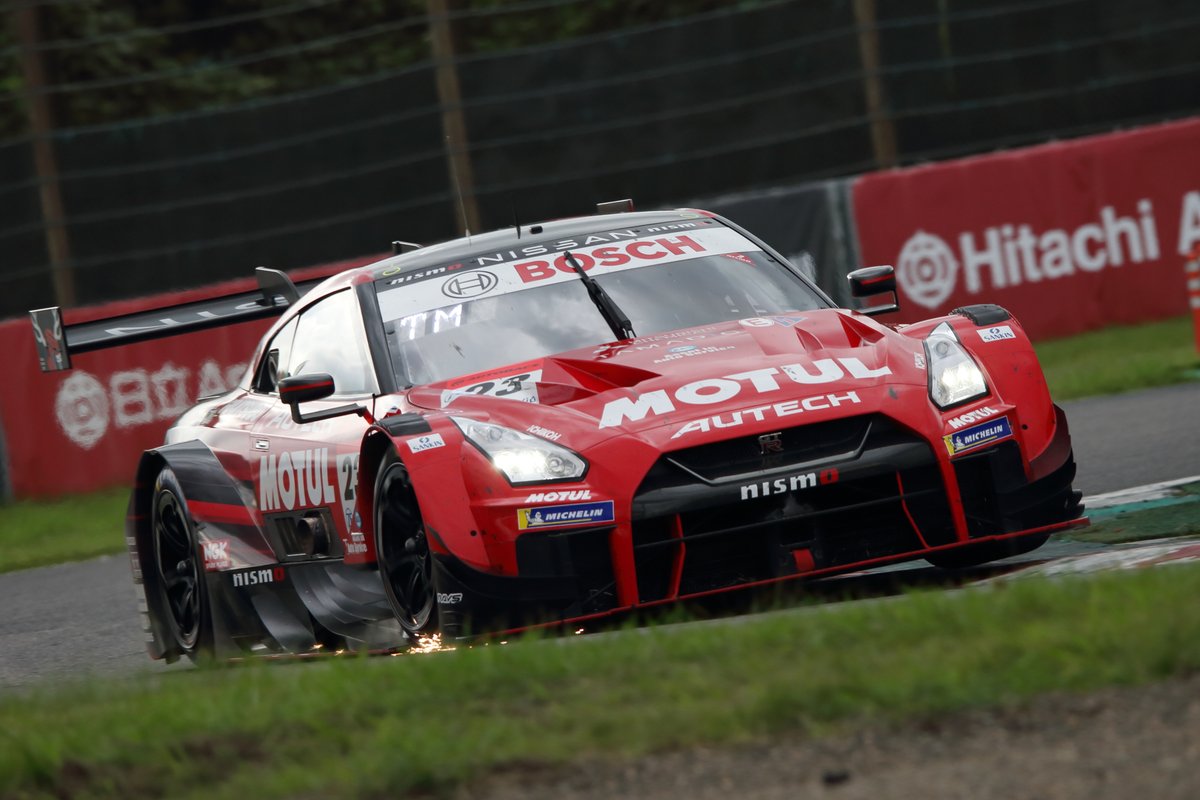 Besides the characteristics of the car, Michelin played the best hand of the four tyre manufacturers at Suzuka, playing a role in the success of the #23 and #3 Nissans.

Quintarelli was feeling bullish of his and Matsuda’s chances after qualifying third on Saturday, acknowledging that the one-lap pace of the two Dunlop-shod Hondas ahead of him was impossible to match but confident that race pace would be a different story.

And so it proved, as the Mugen NSX-GT that was left alone following the Nakajima Honda’s early crash tumbled down the order in the second part of the race, while both the Michelin-shod Nissans appeared to just get stronger as the 52-lap contest unfolded.

The Mugen Honda and NDDP/B-Max Nissan pitted together on lap 20, but – unseen by the TV cameras – Ukyo Sasahara in the Honda fell behind Kohei Hirate in the Nissan on what was the out lap for both cars, with Hirate’s Michelins switching on immediately while Sasahara scrabbled for grip.

Quintarelli left his stop until lap 24, meaning Matsuda had to battle his way back from fourth place to take the victory. He did so by passing Hirate at the hairpin on lap 41 of 52, helped by carrying less success ballast and Michelins that were four laps fresher. Hirate also admitted post-race he’d pushed too hard early in his stint, punishing his front-left tyre.

Despite losing out to Quintarelli and Matsuda, second for Hirate and Katsumasa Chiyo marked their first podium finish as a duo and the B-Max team’s first top-three since Hirate won at Sugo in 2019 alongside Frederic Makowiecki, continuing their improved run of form in 2021.

Chiyo, who moved up from seventh to fourth in the opening stint, recalled: “After the safety car restart [following the Nakajima Honda’s crash] I could see the lead car and I was pushing, but I told the pit wall [on the radio], ‘I can push from the out lap because of the tyre’s characteristics, so let’s pit earlier than normal’, and that went well.

“The short first stint made it quite difficult for Hirate, and we were passed by the #23, but we were able to finish on the podium, so it’s a positive result.” 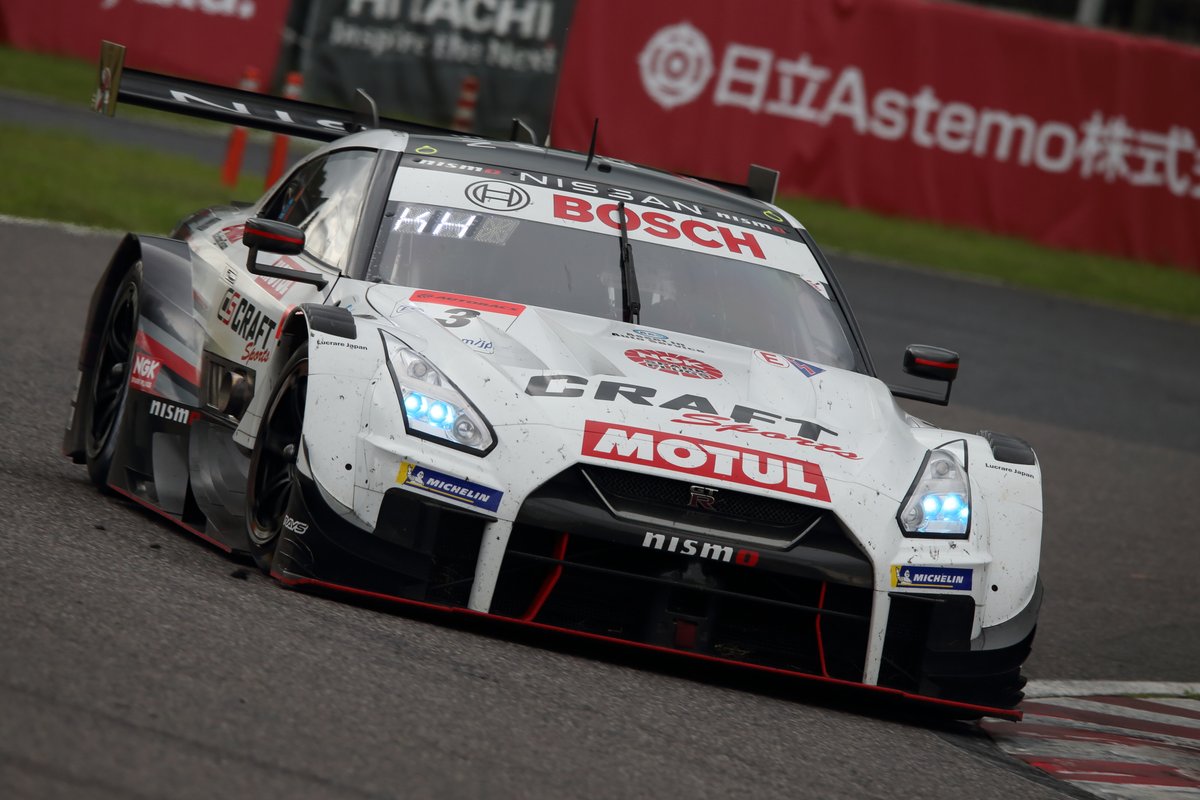 Considering Hirate and Chiyo were Nissan’s top finishers in each of the first three races, it wasn’t a huge shock to see them up there with the NISMO car. What was much more surprising was that Kondo pair Mitsunori Takaboshi and Daiki Sasaki brought home the #24 in third.

To put that achievement into context, the last time Kondo had a podium was when it won at Motegi way back in 2016, with Sasaki paired on that occasion with Masataka Yanagida. It was also Takaboshi’s first podium since his GT500 debut at Suzuka in the same year.

Sasaki took the opening stint and was actually the last GT500 driver to pit on lap 25, leaving the Kondo pair exposed to the undercut and Takaboshi with serious work to do to climb into the podium positions. But armed with a Yokohama tyre working well in the cooler-than-expected conditions, he had a surprisingly easy time picking off his competitors.

Key to this may have been the fact that track temperatures decreased by a few degrees during the race, as the cloud rolled in and even a few spots of rain fell at one stage.

“When it got hot, I couldn’t get as much grip as I expected, and that was one of my concerns before the race,” said Takaboshi. “But as the weather got cooler and spots of rain fell, the car’s potential improved and I’m glad I could show my performance at that time.”

Indeed, with a handful of laps to go it looked as if Naoki Yamamoto’s Kunimitsu Honda might catch up and spoil the Nissan party, but Takaboshi held firm and actually increased the gap in the final few laps to around five seconds at the chequered flag. 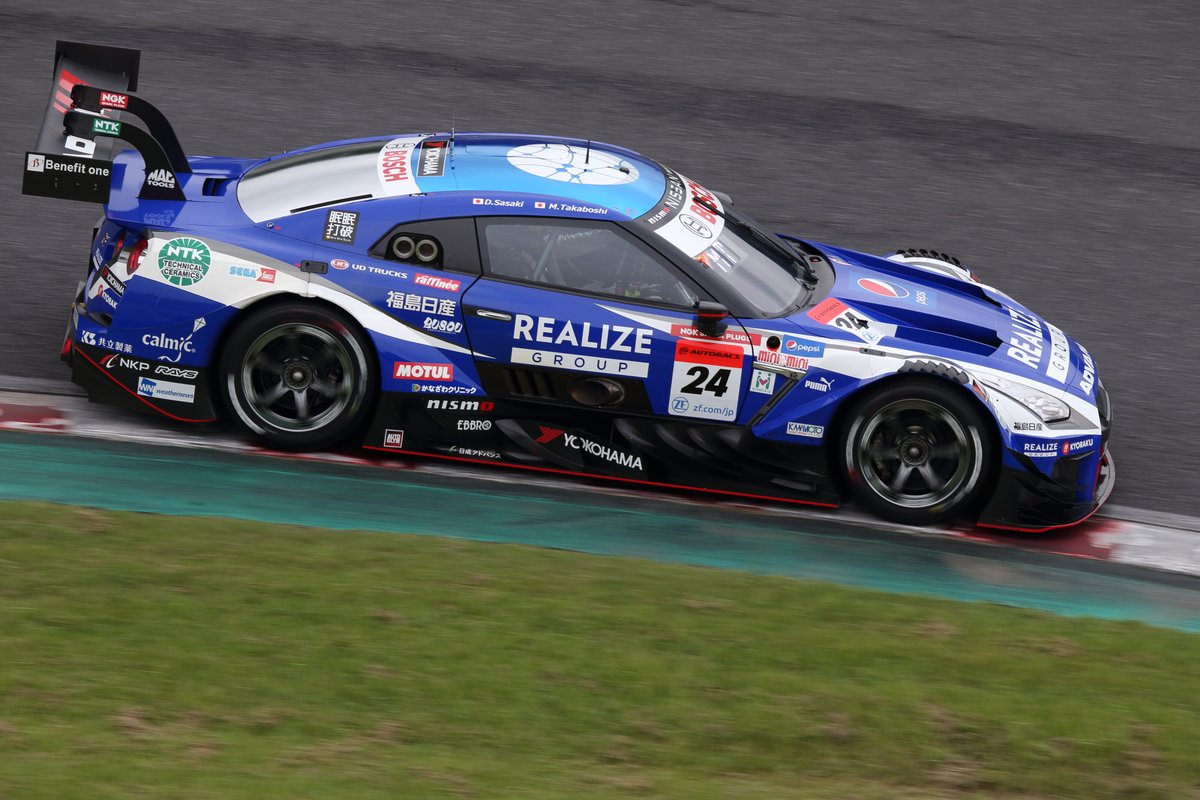 If there was any disappointment for Nissan, it was the performance of the Impul GT-R shared by Hiramine and Nobuharu Matsushita, which ran second behind the #3 car after going for an early pitstop but later slipped down the order to sixth.

The only car running on Bridgestones of the four Nissans, Matsushita revealed to Motorsport.com that Hiramine was using the same compound as Yamamoto during his stint, but that the #12 car was cooking its rear tyres for reasons that aren’t currently clear.

“Kazuki was in a good situation because we did the undercut [pitting on lap 18] and we were P2, I was expecting good laptimes from him, because we had a different compound [to the first stint],” said Matsushita. “I used softer one, he had a stiffer one.

“I expected the degradation to be quite low, but the problem was not degradation. We were one second off the other Nissans. We had no grip at the rear.

“Car #1 [Yamamoto] had the same compound and was much faster than us. So clearly something was wrong. I don’t know it it’s something with the set-up, or tyre pressures… we are still investigating the cause.” 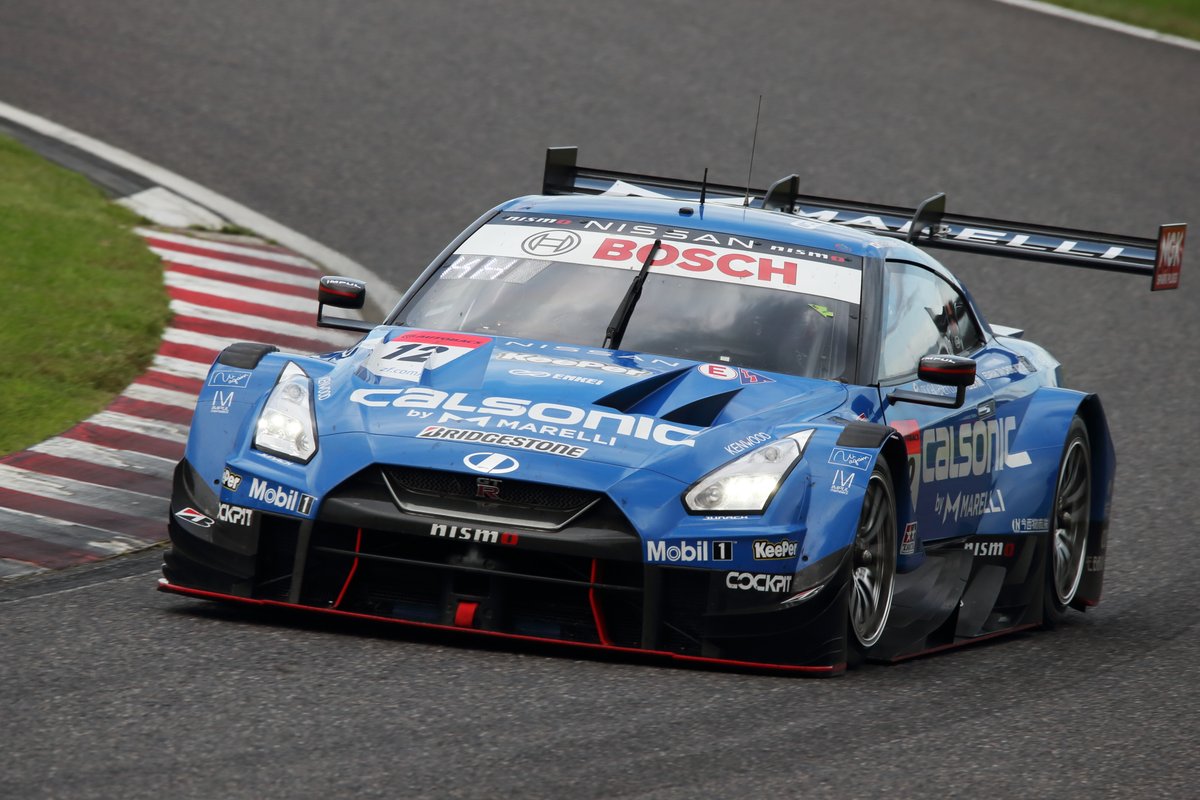 So, what can we expect of the Nissan contingent at the next round at Sugo? Hirate and Chiyo’s #3 car will be carrying a stage-one fuel flow restrictor thanks to their points haul, while Quintarelli and Matsuda’s #23 machine will be laden with 44kg of ballast, so on the face of it a repeat of the marque’s Suzuka performance seems unlikely.

But, the track is definitely more on the Suzuka end of the scale in terms of downforce requirements, with hardly any long straights worth mentioning. Both Kondo (22kg) and Impul (16kg) remain relatively light, while Hirate and the B-Max team will also be boosted by their memories of winning at Sugo two years ago.

“The second half of the season has a lot of ‘cornering’ circuits, and that’s what we’re good at,” said Matsumura, before cautioning: “But we haven’t raced at Sugo and Autopolis last year, so we don’t have data [with the current GT-R], but we’ll give it our all.”

Quintarelli, who is aiming for an unprecedented fifth GT500 championship crown this year, added: “At Sugo we won’t have a fuel restrictor, so I think we can fight. [The following race at] Autopolis will be the last race where we have to recover from the success ballast, but last year we won the sixth race of the year at Suzuka and closed the gap in the standings.

“Anyway, for Sugo and Autopolis we’ll put together a solid strategy, and when Autopolis is over, we’ll prepare to be able to compete [for the title] in the final two races [at Motegi and Fuji].”

The winners and losers of the SUPER GT season so far