Pacific Ferrari "felt like a GT500 car" during Motegi surge

The Pacific CarGuy Racing Ferrari was so quick in the first part of last weekend's Motegi SUPER GT round that it "felt like a GT500 car", according to Kei Cozzolino.

For the third time this season, Italian-Japanese driver Cozzolino was joined at the cockpit of Pacific's #9 488 GT3 Evo by sometime GT300 champion Naoki Yokomizo, with his regular teammate Takeshi Kimura away on FIA World Endurance Championship duty in Bahrain.

The weekend started well as Cozzolino topped practice, but Yokomizo failed to make it out of the first part of qualifying, leaving the pair starting down in 21st on the grid in the GT300 class.

Cozzolino took the start and quickly carved his way through the order, and was up to seventh place in class by the time the pitstop phase began, and even led for a phase before making a late pitstop.

Yokomizo was on course to bring the sole Ferrari in the SUPER GT field home for at least a top-six result before the team's race was ended by a left-rear puncture.

"The car was amazing this weekend, it was the first time in my career I’ve had a perfect race car," Cozzolino told Motorsport.com. "Yokohama brought a different structure of tyre for this race, which were really good, and compared to the other GT3 cars the Ferrari is very kind on its tyres.

"[Yokomizo] did really well in the last two races, and so I was sure that even if he made some mistakes on his flying lap, he would pass Q1 because the car was working so well.

"I think the problem is that he was too careful with warming up his tyres, and he didn’t get the tyres to temperature on the first attack lap. He was improving on the second attack lap, he was up by 0.4s, but then he got stuck in traffic, so that’s where it all went to hell.

"In the race we decided I would do the start because I was very confident I could overtake a lot of cars. The car was flying… it felt like I was in a GT500 car. Finally I think I overtook 14 cars, it was one of the best ‘overtaking shows’ of my career. It was ridiculous!

"During the pitstop the engine didn’t start, so we lost six or seven seconds. We were P7 at that point, but if the engine started normally, we could have been P4. Naoki overtook the [#25 Hoppy] Porsche and we were in P6, close behind the third-, fourth- and fifth-placed cars, and all of a sudden the rear-left tyre blew up.

"There was no prior warning that the tyre was about to blow up. We need to analyse to find out exactly what happened, maybe Naoki ran over some debris or something. It’s a pity." 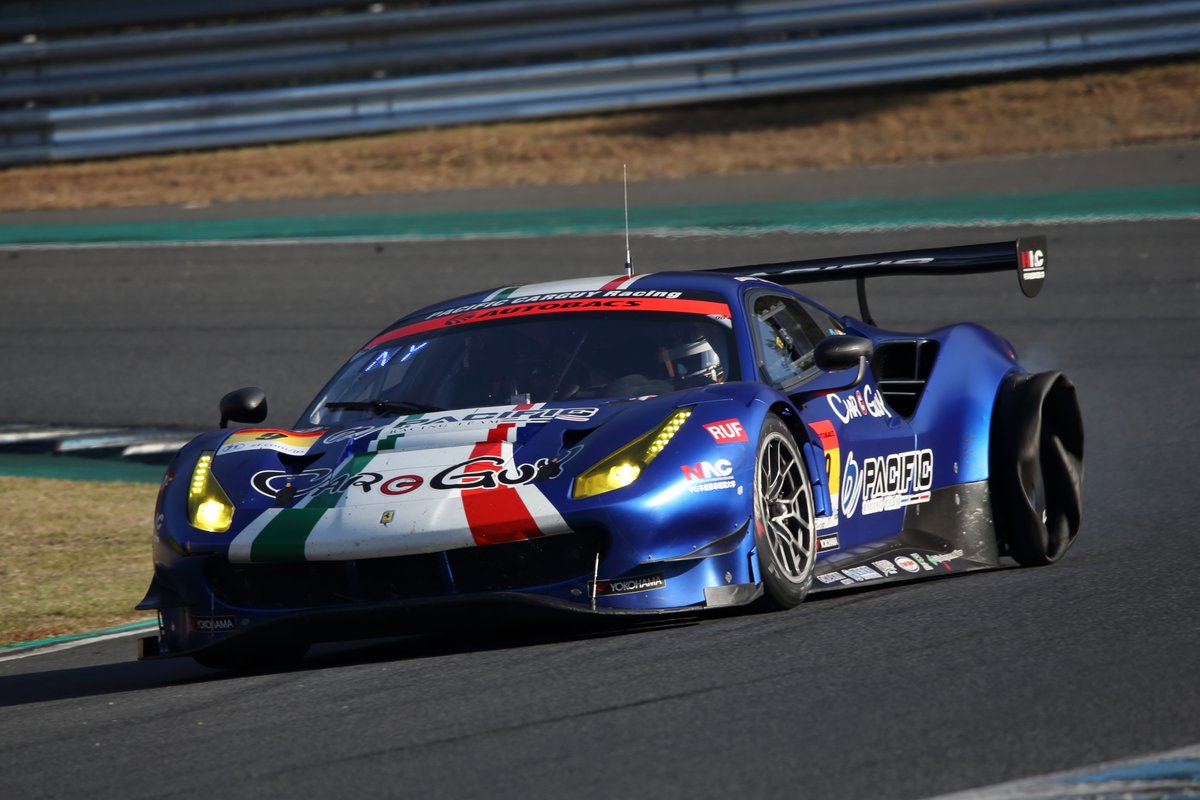 With Kimura due to return to the Pacific CarGuy squad for this month's Fuji Speedway finale, and the 488 GT3 traditionally not one of the quickest cars in a straight line, Cozzolino doubts the team will be able to have a similarly strong showing.

"If we can qualify in the top five or six, we have the chance to be up there," he said. "But when you qualify P16, P17, at Fuji, even if you are faster in sector two, sector three, you will lose all of that time on the straights. That’s our weak point.

"If we can be up there with the GT-Rs and the Supras and have their slipstream, we have a chance, but if you are stuck in the mid-to-lower rankings, it’s pretty much impossible to make progress.

"Kimura-san will be back, hopefully he can qualify well. The car now is much better than it was at Fuji for Round 2 and the tyres are much better, so we’ll see how it goes."