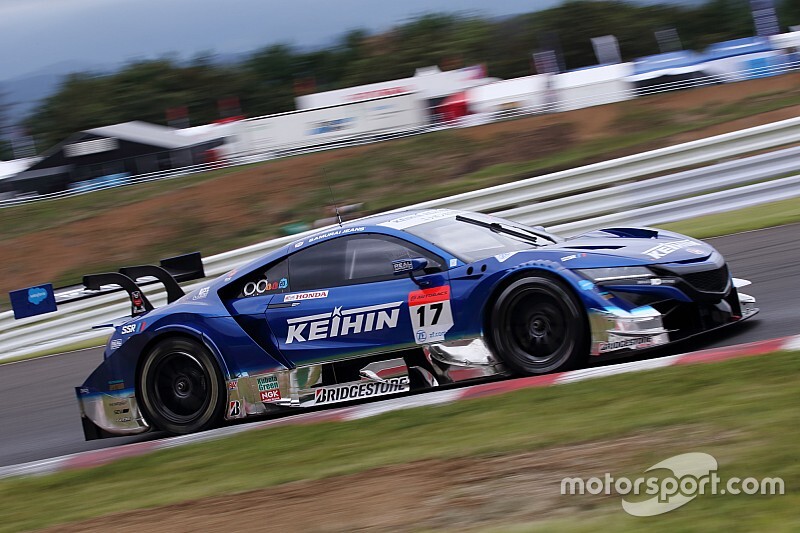 Having topped practice on Saturday morning, the Honda squad lowered the previous lap record by over half a second to take pole position for the penultimate round of the season.

Baguette safely navigated the #17 NSX-GT to the second part of qualifying, before Tsukakoshi posted a time of 1m09.676s on his late flyer.

That put the Real duo comfortably clear of the Kunimitsu Honda of Jenson Button and Naoki Yamamoto, which won last year’s race from pole position and held the circuit’s previous lap record.

Q1 pacesetters Kazuki Nakajima and Yuhi Sekiguchi will start third in the #36 TOM’S Lexus, but will have to serve a 10-second stop/go penalty in the race for exceeding the allocation of two engines per season.

Nakajima Honda duo Narain Karthikeyan and Tadasuke Makino enjoyed their best qualifying result of the season in sixth with a time of 1m10.799s.

B-Max pair Kohei Hirate and Frederic Makowiecki were seventh quickest in the only Nissan that made it to Q2, while championship leaders Kenta Yamashita and Kazuya Oshima (LeMans Lexus) completed the top eight.

Tomoki Nojiri and Takuya Izawa will line up ninth in the ARTA Honda, ahead of the factory-entered NISMO GT-R of Ronnie Quintarelli and Tsugio Matsuda.

Matsuda had to abort his final flyer after being struck behind the Cerumo Lexus of Hiroaki Ishiura and Yuji Tachikawa, which eventually qualified just one place behind in 11th.

The factory-supported Subaru R&D team took pole position in the GT300 class, ahead of the championship-leading ARTA Honda.

Driving the #61 BRZ, Takuto Iguchi and Hideki Yamauchi broke the class lap record with a time of 1m16.834s, beating the points-leading #55 NSX GT3 of Nirei Fukuzumi and Shinichi Takagi by over three tenths of a second.

What happened to Honda's other title contenders at Fuji?