The Okayama GT 250km Race, Round 1 of the 2011 AUTOBACS SUPER GT, took place at the Okayama International Circuit (one lap 3.703 km x 82 laps) in Okayama Pref. on May 22nd. The GT500 class winner was the 2nd position-starting CALSONIC IMPUL GT-R driven by Tsugio Matsuda and Joao Paulo Lima de Oliveira to a come-from-behind victory.

Heavy rain in the morning caused the free practices session to be cancelled at Okayama Circuit. However, the rain stopped before noon and the track surface dried off to enable the race to begin in dry conditions.

The race started as scheduled at 14:00. In the early stages of the race the pole-starting KEIHIN HSV-010 (Toshihiro Kaneishi) and 2nd-position starter, the CALSONIC IMPUL GT-R (Oliveira), gradually opened up a lead over the rest of the field to battle one-on-one.

It feels great to win like this as the result of everyone’s efforts.

The gap between the two lead machines remained between two and three seconds, and what finally broke the stalemate was the pit stop. First it was the leading KEIHIN HSV-010 that returned to the pit at the end of lap 29. Seeing that, the CALSONIC pit immediately called Oliveira to bring the GT-R back to the pit on the next lap. Then, with fast pit work the CALSONIC IMPUL GT-R was able to return to the track in front of the KEIHIN HSV-010.

The CALSONIC IMPUL GT-R was now in the lead with Tsugio Matsuda at the wheel, but it was being chased hard by a gaining Koudai Tsukakoshi in the KEIHIN HSV-010. The 24-year-young Tsukakoshi was pulling up on the rear of the lead GT-R, but its veteran driver Matsuda was skillfully blocking him to make things difficult. Perhaps being too anxious, Tsukakoshi bumped the GT-R and sent both machines into a spin. Tsukakoshi was the quicker to recover from the spin and take the lead, but he would be given a penalty for the collision. This gave the CALSONIC IMPUL GT-R an easy lead that enabled Matsuda to race on to victory.

For the Nissan GT-R this is the second consecutive win of the season, following a victory at the opening round at Fuji Speedway. It is the 30thvictory in all for the GT-R (including the Skyline GT-R) in SUPER GT and its predecessor the All Japan GT Championship. 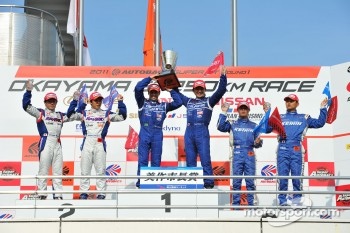 Because of the Great East Japan Earthquake, the Okayama Race originally scheduled for April 3rd as round one of the season, had to be postponed to this date after the Fuji Speedway round two held on May 1st. Also the race distance was reduced from 300 to 250 km.

In the GT300 class, the triple a Vantage GT2 driven by Hiroki Yoshimoto and Kazuki Hoshino came from 2nd position on the starting grid to pass the pole-sitting Ferrari and claim the team’s first GT victory. This was also the first SUPER GT victory for the British Aston Martin Vantage.

Tsugio Matsuda: “We missed getting the win at the season opener at Fuji Speedway, so I was determined to finish among the leaders and take home some big points this time no matter what. In yesterday’s qualifying, car No. 17 (KEIHIN HSV) was much faster than anyone else and, to be honest, I thought it would be hard to get in front of them. But JP [teammate Joao Paulo Lima de Oliveira] came back to the pit in 2nd position and the team did a super job to get me back on the track in 1st position. It feels great to win like this as the result of everyone’s efforts.”

Joao Paulo Lima de Oliveira: “In the last round at Fuji it was my mistake that ended the race for us and kept us from getting even a single point. To be able to come back in the very next race and win makes me very happy. In the early running I did my best to stay with car No. 17, and after it pulled into the pit and I had clear track ahead of me. I pushed as hard as I could. The next race is at Sepang, which is a course that I like very much. Having won here, I will be able to go to Malaysia with a lot of motivation.” 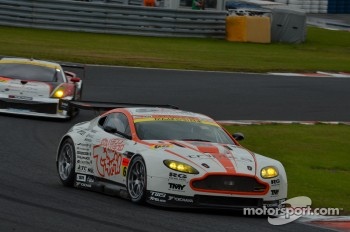 Hiroki Yoshimoto: In the season opener we lost everything because I pushed too hard, so I was definitely looking for revenge this time. We knew we were fast after running at Fuji, so I was confident this time. At the start of race week the machine condition was not good, but it improved with every run. It was as if the times were improving at exactly the pace we need to get us to the win here today. I think there was a scene [on the race screen] that looked as if I had spun out by myself, but actually I was hit by another car. Kazuki [teammate Hoshino] was saying that it was his goal to get one win this season, but the real goal is to get two wins this season, so I won’t be holding back anything at Sepang. I will be racing all out.”

Kazuki Hoshino: “First of all, I want to dedicate this win to the victims of the earthquake and tsunami. In te off-season I didn’t know if I was going to have a seat to race in this season, but then the team asked me to join and now we have won a race in just the second time out. So, I am very happy. I want to say thanks to the team. At the start of the season I had a very strong desire for us to get one win somehow. Now that that wish has been granted I honestly have no more goals in mind at the moment. I am going to get a good night’s sleep tonight and then think about it [the next goal].”