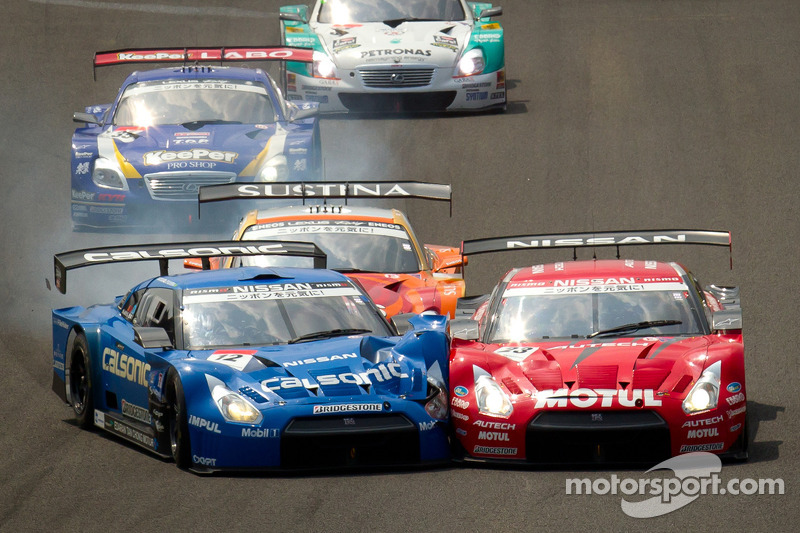 Super GT is one of the major motorsport categories in Japan with an official FIA affi liation as an international race series. Two classes are racing together: the GT500 class for cars with more than 500 hp and a wide range of modifications and the GT300 class for race-oriented production sports cars and mass-production cars modified for racing.

Having these two classes run together in the same race ensures that there are plenty of machines on the track and always exciting overtaking scenes to watch.

Machines from Japan’s three leading car manufacturers are competing in GT500, Super GT’s premier category. Teams are competing in the championship with the cars that are developed by the manufacturers, who are also providing technical support. The GT300 class is open for cars to JAF GT and FIA GT3 regulations.

As a result, the field in this class not only includes cars from four Japanese manufacturers, but also from an impressive array of foreign manufacturers with European and American GT cars.

Each car is driven by two drivers (except for the long distance races) which makes one pit stop mandatory for the driver change. Pit stops also involve refueling and other operations that test the skills of the mechanics and crew and add another factor that can influence the race outcome.

Teams win championship points based on their race results, but they are also levied handicap weights in proportion with the points they win. This means that the stronger teams scoring a lot of points must have the strength to overcome even higher hurdles. The handicaps also reduce the chance of domination by a few teams and make competition more intense and exciting.

An elite roster of competitors including Japan’s top drivers and a host of racing stars from abroad with international race credentials are competing in Super GT while many of the team directors are famed drivers from the past. Current drivers include former Super GT champions Juichi Wakisaka, Takashi Kogure, Satoshi Motoyama and Masataka Yanagida, plus ex-F1 driver Kazuki Nakajima. Among the team directors are Le Mans winner Masanori Sekiya and ex-F1 drivers Toranosuke Takagi, Satoru Nakajima and Aguri Suzuki.

The direct predecessor of Super GT was the Japan GT Championship (JGTC). For its inaugural season in 1994, the series had 18 cars on the grid. The first ‘All-Star race,’ with competitors chosen by fan voting, was held in 1996. In 2000, the series had an important milestone as the first overseas race took place in Sepang, Malaysia. An exhibition race was held at California Speedway in the U.S. in 2004.

One year later, the series was renamed Super GT with FIA affi liation as an international race series. In 2006, the Suzuka 1000km, the longest continuing race in Japan, became a part of the Super GT series. Addition of the Fuji Sprint Cup in 2010 and an exhibition race in the Republic of Korea in May, 2013, were other major achievements.

For 2014, the GT500 class unifi es its technical regulations with those of the DTM. This will make it easier for German cars from Audi, BMW and Mercedes-Benz to compete and make Super GT even more exciting.