The FUJI GT 400km RACE, Round 2 of the 2011 AUTOBACS SUPER GT series, took place at Fuji Speedway (one lap 4.563 km x 66 laps) in Shizuoka Pref. on May 1. The come-from-behind winner in the GT500 class was the 6th-place qualifying MOTUL AUTECH GT-R driven by Satoshi Motoyama and Benoit Treluyer.

I want to dedicate this victory to all the people who have suffered from the earthquake and tsunami.

This race was scheduled as the second round of the 2011 series, but the first round at Okayama originally scheduled for April 3rd was postponement because of the Great East Japan Earthquake disaster, it effectively became the season opener. Also, the race distance was shortened from the originally planned 400 km to 300 km.

The race started under the worst of conditions with heavy rain and strong winds, which meant that everything hinged on the teams’ choice of tires. Bad tire choices by a number of teams, including the pole-sitting (first qualifying) DENSO SARD SC430, and spin-outs in the wet conditions hampered one team after another. One driver who seemed to be unaffected by these bad conditions was Benoit Treluyer, who started from 6th position on the grid in the MOTUL AUTECH GT-R. In the early stages of the race he moved up steadily to take the lead.

Before returning to the pit and turning the wheel over to teammate Motoyama, Treluyer managed to build up a lead of 16 seconds over the 2nd-place machine. Motoyama continued to stay in control in the lead during his stint until the rain increased in fury with about 10 laps remaining in the race. Judging the conditions to be too dangerous to continue the race, the officials stopped the competition with six laps remaining. Eventually, that signaled the end of the race and the finishing order was that at end of the 59th lap. This gave the MOTUL AUTECH GT-R team the first win of the season. 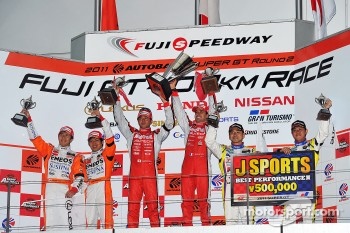 This victory extended Motoyama’s record of most wins for a driver in the GT500 class to 13.

The GT300 class race became an impressive runaway victory for the pole-starting HANKOOK PORSCHE driven by Masami Kageyama and Tomonobu Fujii. The team’s Hankook tires fit the track conditions perfectly and enabled the drivers to build a 30-second lead over the field by the end of the race.

Satoshi Motoyama: “I am tremendously happy. We didn’t get any wins last year and the last couple of seasons have been tough ones for our team, so we feel determined to do well this season. I didn’t expect us to win the opening round and today’s conditions were very difficult, but we thought that might give us a chance. In the first half of the race Benoit did a great job, driving magnificently to get in front and give us a big margin of lead. He raced intelligently to overcome the bad conditions. [During my stint] the conditions weren’t that bad at first but in the final stages the rain got worse and I started hydroplaning. We hadn’t changed tires during the pit stop, so they were getting worse and I nearly spun out several times. It was hard just to keep the machine on the track. I believe it was the right decision for the officials to stop the race when they did. I want to thank Nissan for giving us a winning opportunity and everyone on the team, the engine and tire staff and my wonderful teammate Benoit.”

Benoit Treluyer: “I am truly happy! It was a very difficult weekend. With the terrible earthquake and the long interval without racing, it was hard to get back into the competitive mode. Also, returning to Bridgestone tires after a year with another maker we didn’t have much time for tests and that left some uncertainties in the machine set-up. Still, everything went very well during the race and I felt good at the start. During Satoshi’s stint the rain got worse and I’m sure the conditions were bad. But, the great driver he is, he ran very well. I want to dedicate this victory to all the people who have suffered from the earthquake and tsunami.” 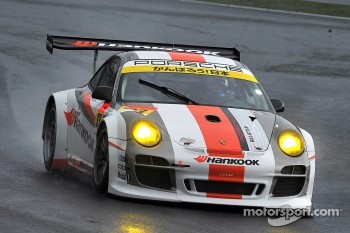 Masami Kageyama: “First of all I would like to send my condolences to all who have suffered in the Eastern Japan Earthquake and Tsunami and to thank all the people who worked to make this race possible. Tomorrow is my birthday, so I want to make this victory a present to myself, too (laughs). We owe this victory to Hankook (Tire), the team, Fujii-san who drove so well in these difficult conditions, all the fans who came out in the rain to cheer us on and Mitsuru Kinoshita-san who worked on the tire development with us last year. Before the start we had a very hard time deciding what tires to use, but our decision to go with wet tires was the right one. It was a good decision by the team. Another reason for this win was the fact that we didn’t make any mistakes. The 2nd-place finisher was a team that had recovered from a spin and a penalty, so the fact that we were able to race at a high level without any mistakes makes this not only my victory but a victory by the whole team.”

Tomonobu Fujii: “By running fast in the qualifying and winning the race in these tough conditions, I feel that I have been able to pay back all the people of the team and the people at Hankook who got us here. Today the conditions were so bad that I wished I didn’t have to drive, but watching Kageyama-san build a lead and hold off on making the pit stop in those uncertain conditions filled me with admiration. Honestly, I really didn’t want to go out there and drive today, so I’m glad I was able to make it back with no mishaps (laughs). But, since the tire choice and the machine setting were good, I was able to drive with confidence. But, when I saw the GT500 machines start hydroplaning I realized how dangerous it was out there. So, I’m glad I was able to finish the race successfully.”