Weider HSV-010 team takes its first win of the season

The SUPER GT INTERNATIONAL SERIES MALAYSIA race, Round 3 of the 2011 AUTOBACS SUPER GT, was held at the Sepang International Circuit (lap 5.542 km x 46 laps) in Malaysia (on June 19). The GT500 class winner was the pole-starting Weider HSV-010 driven by Takashi Kogure and Loic Duval.

To avoid Malaysia’s midday tropical heat in, the race start was scheduled for 16:00 (local time) in the late afternoon. Starting from the pole position (1st position on the grid), the Weider HSV-010 driven by Loic Duval gradually opened up a lead of the 2nd-place S Road MOLA GT-R (Ronnie Quintarelli). When Duval began to encounter GT300 class back-markers and lose time in passing them, the S Road MOLA GT-R closed in on his tail at one point. However, with its faster pace when running alone, the Weider HSV-010 (Duval) was able to maintain its lead all the way to the routine pit stop. Then the wheel was turned over to Takashi Kogure. 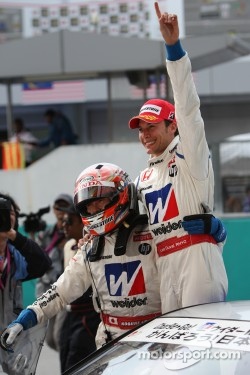 Next, the S Road MOLA GT-R made its pit stop. After quick pit work the team sent the GT-R back into the race with Masataka Yanagida in the driver’s seat. From the pit exit Yanagida got out on the track in front of Kogure. At this point, however, Kogure was obviously running at a faster pace and he managed to take back the lead on the second turn of that lap. After that, Kogure never let anyone get close to him as he built up an impressive 14-second lead by the time he took the checkered to win the race. Despite being last season’s GT champions, the Weider HSV-010 had not been able to come through with good results in either of the first two rounds of this season. Round three here at Sepang finally gave them their first win of the season.

This represented the fourth win for the Honda HSV-010GT since its debut last season. For Kogure this is his fifth career GT win, and for Duval it is his fourth.

Takashi Kogure: “The car’s performance has been good this season but we just weren’t able to get a good result until now. I am relieved that we finally were able to win. Sepang has a slippery track surface and it was hard on the tires too, but I think we were able to run consistently fast. I was surprised when car No. 46 came out of the pit exit in front of me, because I hadn’t anticipated it. But, since it was its “out lap” (first lap out of the pit), I decided I had to make my move quickly [before its tires warmed up]. I saw a chance on the second turn and made my move past it then. I was able to build up a gap of 17 seconds over the cars behind me, but the wear on the tires was considerable, so I took it easy at the end.”

Loic Duval: “The win this time finally puts us in the series title race. Now the season is just beginning for us, I feel. In fact that my lap times fell at one point was because I came up behind a group of GT300 back-markers that were batting with each other and that created a situation where I didn’t have a chance to pass. In contrast, the car behind me was able to pass them right away, so I was like, “OK, I’m waiting for you!” (wry smile.) After that I was able to open up a margin of lead again though. Still, it was a tough race.” 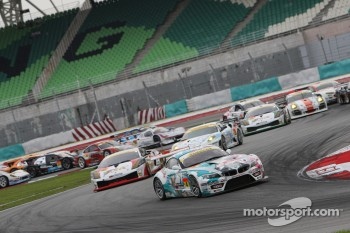 Nobuteru Taniguchi: “After winning the class pole position yesterday I really wanted to win today. In the race today, things developed ideally just as I had hoped they would, and I was happy when we took the checkered. But, in the second half it was different [as the competitors closed the gap on Bamba] (wry smile). I was so nervous watching Bamba’s stint that I think it took a couple years off my life! And I even got a little upset. But I think Bamba did a good job for us out there.”

Taku Bamba: “I am so happy. But I am also a little disappointed in my performance. Also, I want to dedicate this victory to the sponsors who have supported us for so long, and to everyone at my meny personal sponsors. The plan was that Taniguchi-san was going to go out and get us a big lead and then I was going to maintain it to the win. But I ended up losing the margin of lead. I lost time while I was being passed by the GT500 cars. Next time I want to show everyone that I can run as planned.”