On July 30, the qualifying for the “SUGO GT 250km RACE,” Round 4 of the 2011 AUTOBACS SUPER GT, took place at Sportsland SUGO (one lap: 3.704 km) in Miyagi Prefecture. In the GT500 class, the S Road MOLA GT-R driven by Ronnie Quintarelli won pole position and will start from the front position in the race on the 31st.

Sportsland SUGO is located in Miyagi prefecture, which one of the hardest hit regions in March’s Great East Japan Earthquake. Although the circuit itself suffered little damage in the earthquake, the SUGO facility was used as a staging point for material aid to the stricken regions for a period afterwards due to its proximity to Murata Exit of the Tohoku Expressway and other factors.

I don’t know what the weather will be like for tomorrow’s race...

The qualifying on the first day of the SUPER GT event was unfortunately hampered by rain. Intermittent squalls of hard-driven rain made for very difficult conditions for the teams to run their timed laps. When the first qualifying session started at 12:25 there was a lull in the rain and the track had dried out considerably. In this session the 2nd-place finisher at the last round at Sepang, the S Road MOLA GT-R continued its hot streak. Ronnie Quintarelli scored the fastest time with a 1’ 16.145 lap.

When it came time for the ensuing GT500 class Super Lap run one machine at a time to decide the top ten grip positions for Sunday’s race, however, there was a hard rain falling. Still, the conditions were somewhat better in the early stages of the session, so when it came time for the S Road MOLA GT-R to make its “time attack,” the fastest lap up to that point was still the 1’28.601 recorded by the DENSO SARD SC430 (Hiroaki Ishiura), which had been the second runner in the Super Lap after qualifying 9th in the first session. Ishiura had been the only one able to break the 1’30 barrier, and with the rain falling harder now, it looked as if his time was unassailable. But then, Quintarelli stepped up to deliver a veritable “super lap.” Skillfully handling his machine as it slid around each corner, he stormed to a brilliant 1’26.355! In the SUPER GT qualifying known for its close fraction-of-a-second battles, he had managed to outrun the next fastest machine by more than two seconds.

In the GT300 class, the ARTA Garaiya driven by Shinichi Takagi took pole position. For the Garaiya it was its ninth pole position, and for Takagi his sixth personal PP, while for Bridgestone tire, returning to GT300 competition this year, it was the first PP since 1996 and only its second overall.

Ronnie Quintarelli: “Watching the machines that ran the Super Lap before me I could see that there was a lot of water on the track and they were struggling. But our machine had run well in the rain during the morning practice, so I thought we could get near the top [in the qualifying]. But, when I got out on the track the tires didn’t warm up well, so I had to work hard to get them warmed up. So, I was really surprised to get such a good time. I don’t know what the weather will be like for tomorrow’s race, but I will be going all out whether it is wet or dry.”

Masataka Yanagida: “I wasn’t able to get in much time running when the track was dry, but the machine’s condition felt great. The conditions had been better for the cars running earlier in the Super Lap, so I honestly didn’t expect us to get the pole position. Despite that, Ronnie brought out the potential of the machine and the tires to the max and made an amazing run.” 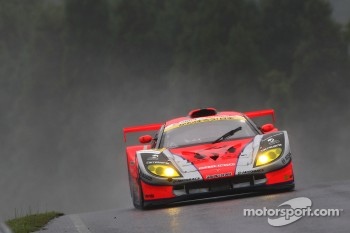 Shinichi Takagi: “From this year we are using Bridgestone tires and we still haven’t had time to do enough testing with them. Nonetheless, they made us some tires that have really performed well. Also, the team has made us some new parts, primarily in the aerodynamic parts. Rather than trying to run 120% in the Super Lap, I concentrated on not making any mistakes and ran at about 102%. We don’t know what the weather will be for the race but I think we would have a bit more of an advantage in the rain. But, I want to see us finish first even if it is dry.”

Kosuke Matsuura: “Even though I didn’t drive to win this pole position, I’m very happy. It will be my first time starting from the very front in a SUPER GT race. Takagi san did a very good job but I think we were also helped by some very good tires. I hope to have a good race tomorrow whether it is wet or dry.”