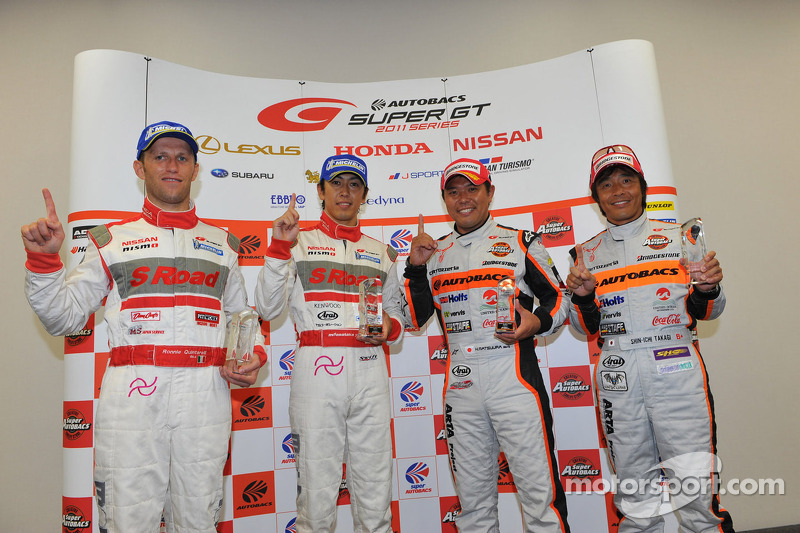 Rain again! This time it is Yanagida with a super run 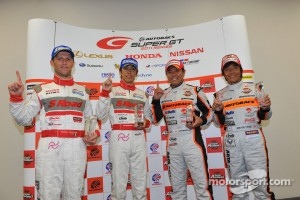 The qualifying for the “40th International Pokka GT Smmer Special”, Round 5 of the 2011 AUTOBACS SUPER GT was held at the Suzuka Circuit (one lap 5.8075km) in Mie Pref. on August 20. In this qualifying, the S Road MOLA GT-R driven by Masataka Yanagida won the GT500 class pole position. With this result, the S Road MOLA GT-R with the driver pair of Yanagida and Ronnie Quintarelli will start from the front row in the race on the 21st.

The qualifying for this round was held in a “knock-out” format. In this system the second qualifying stage is run in three sessions (Q1, Q2, Q3). In the first two of these sessions the slowest qualifiers are “knocked out” of the competition and not able to move on to the next session. Then the race grid order for the top places is decided by the time trial performances of the teams remaining in the final session (Q3).

On this day, rain was predicted to fall in the Suzuka area from the afternoon, but when Q1 started at 12:55 the skies were cloudy and the track condition was still dry. In this session the fastest time of 1’53. 991 was recorded by the Weider HSV-010 (Loic Duval), Honda’s ace team that makes Suzuka its home circuit.

The running time for Q1 was effectively 40 minutes, but for each of the ensuing Q2 and Q3 sessions the teams had just 10 minutes to complete their timed laps in what is essentially a one-shot contest. If this wasn’t enough to set a tense stage, a heavy rain began to fall just prior to the start of Q2, making the track surface wet and extremely slippery. In these difficult conditions it was the Lexus DENSO SARD SC430 (Hiroaki Ishiura) that recorded the fastest lap with a time of 2’07.586.

The seven teams that qualified for Q3 also had to make their runs in the rain. In an almost predictable outcome, the fastest time in this session was run by the same S Road MOLA GT-R team that won the pole position in the rain in the previous round. In that round it was Ronnie Quintarelli at the wheel of the S Road MOLA GT-R, but this time at Suzuka it was teammate Masataka Yanagida making the “time attack” in Q3 to win the pole. Handling the slippery track with seeming ease, Yanagida recorded a time of 2’08.206 to beat the competition. For Yanagida, this was his second career GT500 pole position, following one at Suzuka in 2007. For the team it was the second consecutive PP, and it was also the second this season for the Nissan GT-R.

Seeing these interesting qualifying results in which different Honda HSV-010, Lexus SC430 and Nissan GT-R machines ran the fastest times in the different conditions of Q1, Q2 and Q3, nothing can be taken for granted in the 500km race on the 21st.

In the GT300 class, the ARTA Garaiya driven by Kosuke Matsuura won the pole position. For the Garaiya team as well, this was the second consecutive pole position, and its 10th overall. For Matsuura it was his first personal PP.

Masataka Yanagida: “The weather report was predicting rain from evening, so I didn’t expect it to rain for the qualifying. I felt good in the morning practice and was thinking we could do pretty well even if it were run in dry conditions. But, when the rain started falling I felt we had an even better chance of getting a second consecutive pole position. So, I am glad that I was able to get it. I think the team chose the right tires. And, of course, the performance of the Michelin tires was very good. In tomorrow’s race we will be carrying a big weight handicap, so I can’t say what will happen, and it will depend on the conditions as well. But, I want to have a good race, taking full advantage of this pole position.”

Ronnie Quintarelli: “As Maa (Masataka Yanagida) said, we were getting pretty good lap times on the dry track, and we finished 4th in Q1 when it was dry. Then, when it started raining, I thought we had a good chance [of getting the PP] in Q3. As I thought, the team’s tire choice went well and in the end Maa ran a terrific lap. Today, the tire choice, strategy and the teamwork were all fantastic. If the track is dry for tomorrow’s race I don’t think it will be easy because the machine is heavy [with handicap weights], but since we will be starting from the front and I should be able to run at my own pace like in the last race, and since the tire performance should be dependable and we are now at the top of the series ranking, I want to avoid making any mistakes and finish the race with as many points as possible.”

Shinichi Takagi: “We got this good time because [Matsuura] ran just like I told him to (laughs). The times were good from the first lap, so I thought everything was perfect. During the first qualifying session a number of things went wrong and I was feeling depressed, but some of the other cars were unable to clear the sessions, and that enabled us to move up in the order. Then, when I looked up at the sky and saw the rain clouds approaching, I though we had a good chance. So, in that sense, I felt like we had a complete reverse of luck all at once.”

Kosuke Matsuura: “I am very happy. We got our second pole position in a row, the rain performance of the Bridgestone tires and the setup were both good, so I am happy for a number of reasons. I felt we have a package so good that either of us could have driven it to the PP. And, although it happened to be me who got it, this was a pole position that the whole team won, so I am happy to realize that too. It will depend on what the weather does tomorrow, but if it rains I think we will have a good advantage like our results today showed. If it is dry we will have a lot to worry about, but I know the engineers will be thinking about the setup tonight and I want to see us get everything worked out well for tomorrow’s race.”