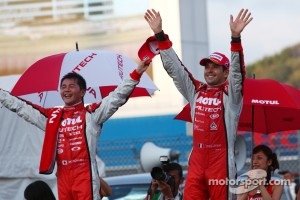 A third victory of the season, his second in succession, saw Benoit Treluyer bow out with honours at the final round of the Super GT campaign as he and Autech team-mate Satoshi Motoyama secured the crown of vice-champions.

With sixteen points separating the duo from the S Road MOLA squad’s Nissan GT-R of Masataka Yanagida and Ronnie Quintarelli, Treluyer and Motoyama knew that victory was an absolute requirement were they to have any hope of clinching the title. At the same time, they needed their opponents to score no more than three points, and so it was with little thought for the maths involved that the Franco-Japanese pairing approached the weekend.

Rain fell from the first practice session, much to Treluyer’s frustration. “In these conditions,” he later reflected, “we knew that the Michelin tyres would have an advantage. I decided to go with used tyres in Q1 so that Satoshi would benefit from a new set in Q2. He progressed to Q3 without any problems, following which I got back behind the wheel. Unfortunately, as soon as I took to the track on a set of intermediate hard tyres heavy rain began to fall. It was more than the drizzle we’re used to in my home region of Normandy, and it meant I could only set the fifth fastest time.”

During the following day’s warm-up, the same dark clouds welcomed the cars for 13 minutes on-track, an extension of the usual eight minutes running allotted. “I used the additional time to bed the tyres so that my team-mate could be fast from the start of his stint, and I did two laps with a new set in order to check the behaviour of the car,” reported Treluyer. “Normally we avoid using a fresh set for this, but it was important to see how the car was set-up in dry conditions.”

When the lights went out Benoit made a good start and moved up to fourth place. After around ten laps, which were made tricky by the full fuel tank and the need to save tyres, the Frenchman started to attack. “I caught the #12 GT-R of Matsuda/de Oliveira, who were running on super soft rubber, before they made their pitstop. There were now only two cars in front of us: the #39 Toyota of Ishiura/Iguchi and the #46 GT-R of our title rivals, Masataka Yanagida and Ronnie Quintarelli, both of which were running on Michelin tyres. As soon as I got behind the #39 it headed into the pits. I used this opportunity to set two qualifying-speed laps in order to create a gap that would allow Satoshi to get back out in front of them.”

After a perfectly executed driver and tyre change by the Autech team Motoyama exited the pits ahead of the Toyota. With less fuel on board he was able to push the tyres harder and closed quickly on the #46 GT-R, which he then overtook in traffic.

“Unfortunately, after that they remained right behind us,” said Benoit. “If qualifying had not been wet we would have had a better chance of taking the championship, as it would have been more difficult for them. Thanks to the efficiency of the Michelins in wet conditions they started ahead and managed their race well.

“But they have been consistent and made no mistake, so they fully deserve their title. In the end, what cost us were our tyre errors at Sepang in June and at Suzuka in August. Also, we have paid the price on the engine side, with the new spec being introduced too late in the season.” The new powerplant was only run at the last two rounds – both of which were won by Tréluyer.

“As for the championship,” Benoit said positively, “Nissan finished in the top two positions, with one car on Michelins and the other on Bridgestones. Personally, I am happy to be vice-champion. I think that the team can be very proud of the work they’ve done over the past two seasons. We developed the Michelin tyres in 2010 and paved the road that the S Road MOLA team was able to follow to success.”

At the ‘Fuji Sprint Cup’ (November 11-13), an end-of-season Super GT and Formula Nippon celebration, Benoît will be doing everything he can to honour his second place by climbing the highest step of the podium for the fourth time this year.