Motoyama races past 11 machines to set up dramatic victory!

Second win of the season for the MOTUL AUTECH GT-R

The SUPER GT IN KYUSHU 250KM, Round 7 of the 2011 AUTOBACS SUPER GT, was held at the AUTOPOLIS (lap = 4.674 km) in Oita Pref. on Oct. 2. The GT500 race was won by the MOTUL AUTECH GT-R (Satoshi Motoyama/Benoit Treluyer) after an amazing climb from 12th position on the starting grid to take their second win of the season.

The race started exactly at 14:00 and the early going developed into a duel between the pole-starting DENSO SARD SC430 (Hiroaki Ishiura) and the S Road MOLA GT-R (Ronnie Quintarelli) for the lead. Meanwhile, the crowd witnessed an amazing charge by Satoshi Motoyama in the MOTUL AUTECH GT-R, having started from 12th position on the grid. After winning the opening round of the season at Fuji Speedway, Motoyama and teammate Benoit Treluyer had a difficult mid-season. Now they were making up for it with a brilliant display of speed, as Motoyama passed one machine after another before finally overtaking the DENSO SARD SC430 on the 25th lap at mid-race to grab the lead. After taking the lead, Motoyama brought the MOTUL AUTECH GT-R in for its routine pit stop, letting the DENSO and S Road teams move ahead temporarily. After the pit stop, second driver Benoit Treluyer passed these two machines to regain the lead. From there, Treluyer drove on unchallenged to the checkered to give the team its second victory of the season. 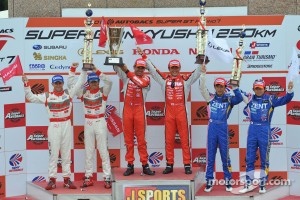 It looked as if the DENSO machine driven by Takuto Iguchi would win the battle for 2nd place until it suddenly came to a stop at the first corner with two laps remaining in the race. With this tragic turn of events, the S Road MOLA GT-R (Masataka Yanagida) took 2nd and the ZENT CERUMO SC430 came home 3rd.

With this result, the title race will come down to the final round at Motegi (Oct. 15-16). The points from this race put the S Road MOLA GT-R team of Masataka Yanagida and Ronnie Quintarelli 16 points ahead of their only drivers’ title rivals, Satoshi Motoyama and Benoit Treluyer of the MOTUL AUTECH GT-R team.

In the GT300 class, the pole-starting R&D SPORT LEGACY B4 (Tetsuya Yamano/Kota Sasaki) went on to win the race. This is the team’s second victory of the season, following their win at Suzuka in round five.

The title race for the GT300 drivers’ championship comes down to two teams in the final round, the JIMGAINER DIXCEL DUNLOP 458 (Tetsuya Tanaka/Katsuyuki Hiranaka) with a five-point lead over the HATSUNEMIKU GOODSMILE BMW team (Nobuteru Taniguchi/Taku Bamba).


I am extremely happy. To be honest, before the race I couldn’t see us possibly winning.

Satoshi Motoyama: “I am extremely happy. To be honest, before the race I couldn’t see us possibly winning. But, the machine had a very good feel and I had the feeling that we could do well. My initial plan was to hold back somewhat in the early stages of the race and push harder in the middle stages before turning the machine over to Benoit (Treluyer), but I actually made a bad start. Once I was running I realized that the car, the engine and the tires were all performing well, so I decided to push and push harder with the image in mind of how Benoit always drives [so intrepidly] (laughs). In the final round we will be competing for the title, but the 16-point gap will not be a small one to overcome. Still, our goal in this race was at least to win and increase our title chances. We were able to achieve that, so in the final round we will not give up as long as there is a chance of victory.”

Benoit Treluyer: “It was truly an exciting race and an enjoyable one for me personally. It was especially absorbing to watch Motoyama passing one machine after another. Even though I made a mistake in yesterday’s qualifying [spin and crash], the balance of the machine was extremely good. During today’s practice and warm-up I was able to verify how good the set-up was. That is why I was able to overtake the leaders as well. The team and the tire maker all did a great job. But, most of all it was Motoyama. We had a hard time in mid-season but this win now has surely boosted the motivation of everyone. I want to do my best to help us win the championship.” 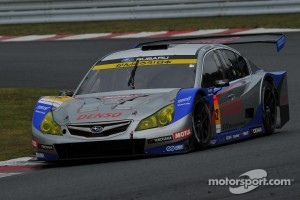 Tetsuya Yamano: “I am tremendously happy. In SUPER GT it is very difficult to win two races in a season, so I almost can’t believe we have done it. The biggest factor in this has been the way the team has gotten the car into such perfect condition. Also, the fact that Kota [Sasaki] got us the pole position made it an easy race for me. I wanted to build up a lead in the first three laps so I could run away in the clear. After that I drove with tire [wear] management in mind. In order to help with the decision of what tires Kota would use in the second half, I tried to minimize strain on my tires. Compared to the first half of the season, there has been a lot of progress in our Legacy B4. For that reason if nothing else, I want to do my best in the last round so we can say this was our best season.”

Kota Sasaki: “I’m relieved now because I have always said that I like Autopolis and I feel it is a course where I drive well and it would have looked bad if I didn’t win here (wry laugh). This time the car has been in good condition since we got here and it only took a few slight adjustments to get a great set-up. I am really grateful to the team for this. The only worry was the tire, but Yamano-san save wear on them very well and made it easy for me to be confident in the tire choice and enjoy a relatively easy race. Actually, today is Yamano-san’s birthday, so this win has been a great birthday present.”