Takashi Kogure drives the Weider HSV-010 to his first pole position of the season!

The qualifying for Round 3 of the 2011 AUTOBACS SUPER GT series, was held at the Sepang International Circuit (lap = 5.542 km) in Malaysia on June 18. In the GT500 class the Weider HSV-010 driver Takashi Kogure won pole position. With this, the Weider HSV-010 driven by Takashi Kogure and Loic Duval will start from the front position on the first row in the race on the 19th.

The qualifying for this round was run in a Super Lap format. The first qualifying session narrowed down the field to the top ten that would move on to the second session, the Super Lap, based on the order of fastest lap times. The results of the Super Lap determined pole position and the order of the top ten places on the starting grid for Sunday’s race. The grid positions from 11th place down were determined by the qualifying times from the first session. This is a qualifying format that allows the drivers to run their timed laps without concern for the other competitors.

In the morning’s first qualifying session the fastest lap was run by S Road MOLA GT-R with a time of 1’56.551. Following with the second fastest time by 0.660 seconds was last year’s GT500 champion, the Weider HSV-010.

I was determined to get the pole position this time no matter what.

Then the GT500 class Super Lap got underway at 17:13 in the afternoon, with the 10th fastest qualifier as the first to run its timed lap. Running second to the last in the order was the Weider HSV-010 driven by Takashi Kogure. Driving very smoothly and fast, Kogure recorded the fastest time to that point with a 1’55.984 lap, the only one to dip under the 1’56 barrier. Running last, Ronnie Quintarelli in the S Road MOLA GT-R was unable to break the 56-second barrier and had to settle for 2nd position. This result gave Kogure his first pole position of the season.

For Kogure it was his 12th career PP and his first since the last round of the 2010 season. For the Honda HSV-010 GT that debuted last season, this was its second consecutive PP of the 2011 series and its sixth counting from last year.

In the GT300 class, the HATSUNEMIKU GOODSMILE BMW driven by Nobuteru Taniguchi took the pole position with a time of 2’8.499. This was Taniguchi’s third career PP and the fourth for BMW. However, it is the first PP for the new BMW Z4 model that has debuted in the SUPER GT this season.

No. 1 Weider HSV-010 [GT500]
Takashi Kogure: “I am truly happy with this. The machine has been performing well this season, but in the last two rounds things didn’t go as hoped and we couldn’t get good race results. So, I was determined to get the pole position this time no matter what, and I felt the same kind of pressure today that I did in the last round of last season [when the title depended on the result]. I felt better grip than in the morning session, and since the machine was set up for stable performance I was able to push hard with confidence. We only have a small weight handicap this time and we have the pole position, so I think we have to win tomorrow.” 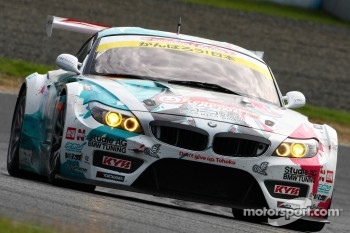 No. 4 HATSUNEMIKU GOODSMILE BMW [GT300]
Nobuteru Taniguchi: “The main strength of our car [in part because of the regulation] is its speed on the straights. So, to tell you the truth, I didn’t think it would do well on a course like Sepang where cornering speed is especially important. So I was a bit surprised that we were able to compete among the leaders from the morning session. This time we made a special request and had a engineer come in from Europe to work on the engine. I am grateful for that and for all the work that the team did on the car [within the no-modification requirements of the regulation]. This circuit is very hard on the tires [high wear rate], so I will be thinking about tire control during tomorrow’s race. But, since we are starting from pole position and are fast on the straights, I am determined not to let anyone past me (laughs).