The MOTEGI GT 250 KM Race, Round 8 (final round) of the 2011 AUTOBACS SUPER GT, took place at the Twin Ring Motegi (lap = 4.801 km x 53 laps) in Tochigi Pref. on Oct. 16. The race was won by the MOTUL AUTECH GT-R with drivers Satoshi Motoyama and Benoit Treluyer. As for the GT500 class Drivers’ title, it went to the 2nd place finishers in this race, Masataka Yanagida and Ronnie Quintarelli (S Road MOLA GT-R). The season Team title went to Yanagida and Quintarelli’s team MOLA.

In the GT300 class, the pair of Nobuteru Taniguchi and Taku Bamba (HATSUNEMIKU GOODSMILE BMW) won the race, and in doing so also won the season Drivers’ title and the Team title.

The first real developments in the came in the middle stages when the teams made their pit stops and change drivers. After some quick pit work and a change of drivers from Treluyer to Satoshi Motoyama, the MOTUL GT-R returned to the track. From here it was a match race for the lead with the S Road GT-R driven by Masataka Yanagida. Motoyama rapidly narrowed the gap, which at one point had been a full five seconds. Then on lap 40, he took advantage of a moment when Yanagida was caught behind a back marker to finally pass him and take the lead. Once in the lead, Motoyama drove the MOTUL AUTECH GT-R on to its third win of the season. 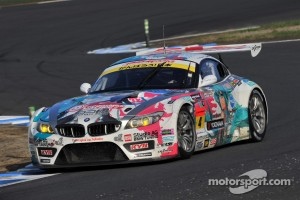 By finishing the race in 2nd place, Yanagida and Quintarelli of the S Road MOLA GT-R team maintained their lead in the season ranking to win the title. For both drivers this is their first GT500 Drivers’ title, and their team MOLA won the Team title in its first season competing in the GT500 class. Also, this race extended the season record for the Nissan GT-R to five wins out of this year’s eight rounds and three pole positions. Meanwhile, Motoyama extended his own record for most wins of any GT500 driver to 15.

In the GT300 class the HATSUNEMIKU GOODSMILE BMW started from pole position and ran on to victory without being challenged. This gave the team the most wins of the season at three and put the team atop the season ranking to win both the Drivers’ and Team titles.

No.23 MOTUL AUTECH GT-R
Satoshi Motoyama: There is a clear sense of achievement because we came with the aim of winning this race, but I am still sorry that we couldn’t get the championship title. I was confident we could win this race due to our prior tests and what we learned about tire choices and machine set-up. Still there were difficulties because of the weather, so we had Treluyer drive with restraint in the first stint and the pit stop timing, the pit work went very well and I was able to get back into the race in second position. Then all I had to do was to push hard and pass No. 46 to take the lead. Hat made the race easy for me in a sense. The fact that we were able to win three races this season and still not win the title means that we still aren’t as strong as we need to be. Going forward we will think about what was lacking and try to remedy it.” 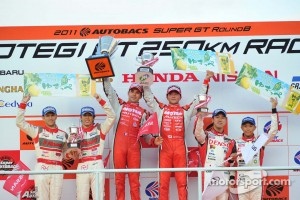 Benoit Treluyer: “I am happy that we won, but it is still a shame that we didn’t get the championship title. In the race I started with a full tank, so the machine’s performance and the braking were difficult, which made it hard out there for me. But, from around the 15th lap [as the fuel load lightened] the feeling got better. Also I was thinking about which tires Motoyama should use on his stint, and we ended up using the same type of tire I had. That turned out to be the right decision. The pit work went perfectly and the race overall went very well. This season we made some strategic mistakes at Sepang and Suzuka that resulted in no-pointers. That hurt us in the title race.”

No. 46 S Road MOLA GT-R
Masataka Yanagida: “I still can’t really believe that we are the champions. I want to thank my teammate Quintarelli, the team that have competed with me this season, and also S Road for all their support and the Nissan fans who cheered for us and all the spectators. I came here to the GT500 as last year’s GT300 champion, but I never expected to win the championship here as well. I can’t believe it. To be truthful, the GT500 class is really tough and I had a lot of worries about how we would do as a team new to this class. But, with the repeated testing that we did, we began to get confidence. The win at SUGO was an especially big confidence-builder for us, and it made us feel that we might win the title.”

Ronnie Quintarelli: “I won the F3 championship in 2004, but to win this championship in the GT500 class of the marvelous SUPER GT makes me extremely happy. It has been a wonderful year. I felt sure that we could compete near the top this year, but I never dreamed that we would win the championship. In our first tests of the year both the GT-R and the Michelin tires performed well, and that gave me confidence. When we fulfilled our goal of getting on the podium in the three consecutive summer races and won SUGO on top of it all, I felt that we would do well for sure.” 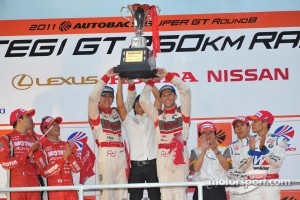 No.46 S Road MOLA GT-R
Toshiomi Oeki: “We started competing in the GT500 class this season, and for giving us this chance I want to thank the people at Nissan Motors and NISMO. I also want to thank S Road for supporting us. For the team it was our first time in GT500, but our drivers were experienced in GT500 and Michelin had worked with NISMO in developing tire last year. So, although there was a good bit of trial and error, we weren’t really worried. Our initial aim was just to get a first win in the class, and since the Michelin tires are good in summer heat and perform well even with a heavy load of handicap weights, we hoped to get a win in one of the three summer races, at Sepang, SUGO or Suzuka. We did get one win and also two more podium finishes in those three races, which put us on top in the ranking and started us thinking about winning the championship. But, today I wasn’t thinking about the championship much, until the last ten laps when Yanagida was being chased hard (grimace). Today the season ended, so I haven’t started thinking about next year yet.”

No. 4 HATSUNEMIKU GOODSMILE BMW
Nobuteru Taniguchi: “I want to begin by thanking our team, Yokohama Tire and all the people who have cheered for us. I am very happy. This is my tenth year in GT racing but in the last several years I have been competing for the title but unable to win it. Now I finally feel that satisfaction. I am happy and relieved, and I am so excited that we were able to come from behind to win it as dramatically as we did. For today’s race the plan was that I would start if it was wet or the track condition was difficult. If it was dry we were going to have Bamba start. After the morning practice we decided to have Bamba start for the first time. He drove so hard for us and kept the lead from the pole all the way to the pit stop and my stint, so I was determined to keep the lead no matter what.” 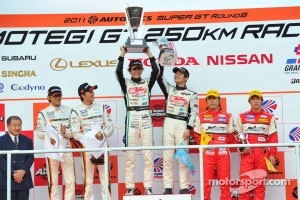 Taku Bamba: “I am just very happy. Our team is supported by a lot of private individual sponsors and I want to thank them all. I am also grateful to the team, Yokohama Tire and Taniguchi san, who has trained me this year. To tell the truth, what I feel more than anything is a sense of relief. When we were coming back from the last race, Taniguchi san begged me to help him win the championship, and in the two weeks since then I feel I have done everything I could think of to do that. So, even though I was starting for the first time, I was able to concentrate and drive with the same feeling as always, trusting that would lead to a good result. I was ready for it mentally.”

No. 4 HATSUNEMIKU GOODSMILE BMW
Itsuo Ohashi: “When we were putting together this team I wanted to be sure to make it a “winning team.” That is why I asked Taniguchi to join us as driver. In the garage as well we got Ukyo san (advisor, former F1 racer) and other members with winning capabilities. When Taniguchi joined the team I wondered if he could get along with Bamba (wry laugh). The result was that Bamba made a lot of progress this year. So much so that I was confident when I asked him suddenly to be the starting driver for the first time. That is how strong he has become mentally. But, I must admit that I was really worried when we had a chance to get our first win at Sepang and Bamba was being chased down by car No. 11 at the end (laughs). Our team is supported by many private individuals as sponsors and I can feel their momentum now and hope that we will be able to work with them from now on as well. So I want to make the team organization even stronger so that we can win again next year.”